Yellow fever epidemic threatens to spread from Angola to China

Action needs to be taken now to avert a global catastrophe, say experts in the International Journal of Infectious Diseases 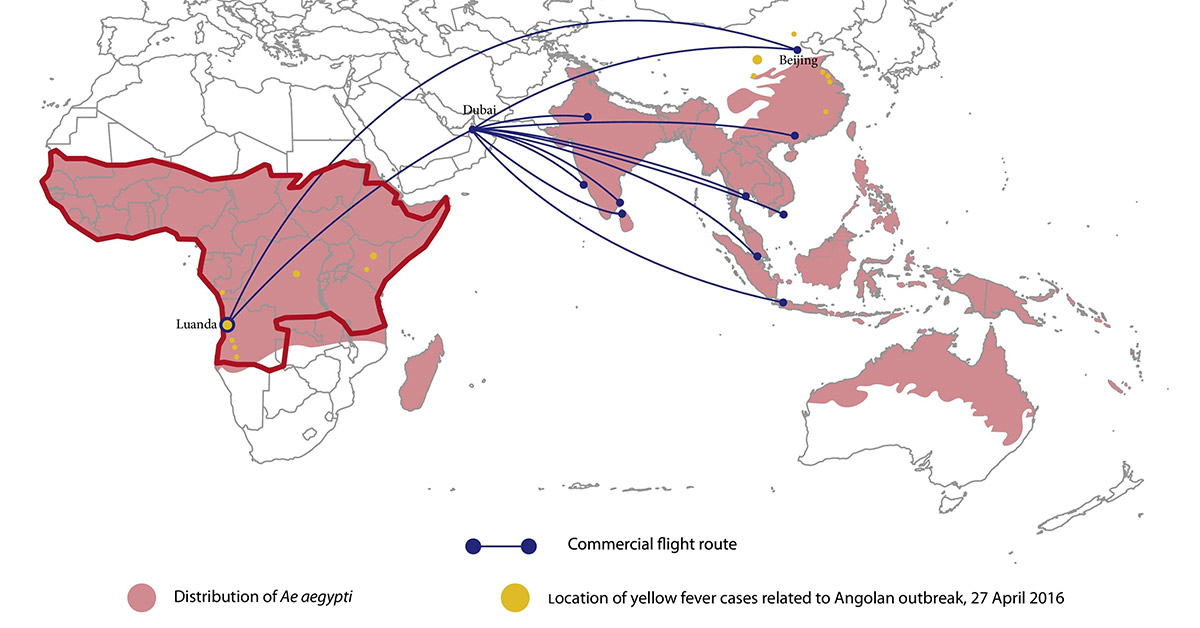 The spread of yellow fever (YF) is a global health threat. In response to current outbreaks in Angola, other African countries, and China, which represents the first ever documented cases of YF in Asia, the World Health Organization (WHO) convened an emergency committee last week to underscore the severity of the outbreak. In the current issue of the International Journal of Infectious Diseases, noted infectious disease authorities from South Africa and Singapore explain the epidemiology and ecology of YF and discuss the factors that can increase and decrease the likelihood of progression from outbreak to epidemic.

While the YF vaccine is very effective, the WHO is concerned that the outbreak in unvaccinated populations poses a strong risk of epidemics both in Asia and Africa. However, despite repeated references to the limited supply of vaccine, WHO did not declare the present outbreak “a global health emergency,” because the outbreak appears to be coming under control, and did not recommend lowering the dose of vaccine to extend the supply.

What is yellow fever?

Yellow fever is an acute viral hemorrhagic disease transmitted by infected mosquitoes. The "yellow" in the name refers to the jaundice that affects some patients. Symptoms include fever, headache, jaundice, muscle pain, nausea, vomiting and fatigue. A small proportion of patients who contract the virus develop severe symptoms and approximately half of those die within 7 to 10 days.

Unfortunately, this is a misapprehension of the actual situation. As of May 19, Angola has reported 2,420 suspected cases of YF with 298 deaths, according to the WHO Situation Report of May 16. Among those cases, 736 have been laboratory confirmed. Despite vaccination campaigns in Luanda, Huambo and Benguela provinces, circulation of the virus in some districts persists. As long ago as February, a WHO expert, after visiting the country, reported that the true figures could be actually10 to 50 times more, meaning many thousands of cases and hundreds of deaths.

In most of the world, YF is the subject of history books. Responsible for tens of thousands of deaths, the last recorded outbreak in Europe was in 1905 in Gibraltar and in the United States in New Orleans the same year. While YF traveled slowly around the world by ship in the past, it can now move quickly by air, infecting unvaccinated populations overnight. With this increasing risk, the world's annual vaccine production of just over 40 million doses is not nearly sufficient to replenish emergency stockpiles and contain outbreaks if YF follows the same path as dengue, chikungunya and Zika, also spread by Aedes mosquitoes. Historically, market forces have always kept the YF vaccine supply below demand.

The current scenario of a yellow fever outbreak in Angola, where there is a large Chinese workforce, most of whom are unvaccinated, coupled with high volumes of air travel to an environment conducive to transmission in Asia, is unprecedented in history. These conditions raise the alarming possibility of a YF epidemic, with a case fatality of up to 50 percent, in a region with a susceptible population of two billion people and where there is extremely limited infrastructure to respond effectively.

The growing number of imported cases in China shows how critical it is to recognize this risk now in order to take adequate preemptive action so that a global catastrophe can be averted.

Epidemic YF in the Americas was successfully controlled through mass vaccination and mosquito reduction programs. Failure to sustain vector control and vaccination programs has led to the reinvasion of A. aegypti across large swaths of the Americas, as evidenced by ongoing chikungunya and Zika outbreaks. “If sufficient YF cases occur in cities to facilitate urban transmission, we may yet see YF epidemics again in the Americas,” cautions Dr. Wasserman.

In an accompanying editorial, JP Woodall, PhD, of ProMED,  International Society for Infectious Diseases, in Massachusetts, and Thomas M. Yuill, PhD, of the University of Wisconsin-Madison, emphasize that the Angola outbreak could result in the spread of YF outside of both Africa and China and that WHO alone may not have sufficient resources to contain the infection. They suggest that the United Nations may have the necessary funds and can call in multiple relief agencies to attack the epidemic.

They explain that that mosquito control alone has not been successful for stopping dengue fever and outbreaks in the tropics of Zika, another virus carried by A. aegypti. They also have little confidence in border controls being effective due to corruption and inefficiencies.

“In the final analysis, vaccination is the only solution, but there are concerns that the world may run out of doses,” Dr. Woodall and Dr. Yuill write. “There could be a solution. Studies have shown that the vaccine is so potent that one fifth of a dose immunizes just as well – so an existing five-dose vial could protect 25 people. The WHO has the authority to declare temporary use of the lower dose, which would usefully expand the supply.”

Read the study and editorial

The article and editorial are published in the open access International Journal of Infectious Diseases:

The International Journal of Infectious Diseases (IJID) is the official journal of the International Society for Infectious Diseases. IJID is a peer-reviewed, open access journal that publishes original clinical and laboratory-based research together with reports of clinical trials, reviews and some case reports dealing with the epidemiology, clinical diagnosis, treatment and control of infectious diseases with particular emphasis placed on those diseases that are most common in under-resourced countries. The journal is published by Elsevier.