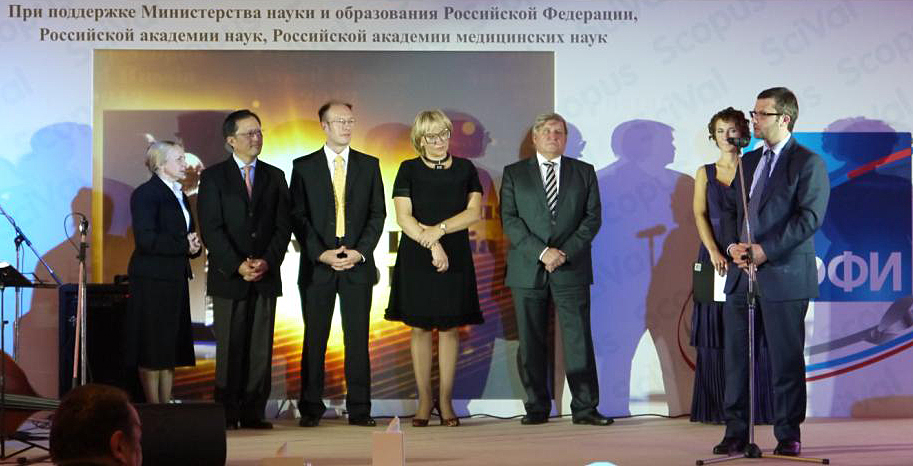 MOSCOW — Elsevier and the Russian Foundation for Basic Research announced the winners of the 2012 SciVal/Scopus Awards today.

Elsevier holds Scopus Awards ceremonies in emerging nations around the world with the idea of supporting a nation's research by recognizing its outstanding scientists. First held in Russia in 2005, they have been co-hosted by the Russian Foundation for Basic Research (RFBR) for the past two years. This initiative is also supported by the R ussian Ministry of Education and Science, the Russian Academy of Science, and the Russian Academy of Medical Science.

This year, the award was named the SciVal/Scopus Award because the selection criteria are based on data from both SciVal Spotlight, Elsevier’s analytics database, and Scopus, the world’s largest abstract and citation database for peer-reviewed literature. Winners are selected by the number of publications and citations over the last five  years in growing competencies, drawn from SciVal Spotlight and from Scopus, as well as the level of activity in RFBR’s programs and grants. 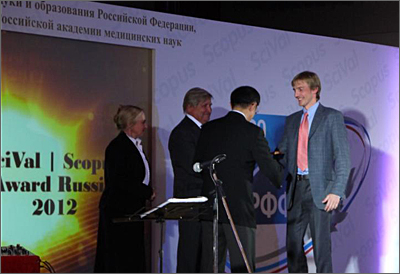 The winners in the five award categories are:

Galina Yakshonakis a Customer Development Manager for Elsevier in Russia and Belarus. She is based in Moscow.[/note] The partnerships that support the awards go well beyond the event itself.

“The results of 2011 showed us how effective the interaction between the global leader Elsevier and RFBR can be,” said Dr. Vladimir Eliseev, Director of RFBR, at the award ceremony. “Providing our researchers with high-quality scientific information is an important factor in turning Russia into a dynamic, high-tech, innovative society. Therefore, we expect and rely on the stable, long-term and mutually beneficial cooperation with Elsevier. With new Elsevier solutions, we can distinguish the talented and most promising Russian scientists, who work at the front edge of world science.”

Elsevier Chairman Youngsuk "YS" Chi remarked: “Elsevier is honored to continue the tradition of recognizing the important achievements of Russian researchers. We are a committed partner to Russia, and we aim to help researchers grow and flourish by providing the highest quality content and innovative solutions as possible. The discoveries made by these talented individuals reflect the bright future of Russian science, and we are proud to support them.”

This year’s award ceremony was preceded by an international congress called The Ways of Russia’s Development: from Fundamental Research to Innovation Technologies. Speakers included Mikhail Alfimov, Chairman of the ROSNANO Board on Science and Technologies and Director of the Center of Photochemistry; YS Chi, Chairman of Elsevier; Dr. Kevin Downing, Chair of the QS-MAPLE International Advisory Committee and Director Knowledge, Enterprise and Analysis, City University of Hong Kong; Dr. Martin Gitsels, Head of Corporate Research & Technology and Vice-President of Siemens LLC; and other specialists in science and education.