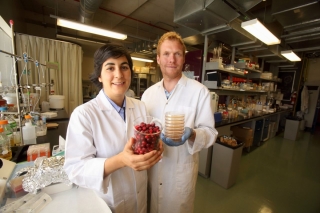 Professor Nathalie Tufenkji, PhD, a board member of Colloids and Surfaces B: Biointerfaces and corresponding author of the article, with Ché O'May, PhD, a postdoctoral fellow, in her Biocolloids Research Group laboratory. (Photo by Owen Egan, McGill University)[/caption]

For over 100 years, the consumption of cranberry products has been anecdotally associated with prevention of urinary tract infections (UTIs). Scientists have long questioned if this is myth or scientific fact.

Some recent studies have suggested cranberries prevent UTIs by hindering bacteria from sticking to the walls of the urinary tract. Phytochemicals known as proanthocyanidins (PACs) create this hindrance, but the mechanism by which cranberry materials may alter bacterial behavior has not been fully understood until now.

A research team from the Department of Chemical Engineering at McGill University in Montreal is shedding light on the biological mechanisms by which cranberries might impart protective elements against infections. Dr. Nathalie Tufenkji, Associate Professor in the Department of Chemical Engineering and Editorial Board Member of Colloids and Surfaces B: Biointerfaces, spearheaded two studies that add new evidence of cranberries' effects on UTI-causing bacteria, as well as highlighting the potential for cranberry derivatives to be used to prevent bacterial colonization in medical devices such as catheters.

In the first study, published in the Canadian Journal of Microbiology, Tufenkji and her team report that cranberry powder can inhibit the ability of Proteus mirabilis to swarm on agar plates and swim within the agar. P. mirabilis is a bacterium frequently implicated in complicated UTIs. The team's experiments also reveal increasing concentrations of cranberry powder reduce the production of urease by the bacteria. Urease is an enzyme that contributes to the virulence of infections.

This research has been featured by various media outlets, including theDaily Mail, the

The results of this study build upon previous work by the same McGill lab. The previous study showed cranberry materials hinder movement of other bacteria involved in UTIs. The lab performed a genome-wide analysis of a uropathogenic E. coli, which revealed that expression of the gene that encodes for the bacteria's flagellar filament was decreased in the presence of cranberry PACs.

These findings have significant implications because bacterial movement is a key mechanism for the spread of infection, as infectious bacteria literally swim to disseminate in the urinary tract and to escape the host immune response.

"While the effects of cranberry in living organisms remain subject to further study, our findings highlight the role that cranberry consumption might play in the prevention of chronic infections," Dr. Tufenkji said. "More than 150 million cases of UTI are reported globally each year, and antibiotic treatment remains the standard approach for managing these infections. The current rise of bacterial resistance to antibiotics underscores the importance of developing another approach.

"In the second study, published in published in Elsevier's journal Colloids and Surfaces B: Biointerfaces, Dr. Tufenkji worked with Dr. Showan Nazhat, a biomaterials expert and associate professor in McGill's Department of Mining and Materials Engineering. The findings of this study reveal cranberry-enriched silicone substrates impaired the spread of P. mirabilis. These results point to potential use for cranberry derivatives to hinder the spread of germs in implantable medical devices such as catheters, which are frequently implicated in UTIs.

"Based on the demonstrated bioactivity of cranberry, its use in catheters and other medical devices could someday yield considerable benefits to patient health," Dr. Tufenkji said.

"Food studies and the understanding of how food impacts health on a molecular level is an increasingly important area of study," said Rob van Daalen, Publisher for the Elsevier's portfolio of Physical and Theoretical Chemistry journals.

Colloids and Surfaces B publishes the latest fundamental and applied research on physio-chemical interactions at the molecular level in biological systems. The articles are relevant to people in the medical, pharmaceutical, biotechnological, food and cosmetic fields.

Both articles are freely available: 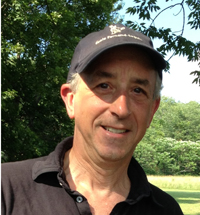 Chris Chipello is a senior communications officer at McGill University. Previously, he worked as a journalist for more than 20 years.