Sandra Millers Younger helps Elsevier talk about science; telling her own story was much harder

Sandra Millers Younger is not your typical "disaster expert," a term that might conjure images of some craggy survivalist — college professor meets The Deer Hunter. It's a title that Sandra – an elegant consultant with a slight Southern accent and a long-time Elsevier collaborator – seems amused by. It is, she tells me, the way she has been billed during recent TV appearances to promote her new book, The Fire Outside My Window: A Survivor Tells the True Story of California's Epic Cedar Fire. With wildfires hitting the global headlines once again, you might think experts are in demand, but Sandra views herself more modestly — as a storyteller. Speaking from her home in southern California – the line is so clear it has me thinking of mountain air – she explains how she works with managers and entrepreneurs "helping them unlock the power of their own stories" to better comprehend their mission and "attract, engage and transform their ideal clients."

Sandra has worked extensively with Elsevier, too, contributing to a range of communication projects from Library Connect and the The Academic Executive Brief to Professor Alan M. Johnson's handbook Improving Your Research Management. She has also written for Elsevier Connect, including an interview with Nobel Chemistry laureate George Olah, which she describes as one of the "biggest kicks" of her career.

While Sandra is familiar with the scientific world — she spent more than five years as head of publications at San Diego State University – she insists that "a story is ultimately much stickier than graphs and charts.

"Our brains are hardwired to respond to stories," she explains. "They are the cultural currency we use to pass on our knowledge from generation to generation. It's what links the age of multimedia to the Neolithic campfire." 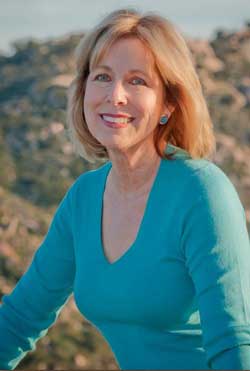 Sandra may be an expert in helping business clients to talk about their goals and accomplishments, but things were different when it came to writing her own story.  The Cedar Fire of 2003 is still the largest recorded California wildfire, a blaze which swept over a large part of San Diego County, fueled by the Santa Ana winds, consuming dry vegetation and ultimately killing 15 people, 12 of them the Youngers' neighbors. It was one of the most destructive fires ever to have hit the western United States — and an experience from which Sandra was lucky to escape with her life.

I ask Sandra how writing about the fire differed from the kind of storytelling she practices in her professional life. After a pause, she tells me that the real problem was the absence of a "Big Why" – a single narrative objective, like the launch of a product or the clinching raison d'être behind a new start-up. "I mean, why did I live in chaparral country? Why was I the daughter of a man who loved nature so much he'd majored in forestry?

"It's very easy for me to tell a client's story – spotting the 'hole' in someone else's narrative – but it's hard to tell your own. I don't see my own story with same drop-dead clarity."

This quest for objectivity – and the need to accommodate the insistent demands of her own experience – seems to have cost her a considerable struggle. This goes some way towards explaining the book's 10-year gestation period, a time during which Sandra conducted over 100 interviews with firefighters, survivors and the families of those who died, in a bid to establish what really happened.

"It was an evolutionary process," she says. "At the beginning, for instance, I couldn't talk to some people in the US Forest Service because of pending lawsuits. Also, I became more philosophical about our fire experience as time went on. In fact, I was eventually told by my writers' critique group to return to the book and put back some of my original anger!"

The tension between the detached professional journalist and the angry, wounded, bemused  human being eventually came to shape the whole conception of the book. For a long time Sandra was unsure if it would be like The Perfect Storm – Sebastian Junger's bestselling account of the once-in-a-hundred-years storm that hit North America's Eastern seaboard in 1991 – or a personal memoir.  "At first, I felt I had to fight to keep myself out of the story, following my journalistic instincts," she says.

Later, however, she came to terms with her personal involvement, using the thread of her experience to create continuity among otherwise disparate episodes as the fire moved from place to place. These dramatic shifts of perspective give the book a compelling, cinematic character. It is, Sandra tells me, "the only book I know of about a historic fire to be written from a personal, civilian perspective."

Ultimately, it was this fierce sense of personal vocation that carried Sandra through the gruelling composition process. "Of all the stories I've ever chased in 40 years as a journalist, this was the one that wouldn't let me go," she says.

[pullquote align="right"]I became aware that it was my job. If I don't tell this story, I can just quit calling myself a writer.[/pullquote]

Almost immediately after the fire she had become convinced that this was the story she was meant to write – both as a spokesperson for those who died and as someone in an eerily unique position to see the entire picture. "I was amazed no-one else was writing a book about this – it was one of the worst fires anyone could remember. Then I became aware that it was my job. If I don't tell this story," she told herself, "I can just quit calling myself a writer."

Whatever your view of this quiet determinism, it's hard not to be impressed by the chain of chance events – culminating in Sandra and her husband's following a fleeing bobcat through the flames to safety – which has finally brought her to this point. "I made a list of the things which, had they gone the other way, would have been the end of us," she said. "I got to 30 and then quit. It scared me."

Footage of the fire

"Wild" is a hard term to define, and the relationship between wildfires and humanity endlessly complex. The Cedar Fire was started by a novice hunter's signal fire, while deliberate arson remains an all too frequent starting point for fires everywhere. Indeed, in historic times the Native American population of Southern California used fire to clear tracts of forest, just as those Neolithic storytellers are thought to have done across much of the world. While Sandra believes climate change is implicated in the recent preponderance of fires, intensifying the long dry summers and short wet winters that dominate the weather systems of the most susceptible regions, wildfires have been an ecological fact since the emergence of modern vegetation, even playing a major role in the seed dispersal of many plant species.

"Except for the polar ice caps, almost any area with large expanses of undeveloped land can be subject to wildfires," she says. Despite the "normality" of these fires, however, little can prepare an individual for the elemental force of fire on this scale. "To be caught in the wind and smoke reduces a human being to the most fundamental primitive survival mode," she says. "When that bobcat crossed my path, we were both running for our lives; we were peers."[divider]

Sandra Millers Younger on the News

Watch more of her media appearances.

Although she lost her home and possessions in the fire, Sandra and her family continue to live in "fire country." I ask her if this is simply stubbornness, but she cites the claustrophobia of the San Diego suburbs, her father's enduring influence, and the transformative pleasure of living in close communion with the mountains and sky. She speaks of the perceptibly higher energy levels of Wildcat Canyon, where she still lives – and for a moment I look ruefully at the collection of empty coffee cups on my desk.

This domestic idyll is in sharp contrast to the inferno I see on her book jacket, and I ask Sandra how her experiences have changed her. "I was 50 year years old when the fire happened," she tells me, "but I still needed to learn that while we can't control what happens to us, we can control our response. It's a fundamental skill that allows us to live triumphantly whatever our circumstances are."

Feeling that there's something here to sustain many of us, even the office-bound caffeine addict, I put my final question to Sandra: "Is there another book in the pipeline, or like one of those fire-actuated trees, do you need a crisis to make you germinate?"

She laughs and tells me she's now developing a new book about her truffle orchard in North Carolina, planted in conjunction with a mycologist from the University of Sheffield, UK. This, she promises, will be a far gentler affair than the Cedar Fire story, with a simple, clear focus.

Nonetheless, as Sandra rings off to attend her next meeting, she leaves me wondering if The Fire Outside My Window might be a Big Why story after all – culminating not in a business proposition or a product rationale, but in Sandra Millers Younger – Writer, Consultant, Disaster Expert.

As a Communications Manager on Elsevier's Global Marketing Communications Team, Keith Silver briefs customer-facing staff on everything from open access initiatives to new product releases. He also handles communications-based projects, which led him to work with consultant Sandra Millers Younger.