Pilot drew scholars from around the world, with most from Asia and Europe

Now that the application period for our Post-doc Free Access Passport has ended, it’s time to reflect on what we have learned.

We promoted the pilot program via an article in Elsevier Connect, an e-mail campaign to subscribers of Authors Update, our own social media channels, various Elsevier websites and a press release. We were hoping to reach enough early-career researchers through these channels, but we also realized there would be many people who would not receive the message this way. 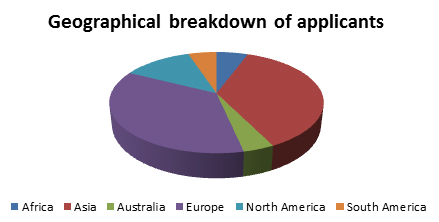 We were therefore very pleased and impressed with the way the news about our program spread over the Internet, in particular on Twitter, where postdocs and postdoc associations tweeted and retweeted the link to the application form. It was great to see how researchers were actively helping to spread the news to people we might not have reached otherwise.

In five weeks, we received 176 applications from young scholars who were interested in receiving six months of free access to our books and journals on ScienceDirect. Applications came from all parts of the world, but mostly from Asia (40 percent) and Europe (34 percent). All areas of science were represented, but the majority of applicants were in the life and physical sciences. Of the 176 applicants, 64 early-career researchers (36 percent) qualified and have been granted a Free Access Passport. So why did we have only so few qualified applicants?

The main reason for non-qualification was that applicants did not yet have a postdoc position after completing their PhD (27 percent of applicants). This tells us that a program like this is just as needed for recent PhD graduates as for people with postdoc experience.

Furthermore, we found that 22 percent of applicants were currently employed and their employment would not end within the next three months (22 percent). For this group of people, the offer probably came a little too early.

Overall, we are pleased with the results of the pilot. It showed us that an offer like this is needed and appreciated by young researchers to succeed in difficult times. We’re not sure yet if or when we’ll repeat or expand this offer because we want to assess usage and collect participant feedback before making a decision. But we are already pleased with the amount of enthusiasm this has generated both inside and outside of Elsevier. [divider]

As Director of Project Management for STM Journals Marketing at Elsevier, Inez van Korlaar(@InezvKorlaar) is responsible for global marketing projects for the STM Journals department, which includes outreach to researchers in their role as an author. She is based in Amsterdam.

Thank you for your comment. I can see that 5 weeks isn't that long. However, despite the short timeframe for application, we haven't had any complaints from interested people that they did not have enough time to apply, so that suggests that for most, it was enough. As stated in the article, we are reconsidering if and how to open up the initiative again, and extending the period for application will definitely be one of our considerations.

I think this was a great idea but the notion of such a time limited subscription was ludicrous, even for a pilot study. Opening it back up would even give you data on an annual cycle for requests, if present.