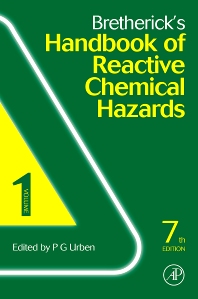 Dr. Peter G. Urben is Editor of Bretherick's Handbook of Reactive Chemical Hazards. Widely regarded as the reference work in this field — this handbook by the renowned industrial chemist Leslie Bretherick is an assembly of all reported risks such as explosion, fire, toxic or high-energy events that result from chemical reactions gone awry, with extensive referencing to the primary literature. It's designed to improve safety in laboratories that perform chemical synthesis and general research, as well as chemical manufacturing plants. Entries are ordered by empirical formula and indexed under both names and  chemical Abstracts Registry Numbers.

As a retired industrial chemist and consultant, Dr. Urben has advised laboratories and chemical manufacturing plants worldwide on safety measures and potential hazards. 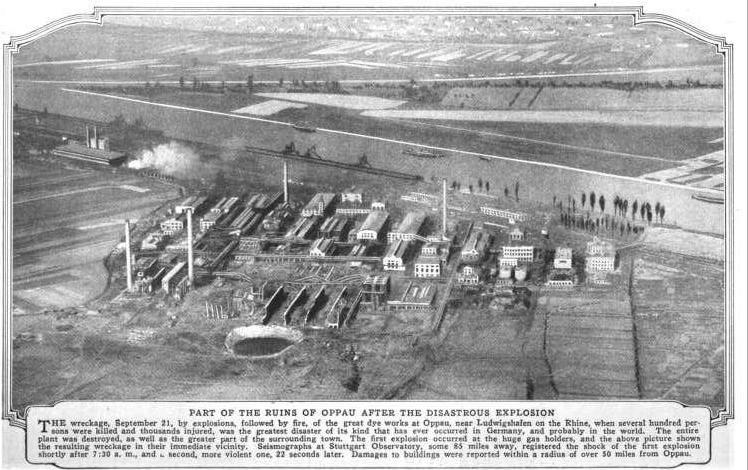 About once a decade, a fertilizer plant blows up with a TNT equivalence reaching well into the tens of tons. Last month, West, Texas, was the site of a massive explosion. A similar catastrophe occurred in Toulouse, France, in 2001. And the granddaddy of all was in Oppau, Germany in 1921, when a BASF plant exploded, killing 500 to 600 people and injuring 2,000 more.

In spite of the frequency of these catastrophic events, the media continue to struggle somewhat in their reporting, challenged by the complex scientific nature of the subject and the demand for instantaneous coverage. For instance, the initial newspaper and radio reports of the West Fertilizer Co. explosion suggested a liquid ammonia tank was the cause.

Look up "fertilizer" inBretherick's Handbook of Reactive Chemical Hazards, that compendium of danger which is the lasting memorial of the late Leslie Bretherick, and you will rapidly discover that Ammonium nitrate is the root cause of most fertilizer-related mishaps. Turn the pages to this entry — or quicker, click on the cross-reference in the digital version — and history is revealed. Readers learn that this compound is used not only as a fertilizer but, when appropriately formulated, has legitimate applications in the civil explosive market. Pure, it is far too insensitive to meet the legal definition of an explosive.

In the carefree days before terrorism – well, really there never were such – so let us say in the 1960s, a cynical rule of thumb among amateur explosive makers was the Half-a-Bucket Law, which held that your brew would not explode under any circumstances until you had accumulated a half bucket, whereupon it would explode spontaneously.

There is an element of truth here, but it is exceedingly difficult to persuade a bucket of ammonium nitrate to explode. Pile up a thousand tons, however, and it might explode spontaneously. We know that the West Fertilizer Co. explosion was induced by a fire, but it would not be surprising if further restrictions on stockpiles are made (perhaps to 100 tons or less).

A reference work like Bretherick's could also inform journalists on ammonia, explaining that it is considered non-flammable in the US but flammable in Europe, where the only recorded instance of liquid ammonia burning in the open air has been reported. The geographical difference is, of course, legal not real. 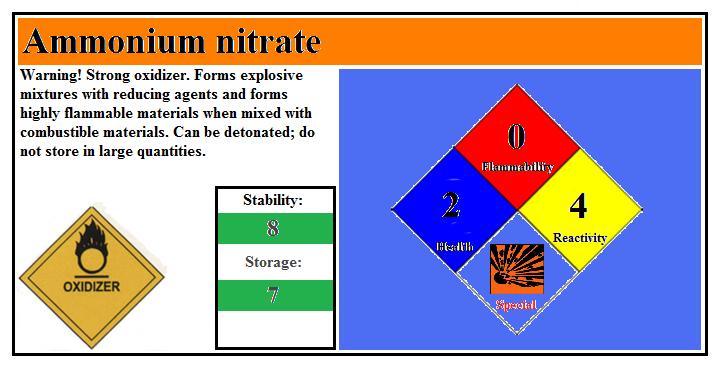 To view the material safety data sheet of Ammonium Nitrate, click on the image.

Ammonia itself is difficult to persuade to burn anywhere (fertilizer plants do indeed burn it, but use a catalyst to do so). However, ammonia/air explosions have been increasing recently, as industrial refrigeration reverts to ammonia in place of Freon gasses, the latter of which have been deemed ozone-depleting.

The problem is, refrigerators tend to be in enclosed premises, and enclosure allows substantial volumes of uniformly hazardous gas mixtures — in the event of a leak, far greater volumes than the combustible half-bucket which might form in the open, before low density and the breeze dispersed leaking ammonia below flammable limits. Moreover, marginal explosive mixtures always demand confinement to develop full power – which is why pressure cookers were also in the news at the time of West.

Of course, when news breaks, journalists must act quickly, and those who are not specialists in this field are unlikely to have this knowledge. That's why access to reference works like Bretherick's can make the difference in getting the story correct from the start.