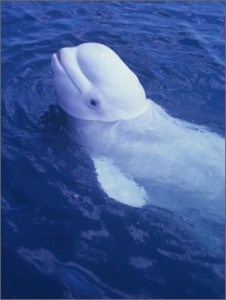 For people who remember those haunting — some would say spiritual — whale songs that made their way onto vinyl and later CDs some years ago, this week’s announcement of a talking whale is something completely different.

The researchers reported their findings on the whale named NOC in today's issue of Current Biology, a publication by Cell Press, which is an Elsevier imprint. The article is free on the Current Biology website.

If earlier whale songs conjure up the foggy whaling grounds of the North Atlantic, NOC’s utterances seem more at home on a sound track of Looney Tunes, the classic cartoons series. The chatty cetacean sounds like he’s performing a goofy rendition of "Stars and Stripes Forever" — one snorted loud enough to annoy anyone within earshot.

What makes the finding so startling, the researchers say, is that whales make sounds very different from the way humans do. We use our larynx; whales talk through their noses — well, blowholes.To make those human-like sounds, NOC had to vary the pressure in his nasal tract while making other muscular adjustments and inflating the vestibular sac in his blowhole, the researchers found."

Our observations suggest that the whale had to modify its vocal mechanics in order to make the speech-like sounds," said Dr. Sam Ridgway, president of the National Marine Mammal Foundation. "Such obvious effort suggests motivation for contact."Though the Current Biology report is new, Dr. Ridgway and others noticed unusual sounds near the whale and dolphin enclosure back in 1984. As described in the report, it sounded like two people conversing in the distance, too far away be comprehended. [divider] Have a Listen 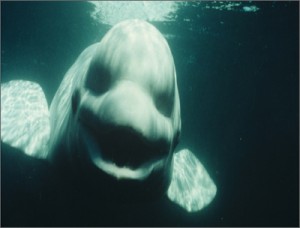 The next clue after a diver in the whale enclosure surfaced to ask his colleagues an odd question: "Who told me to get out?" Turned out to have been NOC, the researchers wrote. The whale had lived among dolphins and other white whales and had often been in the presence of humans.

There have anecdotal reports of whales sounding like humans before, including keepers at the Vancouver Aquarium in Canada who said a white whale there uttered his name “Lagosi,” the researchers wrote. Dr. Ridgway's team wanted to capture some real evidence. They recorded the whale's sounds to reveal a rhythm similar to human speech and fundamental frequencies several octaves lower than typical whale sounds, much closer to that of the human voice."

Whale voice prints were similar to human voice and unlike the whale's usual sounds," Dr. Ridgway said. "The sounds we heard were clearly an example of vocal learning by the white whale."Though NOC's story was presented at a marine mammal conference in 1985, it was never published until now due to demands from funded research, according to Ridgway."

Because the spontaneous mimicry was an incidental finding, it fell by the wayside," Ridgway wrote in an e-mail. "Recently I have retired and now work only part time with more time to write."

Len Maniace is an Executive Editor for Global Internal Communications at Elsevier in New York.
Lisa Lyons is Associate Marketing Manager for Cell Press, based in Cambridge, Massachusetts.