Research in the American Journal of Preventive Medicine looks at sedentary behavior, eating habits — and the ethics of using cameras for research 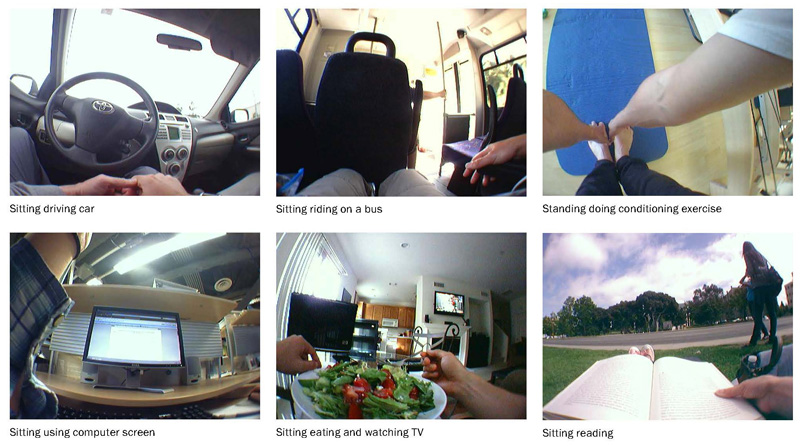 SenseCam images. Here are some of the images that were recorded from subjects wearing SenseCams.

Researchers can better understand the relationships between behavior and health outcomes when their subjects wear cameras, concludes a collection of studies in a special themed issue of the American Journal of Preventive Medicine. Three studies report on the latest preventive medicine research using Microsoft’s wearable camera, the SenseCam.

“Wearable cameras and their associated software analysis tools have developed to the point that they now appear well suited to measure sedentary behavior, active travel, and nutrition-related behaviors,”said Dr. Aiden Doherty of the Department of Public Health at the University of Oxford, one of the authors. “Individuals may recall events more accurately after reviewing images from their wearable cameras, and in addition, aspects of their immediate cognitive functioning may also improve.” 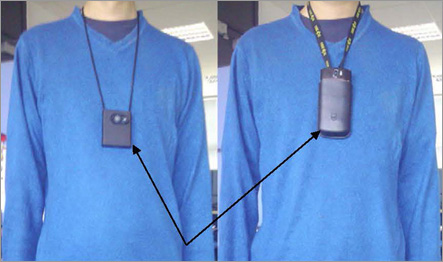 A paper titled “Using the SenseCam to Improve Classifications of Sedentary Behavior in Free-Living Settings” shows, for example, the advantages of wearable cameras over accelerometers (devices that measure physical acceleration) in providing both type and context information about sedentary behavior. Dr. Jacqueline Kerr of the Department of Family and Preventive Medicine at the University of California San Diego and colleagues found that while TV viewing, other screen use, and administrative activities were correctly classified by accelerometers, the standing postures are often misclassified as sedentary behavior. Additionally, a nearly 30-minute per day difference was found in sedentary behavior estimates based on the accelerometer versus the SenseCam.

Wait, what about those leftovers ...?

A study by researchers in Ireland analyzes how wearable cameras were employed to improve the recording of dietary intake among jockeys, Gaelic footballers, and physically active college students. The researchers, led by  Gillian O’Loughlin of Dublin City University, report that images from the SenseCam provide additional information regarding dietary intake patterns, such as portion size, forgotten foods, leftovers and brand names. Using wearable cameras also revealed a significant under-reporting of calorie intake, which is a prevalent and critical error of food diaries and self-reporting. Adding wearable cameras to dietary analysis provides a valuable tool not only for athletes and sport populations who closely monitor calorie intake, but may also present dieticians and health providers with the ability to better assess and treat those in need of dietary management.

In a study titled “Benefits of SenseCam Review on Neuropsychological Test Performance,” Ana R. Silva and colleagues at the University of Coimbra in Portugal highlight how wearable cameras can act as a cognitive stimulant in the short term. Compared to re-reading diary entries, using the SenseCam was found to improve autobiographic memory by prompting events reflected in the images, underlining the possibilities for using SenseCam in memory rehabilitation. While future research is still needed, the researchers propose wearable cameras have the potential to reduce the resources required in treating neurodegenerative diseases, such as Alzheimer’s.

Another study, “The Smartphone as a Platform for Wearable Cameras in Health Research,” recognizes obstacles in the widespread adoption of Microsoft’s SenseCam wearable camera, and thus presents smartphones as a viable, and in some cases, enhanced alternative.

An article by Paul Kelly of the British Heart Foundation Health Promotion Research Group and colleagues identifies and addresses the ethical implications of using wearable cameras in research. Because wearable cameras by nature can be intrusive, they propose a framework for future ethical practice. [note color="#f1f9fc" position="center" width=800 margin=10]

The American Journal of Preventive Medicine,published by Elsevier, is the official journal of The American College of Preventive Medicine and the Association for Prevention Teaching and Research. It publishes articles in the areas of prevention research, teaching, practice and policy. Original research is published on interventions aimed at the prevention of chronic and acute disease and the promotion of individual and community health. The journal features papers that address the primary and secondary prevention of important clinical, behavioral and public health issues such as injury and violence, infectious disease, women's health, smoking, sedentary behaviors and physical activity, nutrition, diabetes, obesity, and alcohol and drug abuse. Papers also address educational initiatives aimed at improving the ability of health professionals to provide effective clinical prevention and public health services. The journal also publishes official policy statements from the two co-sponsoring organizations, health services research pertinent to prevention and public health, review articles, media reviews, and editorials.

With an Impact Factor of 4.044, the journal is ranked 12th out of 157 Public, Environmental and Occupational Health titles and 17th out of 153 General & Internal Medicine titles, according to the 2011 Journal Citation Reports published by Thomson Reuters. [/note] [divider]