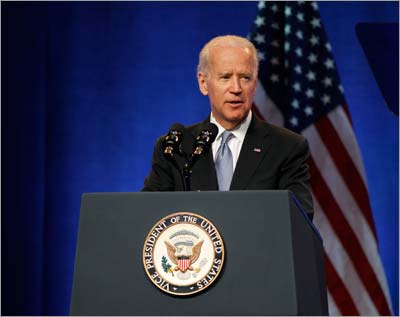 Vice President Joe Biden can be funny. He can be controversial. But when he addressed the 15,000 members at the American Psychiatric Association's 167th Annual Meeting at the Javits Center in New York City on Monday, he was eloquent.

Recalling a visit he received from a college roommate whose son was diagnosed with bipolar disease, Biden told the audience:

My friend came to me and said, 'Joe, I don't know what to do. I feel like my boy is at the end of a string, and if I pull too hard it will break. And I will lose him forever.' I found the metaphor incredibly compelling. There are too many people who know that feeling — they don't know what to do, but they know if they pull too hard, that string may break and they will lose their blood.

Biden was introduced by APA President Dr. Jeffrey Lieberman, chair of the Department of Psychiatry at Columbia University College of Physicians and Surgeons.

A message from Patrick Kennedy

Former US Congressman Patrick Kennedy, son of the late Senator Ted Kennedy, accompanied Biden onstage and spoke of his father's commitment to mental health that resulted in the Mental Health Parity and Addiction Equity Act in 2008. Patrick Kennedy, who served in Congress for 16 years, has made no secret of his struggles with drug addiction, alcoholism and mental illness. He has devoted his life to easing the stigma of mental illness. "My father had no greater ally than Joe Biden in the fight to establish parity for mental illness," Kennedy said.

Biden said he was both humbled and scared to be speaking to the 15,000 psychiatrists who were watching him in person or via live feed. "The prospect of being psychoanalyzed by thousands of psychiatrists is intimidating," he said. "Even the insurance companies are quiet right now."

Biden is no stranger to tragedy. When he was elected to the Senate at age 29, his wife, Neilia, and their 1-year old daughter, Naomi, were killed and their two young sons critically injured in an auto accident.

[pullquote align="right"]"When I had my brain surgeries, my neurosurgeon said, 'I am amazed neurosurgeons are so respected because we know so little about the brain.' I knew he was joking, but I did not find it very comforting."[/pullquote]

Biden had two brain surgeries in 1988 for cranial aneurysms. "When I had my brain surgeries, my neurosurgeon said, 'I am amazed neurosurgeons are so respected because we know so little about the brain.' I knew he was joking, but I did not find it very comforting."

Biden was told his chance of living was 35 to 50 percent and he might never be normal again.  "No comment," he quipped.

Biden became emotional when he spoke about the 30,000 soldiers, both women and men, who have returned from Afghanistan and Iraq with traumatic brain injury or post-traumatic stress disorder. "These invisible diseases are just as serious as the wounds of battle – and often harder to treat," he said. "I have often talked about the duty of government. But our government has only one truly sacred obligation. It is to prepare those and equip them who we send into harm's way, and care for them when they come home."

He noted that the Veterans Administration has added more than 2,400 mental health professionals in recent years.

'We need more of you than exist today'

Just as too many soldiers suffer from mental illness, Biden said, we must help our children who have been abused,  gay men and women who have been bullied, and women on college campuses who have been sexually assaulted and are afraid to speak who live in shame through no fault on their own." Looking around the room he said, "We need you more than ever, quite frankly, we need more of you than exist today."

Biden praised President Obama and said the Affordable Care Act ensures that mental health and substance abuse services are covered comparably to how surgical and medical services are covered. He also said that since the majority of mental illnesses manifest themselves before age 24, the fact that children can stay on their parents' plans until the age of 26 will help them get the treatment they need. Biden also mentioned that the Obama administration pledged last year to devote $100 million to increasing access to mental health services.

Progress in understanding the brain

The vice president said he was encouraged by the progress in the understanding of the brain since his own brain surgeries:

I know that we are poised to create the tools to find new ways to treat, cure, and even prevent conditions affecting the brain. And we are on the cusp of identifying the biomarkers for mental illness, designing early prevention treatments for psychosis and revolutionizing the understanding of the brain circuitry and function.

Imagine the possibilities for millions of young people right at the age when they want to explore the world if we have these tools of early detection to prevent mental illness from taking over their lives. Just as we couldn't imagine how the moon landing would yield technologies for semiconductors and the iPhone, I don't think we can begin to imagine the breakthroughs that will occur tomorrow as a consequence of the President's BRAIN Initiative.

Biden closed by saying, "I often thinks of the parents, siblings, and husbands and wives who go to bed each and stare at the ceiling and wonder what to do. I am counting on you, the psychiatric community, to ensure that the string that holds their loved ones together does not get broken."

Commenting on Biden's talk, Dr. Lieberman said, "The vice president is an ardent advocate for improved mental health services, the elimination of stigma, and increased research on mental illness." He said the administration's pledge last year to devote $100 million to increasing access to mental health services, convening the White House National Conference on Mental Health in 2013 and the BRAIN Initiative "have demonstrated the president and vice president's commitment to addressing this critical public health need.

"Vice President Biden has shown great insight and compassion for the plight of individuals with mental illness and appreciation for the ability of health care services to reduce the suffering of the people so afflicted and the burden of illness to our country."

David Levine (@Dlloydlevine) is co-chairman of Science Writers in New York (SWINY) and a member the National Association of Science Writers (NASW). He served as director of media relations at the American Cancer Society and as senior director of communications at the NYC Health and Hospitals Corp. He has written for Scientific American. the Los Angeles Times, More magazine, and Good Housekeeping ,  and was a contributing editor at Physician's Weekly for 10 years. He has a BA and MA from The Johns Hopkins University.