Last night, Jay Leno mentioned a highly publicized study in The American Journal of Medicine in his opening monologue on The Tonight Show.

The study, titled “The Impact of Marijuana Use on Glucose, Insulin, and Insulin Resistance among US Adults,” concluded that marijuana use is associated with "lower levels of fasting insulin ... and smaller waist circumference." It was authored by Murray Mittleman, MD, PhD, Associate Professor of Epidemiology in the Harvard Department of Public Health, and his graduate students Elizabeth Penner and Hannah Buettner.

The monologue, 25 seconds into the video above, goes as follows, with Leno misstating the title of the journal:

"Well, according to the Journal of American Medicine [sic], there's a strong correlation between marijuana use and smaller waistlines. People who smoke marijuana may also be thinner. So apparently, the cure for chronic overeating is more chronic ..."

The term "chronic" in his punch line refers to a high-quality version of weed. 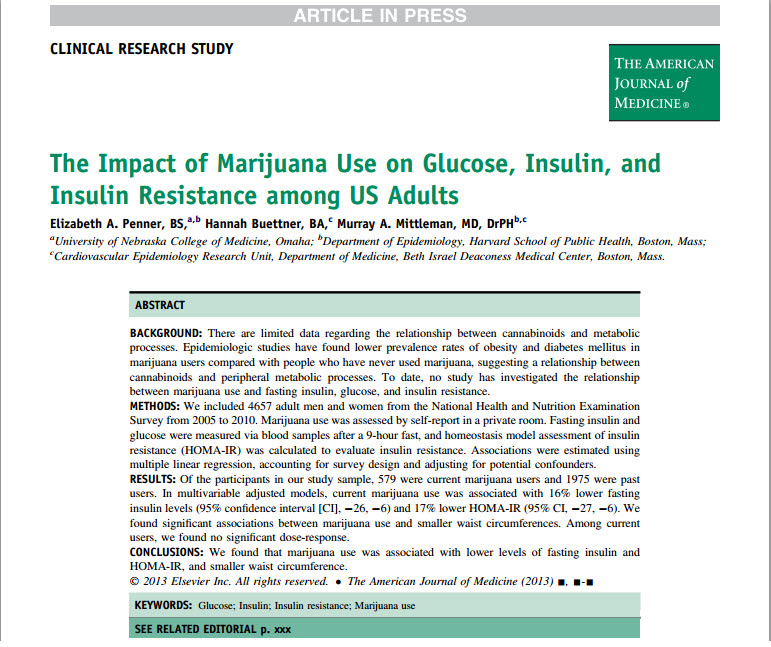 Research — not regulations — should guide medical marijuana use

Dr. Joseph Alpert, Editor-in-Chief ofThe American Journal of Medicine,wrote this editorial to accompany the article about marijuana use and diabetes.