We started Mendeley to solve our own problems ...

Co-founders Jan Reichelt, Paul Föckler and I started Mendeley to solve our own problems. Back in 2007, we were PhD students with hundreds of academic papers stored on our computers and no good way to make sense of them. Existing reference management tools seemed too cumbersome, clunky, and expensive — they cost hundreds of Euros, required a lot of manual data entry, and wouldn’t even store the metadata and the PDFs together![caption id="attachment_26081" align="alignright" width="384"] 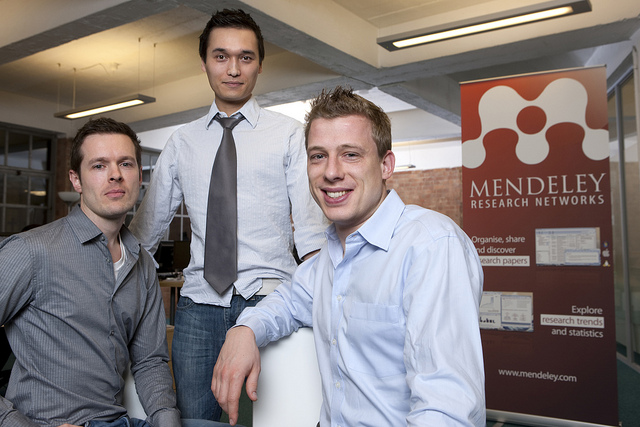 So we wondered: Why wasn’t there a tool that could extract the relevant metadata — authors, title, year, journal, volume, issue etc. — automatically from PDFs, and help us manage the files? A tool that would also let us read and annotate PDFs, cite papers in Word, OpenOffice, or LaTeX, and allow us to set up collaborative groups for sharing and discussing research? In short, a tool for helping us with our entire workflow from content discovery, to document management, to authoring and collaboration?

After realizing that such a tool did indeed not exist, we began to create it ourselves.Fast forward to 2013: Mendeley is now a global academic community. Collectively, our users have uploaded more than 400 million citations and documents into their Mendeley accounts. Our users’ aggregated, anonymized metadata — available via the Mendeley API (application programming interface) — powers more than 300 new third-party research apps, e.g., document management on Android and Kindle, altmetrics apps like ImpactStory.org and Altmetric.com, and citation plugins for web and learning platforms like WordPress, Drupal and Moodle.[divider]

A few of your questions answered ...

Over the years, Henning's speaking engagements at publishing conferences have offered ample opportunity to chat with researchers and journal editors. In this Q&A with Linda Willems (@Willems_Linda), Senior Researcher Communications Manager for Elsevier, he answers some of the most common questions he has been asked:

Q. Is Mendeley a peer-to-peer file sharing tool? Can academics just search and freely download any article they want?

A: No, it isn’t. Mendeley keeps each user’s library private and accessible only by them. It is not possible to search for an article on Mendeley, see if another user has it in their document library, and download it from there. Instead, when Mendeley users search for or discover an article on Mendeley, we only show them the metadata - then link to the original publisher via DOI, or to the user’s institutional library via OpenURL.As such, Mendeley is a major driver of traffic and article usage to publishers. Over the past few years, Mendeley had struck agreements with several major publishers and societies, e.g. Springer, IEEE, De Gruyter, and others, about providing us with metadata and document feeds to augment, clean, and complete our database, as cleaner and more complete data meant more traffic, usage, and altmetrics impact for publishers. Now, with Elsevier’s support, we hope to grow our collaboration with other publishers to a much larger scale.

Q. How does Mendeley treat self-archiving of articles and sharing for collaboration?

A. There are only two ways in which articles can be shared on Mendeley: Via self-archiving articles on an author’s Mendeley profile, or via Mendeley’s 'Private Groups' functionality.Each Mendeley user has their own profile page — mine is www.mendeley.com/profiles/victor-henning. Users can upload their own papers to their profile to ‘self-archive’ them and make them available for download on the web. It is entirely up to the user whether to opt into this functionality, and whether to upload only a metadata reference, a pre-print or post-print PDF, or a PDF of the final published version. We require our users to adhere to the copyright of their publisher when doing so, and the Mendeley user interface will incorporate explicit referrals to the SHERPA-RoMEO policies of the publisher in the near future.The other way of sharing articles on Mendeley is via ‘Private Groups’. These are a collaboration space - much like Basecamp, SharePoint, or Google Docs — in which members of a team can keep track of references for a research project, collaboratively annotate documents, and discuss open questions. Private Groups are invisible from the outside, and are accessible by invitation-only.

Free users of Mendeley are restricted to one Private Group, with a limit of three members including themselves; paid users of Mendeley can create groups of five up to 50 people, which are popular in labs and departments.Naturally, Elsevier reviewed our self-archiving and collaboration practices before deciding to acquire Mendeley — and concluded that we were providing a valuable workflow service to academics without undermining publishing business models and journal viability.

Q. Is Mendeley pro-open access, or an open access-only tool?

A. First and foremost, Mendeley is a workflow tool that wants to make researchers’ lives easier, no matter whether they are working with OA or non-OA content.When a researcher discovers OA content on Mendeley, we are able to offer them a direct download into their Mendeley library, whereas we have to send them to other publishers’ or library websites if they want to access non-OA content and we don’t yet have an agreement with the publisher. Reaching such agreements is one potential benefit of working more closely with the rest of Elsevier.  Many members of the Mendeley staff and community team are personal believers in the OA movement and see it as the way forward for publishing because if all content were OA, then all content would flow without friction around the web and into/through researcher workflows.[divider] This article is part of a feature than ran in Editor's Update called "Mendeley and Elsevier — What does the future hold?"[divider][note color="#f1f9fc" position="alignnone" width=800 margin=10]

Max Planck famously said: “Science progresses funeral by funeral.” Victor thinks there must be gentler methods.Dr. Victor Henning (@Mendeley_com) is Co-founder of Mendeley & VP of Strategy for Elsevier Science & Technology. He holds a PhD from the Bauhaus-University of Weimar, where he researched the role of emotion in consumer decision making. His research was published in Psychology & Marketing, the Journal of Marketing, and in Media, Culture & Society. In his first year as a PhD student, he also won the Overall Best Conference Paper Award at the largest academic conference in the field of marketing, the AMA’s 2005 Summer Conference in San Francisco – and was told by the conference chair that his academic career could only go downhill from there. Nonetheless, the Foundation of the German Economy kindly decided to grant him a doctoral dissertation scholarship in 2006, and the Royal Society of Arts elected him a Fellow in 2011.[caption id="attachment_21800" align="alignleft" width="450"] 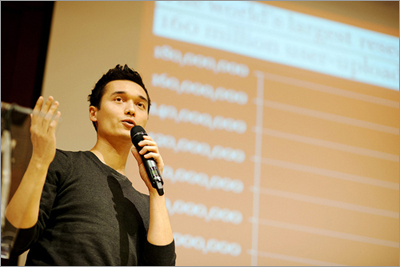 At the Bauhaus-University, Victor was also frequently cast in student short films, despite a visible lack of acting talent. He compensated by organizing the “Guru*Talk” lecture series with German film industry luminaries, which was later turned into a book on the future of the film industry, and consulted for film production companies.

Prior to having had all this fun, he completed an MBA at the WHU Koblenz, the Université Libre de Bruxelles and the Handelshøyskolen BI Oslo.Victor has also worked as a Talent Scout A&R for Sony Music/Columbia Records in Berlin, and in various roles at punk/garage label Revelation Records in Huntington Beach, California. Realizing that one couldn’t make a living with the music he loved, he moved on to Munich-based film producer/distributor Helkon Media, which promptly went bankrupt (not Victor’s fault).

Later, in parallel to writing his MBA thesis, he also co-founded the Korova Bar in Vallendar which, if nothing else, taught him how to use dangerous power tools. [/note]