This spring, science writer David Levine was among nine journalists invited to meet with Israeli researchers in a trip sponsored by American Associates, Ben-Gurion University of the Negev. Here, he writes about the work of Dr. Itai Weissberg of the university's Zlotowski Center for Neuroscience. Dr. Weissberg works in the lab of Dr. Alon Friedman, MD, PhD, whose research focuses on the pathophysiology of brain disorders and the effects of stress on the nervous system. Dr. Friendman was on academic leave and was not present at this session. A new brain imaging technique developed by researchers at Ben-Gurion University of the Negev(BGU) enables doctors to visualize and identify damage to the blood-brain barrier (BBB) of professional football players following unreported trauma or mild concussions.

The new technique, which uses dynamic contrast-enhanced MRI (DCE-MRI) imaging, allows for direct mapping of BBB lesions and quantitative assessment of overall BBB dysfunction after a concussion. The findings can help physicians decide when or if it is safe for an athlete to resume playing sports.

In a presentation for journalists, Dr. Weissberg began with a slide showing headlines from Time magazine and The New York Times:

"There has been extensive media coverage about the long-term neuropsychiatric consequences of repeated mild traumatic brain injury and specifically sports-related concussive and sub-concussive head impacts to football players," he said. "Until now, we lacked the diagnostic capability to identify mild brain injury early after the trauma."

He also addressed another issue on the minds of some of the journalists. Why are Israeli researchers interested in American football? "Football is not a big sport in Israel, but we have a team in Beersheba known as the Black Swarm,” he said. It’s part of the Israel Football League which is sponsored by New England Patriots owner Robert Kraft.

Their study group consisted of 16 football players from the Black Swarm and 13 track and field athletes from Ben-Gurion University who served as controls. DCE-MRI imaging was given to the players between games during the season and revealed significant damage; 40 percent of the examined football players with unreported concussions had evidence of BBB damage compared to 8.3 percent of the controls.

Researchers reported that the group of 29 volunteers was clearly differentiated into an intact-BBB group and a pathological-BBB group. "There was a clear association between football and increased risk for BBB pathology that we couldn’t see before,” Dr. Weissberg said. “In addition, high-BBB permeability was found in six players and in only one athlete from the control group.” The study was published in JAMA Neurology in November 2014.

Dr. Weissberg noted that not all of the players showed pathology:

This indicates that repeated, mild concussive events might impact some players differently than others. This level of diagnosis of individual players can provide the basis of more rational decision making on ‘return to play’ for professionals as well amateurs of any age.

A promising drug to prevent epilepsy from severe head trauma

Dr. Weissberg also discussed a related study that determined that the blood-pressure drug losartan (Cozaar) may prevent cases of epilepsy that result from severe head trauma. The researchers found that losartan prevented a majority of cases of post-traumatic epilepsy in a rodent model of the disease.

In the study, administration of losartan for three weeks at the time of injury was enough to prevent most cases of epilepsy in normal lab rats in the following months. The drug prevented seizures in 60 percent of the rats tested, when typically all develop seizures after this model of injury. In the 40 percent of rats that did develop seizures, they averaged about one quarter the number typical for untreated rats.  The study results were published in the Annals of Neurology in June 2014.

"This study offers the first explanation for how brain injury caused by a blow to the head, stroke or infection leads to epilepsy,” Dr. Weissberg explained. “Specifically, following a trauma, there is a breach in the blood-brain barrier, which is the tight wall of cells lining blood vessels in the brain." 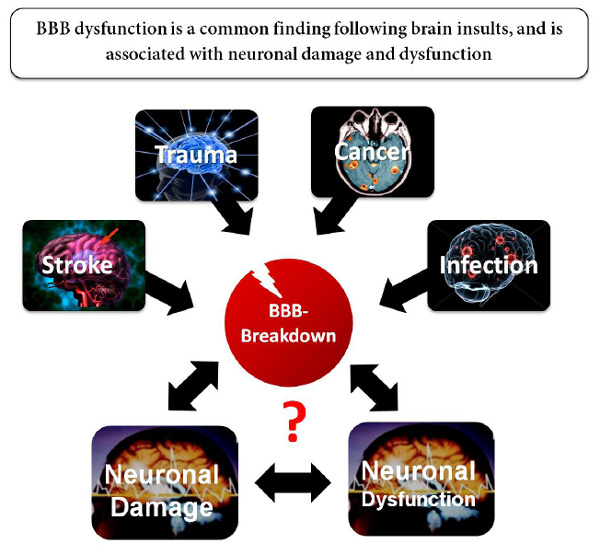 Dr. Weissberg noted that currently clinicians have no clinically applicable strategy to prevent the development of epilepsy in patients at risk:

Today, if someone comes to the emergency room with traumatic brain injury, they have a 10 to 50 percent chance of developing epilepsy, and epilepsy from brain injuries tends to be unresponsive to drugs in many patients. In addition, since breakdown of the blood-brain barrier may also be associated with other complications, including bleeding and changes in cognitive functions, we are expecting that our approach will prevent complications other than epilepsy.

As losartan is an approved drug and easy to administer, why isn't it given to all patients who come into the emergency room after a concussion or suspected brain injury?

"The drug is not without risks," Dr. Weissberg said. For example, he said that in treating 650 patients following brain injury, they can only prevent epilepsy in 10 patients, while 6 to 18 patients will suffer side effects. "Until more is known about which patients will benefit,” he said, “I am not ready to advocate the universal use of losartan at this time." 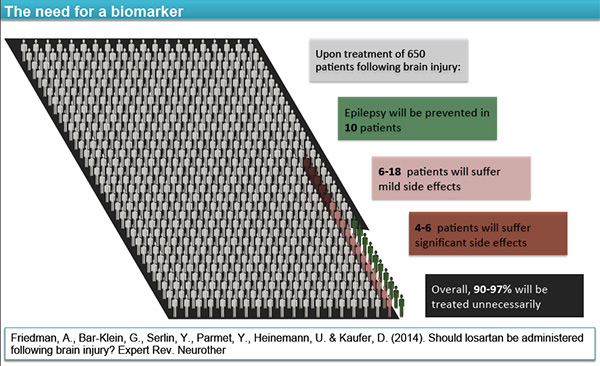 David Levine (@Dlloydlevine) is  co-chairman of Science Writers in New York (SWINY) and a member the National Association of Science Writers (NASW). He served as director of media relations at the American Cancer Society and as senior director of communications  at the NYC Health and Hospitals Corp. He has written for Scientific American, the Los Angeles Times, The New York Times, More magazine, and Good Housekeeping, and was a contributing editor at Physician's Weekly for 10 years. He has a BA and MA from The Johns Hopkins University. >