Nearly half of India’s people do not use a toilet; organizations here are taking a lively approach to get young people to speak out 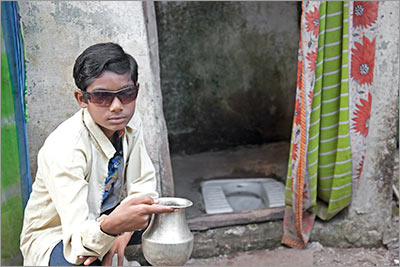 Beyond toilet humour, many people find talking about poo difficult, and this is especially so in India where issues of caste, religion and generational norms prevail. Therefore the problem of open defecation — amounting to mountains of poo — is too difficult for swathes of India's population to even acknowledge. Meanwhile the statistics are shocking. Just under half of India's total population — 595 million people — do not use a toilet.

Beyond the obvious contamination and risks caused by having so much untreated human waste in the environment, open defecation has catastrophic implications for young children. Approximately 26 million children are born every year in India, and there are 158 million children under 5 years of age. Though progress has been made in bringing down the under-5 mortality rate (U5MR is defined as the number of children under 5 who die in a year per 1,000 live births), which has declined from 115 in 1990 to 59 in 2010), India still accounts for the largest number of under 5 deaths globally, many of which are caused by diarrhoea.

India also has 61 million stunted children, an outcome of chronic under nutrition caused by poor dietary intake, frequent attacks of infectious diseases such as diarrhoea, and inadequate child care practices. Recent evidence suggests that chronic infection of the gut — or environmental enteropathy — plays a significant role in stunting as it reduces the intestine's efficacy in digestion and absorption of food thereby causing chronic under nutrition. A major cause of environmental enteropathy is inadequate household sanitation and hygiene. Quite simply, for more children to thrive, open defecation must stop.

To this end UNICEF helps to shape advocacy arguments to position this issue on behalf of children, especially those most severely and consistently excluded. While social change demands collective actions by those closest to the problem (for example, groups of households learn about the benefits of toilet use before collectively agreeing to stop open defecation in their village), it also requires the voice and support of the wider population. However, the presence of human faeces in the open, including on the streets of New Delhi, is simply no cause for civic outrage. So who beyond civil society and think tank institutions is agitating for the monumental social change required for everyone in India to use a toilet?

Globally the middle classes and young people are expanding their voice to make a stink about social causes. However in India, commentators point out that while the middle class (almost 53 million households) is economically dynamic, it is largely uninterested in politics or social reform. India also has around 250 million 10-19 year olds, yet adolescents are largely excluded from decisions that affect them, have limited access to information on issues affecting their lives, and have limited spaces and opportunities to acquire and share knowledge and to participate actively in decision-making processes. So in India, the middle class is somewhat silent, and adolescents are largely invisible as citizens.

To help fill the communication void, organisations like Youth Ki-Awaaz are now taking root. As the country's largest online community media platform for young people to express themselves, this and other like-minded organisations recognise that India's youth is indeed ready to speak if given the right channel.

This is why in late 2013, UNICEF India launched a new type of youth engagement campaign. "Take Poo to the Loo" (@poo2loo) is a digitally led, fun and interactive campaign that seeks to persuade adolescents to raise their voice to influence public opinion in support of an end to open defecation. Targeted at those with access to social media, the campaign gave young people the power to put poo in its right place – the toilet. By harnessing the power of socially networked communities, friends talked to and listened to trusted friends. Open defecation became an issue for a new audience to show concern about.

Poo2loo has made a stink in India and across the world, and within weeks of its launch had over 1 million viewings of the campaign online videos; and over 147 million Facebook impressions. While the campaign approach has been applauded and occasionally maligned, India started talking about poo as never before. The campaign provoked a response around how socially and culturally sensitive issues can become the focus of powerful public advocacy. As India settles in to a new government, Prime Minister Modi has launched a new and welcome sanitation campaign: "Swachh Bharat" (Clean India).

The time has come to shake up the caste culture that silences the issue of open defecation as being "nothing to do with me." It's time to make a stink to end open defecation.

Making of the Poo Song

The composer of the Poo2Loo theme song shows how he composed it using toilet sounds. While the videos have received mixed reviews on UNICEF India's Poo2Loo YouTube channel, they have more than a million views and have got people in India talking about public sanitation like never before.