Turkey's scientific research output is booming – but what about the quality? 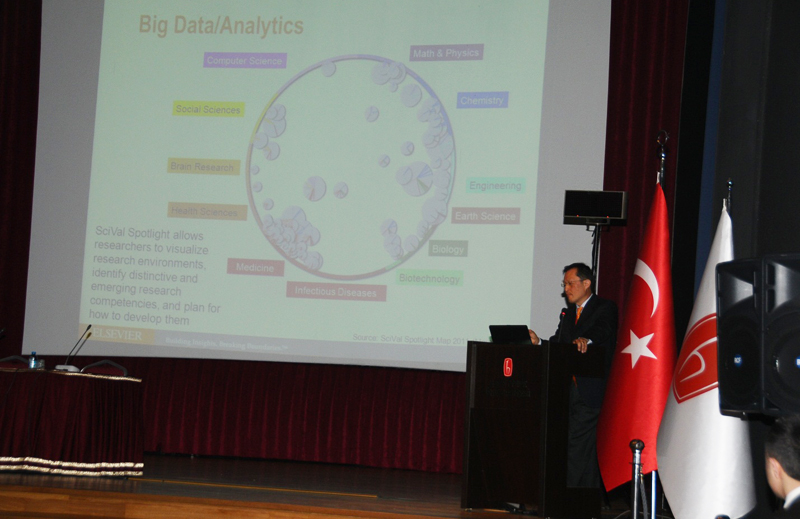 Over the last decade, Turkey's GDP (gross domestic product) has grown significantly, prompting the government to increase its R&D spending. Turkey increased its research and development expenditure from 0.54 percent of GDP in 2001 to 0.86 percent in 2011, according to the Turkish Statistical Institute (TUIK).

As part of long-term plans, the government has set a goal to increase the share of R&D investments to 3 percent of GDP by 2023, the centennial of the founding of the Republic of Turkey.

But, what about the quality of this research?

To answer this question, Elsevier organized a research performance and evaluation event March 12 in collaboration with Hacettepe University in Ankara, Turkey. The theme of was "Turkey and Turkish University's Research Outputs in the Context of International Trends in Science and Collaboration Opportunities."

Elsevier Chairman Youngsuk "YS" Chi began his presentation with a quotation that reflects Turkey's motivation for investing in scientific research:

Science is not a luxury which is the preserve of developed countries ... Technology and innovation are key to achieving long-term economic and social development.

The quotation is from The Royal Society report Knowledge, Networks and Nations, which surveys the global scientific landscape in 2011.

Addressing the audience at the opening session, Chi said: "Three decades of economics studies have conclusively demonstrated that investments in both basic and applied research pay off with very large net positive economic impacts, though lags can be from 20 to 30 years in basic science in particular."

The event was held for the first time in Turkey, with the participation of representatives from government, research institutes, universities and university libraries as well as researchers and public policy experts. Its main goal is to enable delegates to present and discuss Turkey's research performance.

At the same time, the event provides a forum for in-depth conversation on research evaluation, innovation and policy management, and an opportunity to share best practices on how to capture and analyze information scientific research output and use it to develop research strategy. 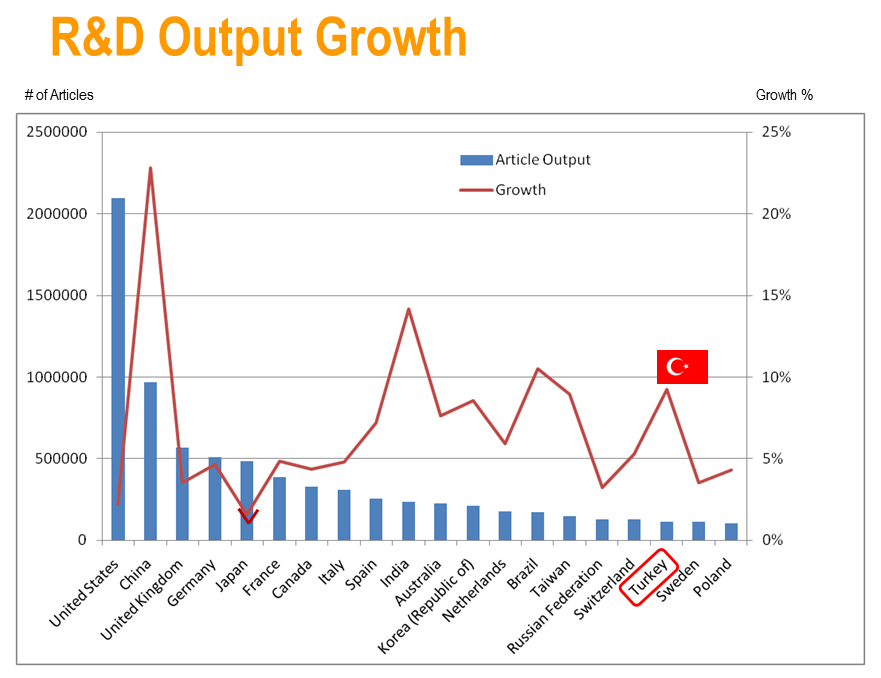 There is not only global growth in the quantity of Turkey's research output but also in the quality. This graph shows the percentage of total papers that have been cited, in 4-year increments since 1996. All the countries on this graph have had growth in the proportion of papers that have been cited over the entire 15-year period. Nearly half (49.9 percent) of Turkish papers were cited between 2006 and 2010. 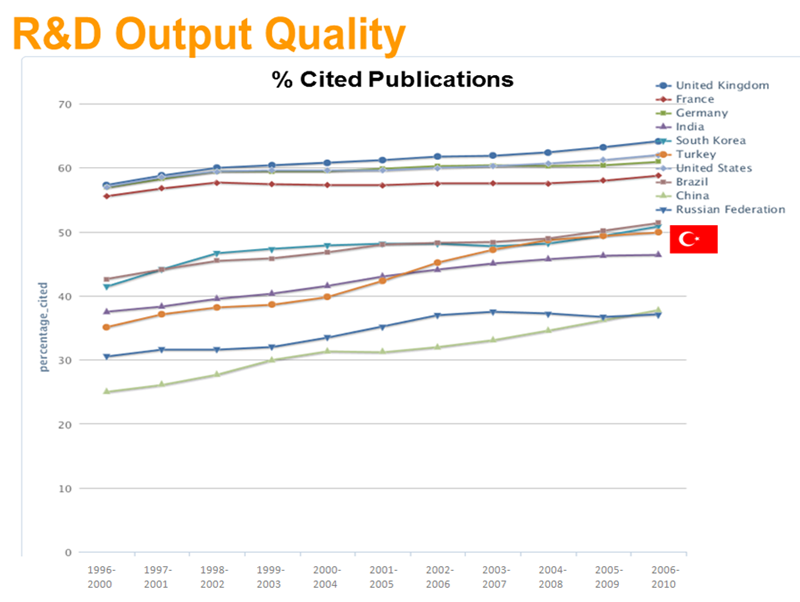 In this way, Turkey surpasses two of the world's most rapidly growing economies: India, which had 46.4 percent growth, and China, which had 37.7 percent. Despite its smaller GERD (gross domestic expenditure on R&D), Turkey is producing proportionately more "quality" papers.

Going deeper into the analysis of Turkey's research output, findings show that Turkey is good at chemistry, engineering and medicine. Research in Turkey has also become increasing interdisciplinary, as shown by a 2011 study conducted by Elsevier. This trend can be seen on the SciVal Spotlight country map for Turkey, which shows scientific production from 2007 to 2011. The bubbles represent research competencies, while their position and the different colors of the lines within them show the disciplinary mix involved. 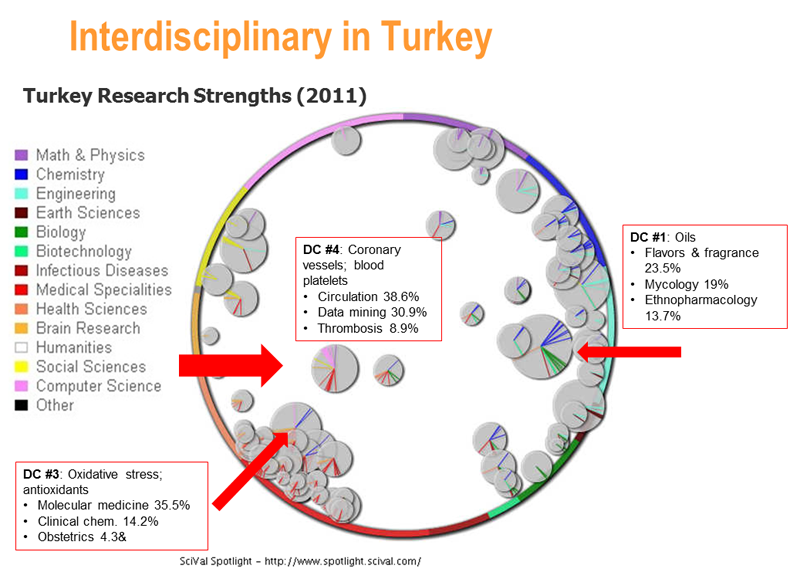 Scientific production from 2007 to 2011. In this SciVal Spotlight country map for Turkey, the bubbles represent research competencies, while their position and the different colors of the lines within them show the disciplinary mix involved.

In their 2013 report "Evaluating a department's research: Testing the Leiden methodology in business and management" in the journal Information Processing and Management," Dr. John Mingers and Dr. Evangelia AECG Lipitakis of Kent Business School at the University of Kent state:

In recent years excellent scientific research, as the main driving force of our modern society, has been proved to be the source of breakthroughs in the diffusion of our knowledge of the world. The evaluation of such scientific research is considered to be of paramount importance. One of the main factors in the assessment of research performance is the international scientific influence, representing a measurable aspect of scientific quality. 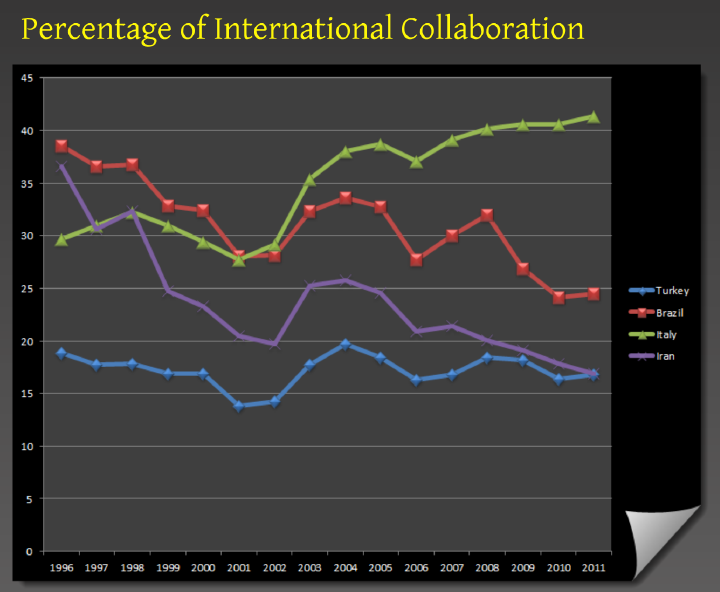 Hellwig, who led this research as SciVal Consultant, explained his conclusions:

Tayfun Basal, Regional Director for Turkey, Iran, Middle East and Central Asia Countries at Elsevier, manages a team of six people to coordinate the marketing and sales activities of more than 1000 universities and research centers. He has been working for Elsevier since 2006 in various roles. He Lives in Ankara and holds a MBA from Gazi University in Ankara and an MS in mechanical engineering from Middle East Technical University in Ankara.

Gamze Keskin , Customer Development Manager for Turkey, Iran, Middle East and Central Asia Countries at Elsevier, is responsible for regional marketing initiatives and usage development in the academic and government sectors. She has been working for Elsevier since 2011. She holds an MS in science education from Middle East Technical University in Ankara.