To stay a step ahead of breast cancer, make a map of the future 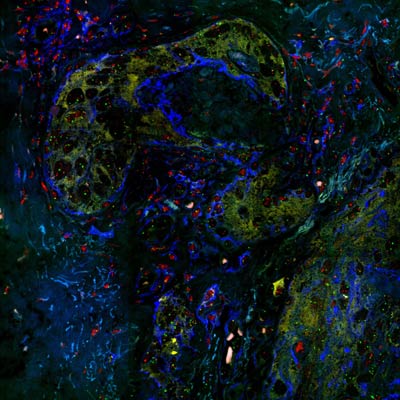 Cancer isn't a singular disease, even when talking about one tumor. A tumor consists of a varied mix of cells whose complicated arrangement changes all the time, especially and most vexingly as doctors and patients do their best to fight it.

Researchers reporting in the Cell Press journal Cell Reports have now developed a tool to help them predict which direction a tumor is most likely to go and how it might respond to chemotherapy.

"By analyzing tumors before and during treatment, we can build models that predict how the tumor will evolve," said Dr. Kornelia Polyak of Dana-Farber Cancer Institute and Harvard Medical School. "Better understanding of tumor evolution is key to improving the design of cancer therapies and for truly individualized cancer treatment."

Dr. Polyak, along with Dr. Franziska Michor and their colleagues, analyzed large numbers of individual cancer cells within breast tumors for important characteristics: chromosome copy number, the presence or absence of certain protein markers, and their proliferative capacity. Based on those data, they generated tumor topology maps and developed computational models to predict how each tumor would likely change during treatment.

The novelty of the approach, Dr. Polyak explained, is its inclusion of genetic and other characteristics of a large number of individual cells within intact tumor samples along with information about where those cells were located within the tumor. By integrating both types of information, they were able to anticipate how an individual tumor would likely respond to therapy.

Their studies also revealed some general rules: The genetic diversity within a given tumor doesn't change much in cancers that show partial or no response to treatment. Tumors with lower genetic diversity before treatment are also more likely to show a complete response than those with greater genetic complexity.

Most importantly, they show, it's possible to build computational models that predict how a tumor will change in response to specific treatment based on the analysis of single cells. The researchers envision a future in which doctors will perform detailed analysis of the tumor at the time of diagnosis, defining its cellular composition and the characteristics of individual cancer cells within it.

[pullquote align="right"]"Based on this knowledge, we could predict which tumor cells will likely be eliminated or slowed down by treatment and how this may change the tumor overall." — Kornelia Polyak, MD, PhD[/pullquote]

"Based on this knowledge, we could predict which tumor cells will likely be eliminated or slowed down by treatment and how this may change the tumor overall," Dr. Polyak said. "This knowledge could aid the design of subsequent therapies for those who do not respond to the first line of treatment."

The researchers now plan to develop automated image analysis methods to enable the expansion of their studies to more patients undergoing targeted therapies. They will also work on optimizing their predictive capacity and applying the new tool in future clinical trials.[divider]

Cell Press has made this study freely available on its website for two weeks, until January 30, 2014: