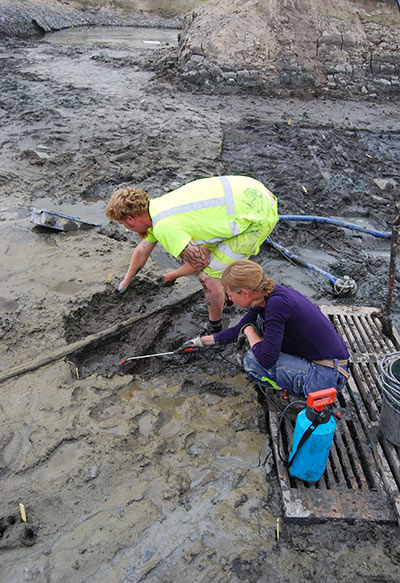 Imagine digging into the ground and uncovering 200,000 fish bones. That’s exactly what happened to Adam Boethius, historical osteology PhD candidate at Lund University in Sweden, and his colleagues.

In 2011, Boethius had been excavating a site at Norje Sunnansund in Sweden with 16 other archaeologists to rescue any artifacts from Early Mesolithic settlements before a road was built. As they started to dig, they found lots of fish bones, which indicated people had lived there. They then uncovered an elongated pit or gutter surrounded by small stake holes and completely filled with fish bones.

Boethius described the moment they found the pit:

Society needs to build roads and houses, and if these things need to be placed on an archaeological settlement, you have to do an excavation to see what there is. Because of all the fish bones in the area, we knew something was going on even before we found the feature. At first we had no idea what it was so we rescued it from the area to investigate – we basically dug it out and removed the content. The road is built now so everything has been destroyed.

The fishy find has more significance than any of them realized at first: it suggests people living in the area more than 9,000 years ago were more technologically and culturally advanced than previously thought. 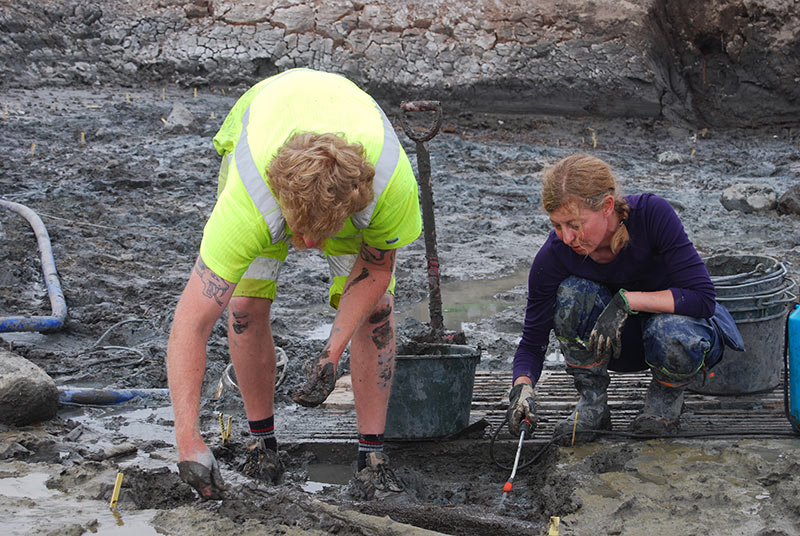 In the Early Mesolithic period, about 9,200 years ago, people living in Scandinavia caught fish from the sea, lakes and rivers and moved around following the sources of food they could find. But the new research, published in the Journal of Archaeological Science, turns this theory on its head, revealing that people who survived by foraging for food actually settled in a community much earlier than previously thought.

By analyzing the many fish bones and various aspects of the area in and around the pit, Boethius realized that the pit had been used for fermenting fish – a skillful way of preserving a large amount of food for people living in a sedentary community. Boethius estimates the people must have fished more than 60 tons of fish at the site, which could have supported a relatively large community.

The scale of the find was surprising because fish bones are small and fragile so usually don’t survive such long periods of time. Boethius explained:

Other excavations of settlements from the Early Mesolithic time period commonly yield a couple of hundred fish bones, and we found about 200,000! It’s a massive amount of fish – there’s nothing similar to this, so we weren’t prepared at all. Also, we excavated with fine mesh, which is the reason why we were able to find and retrieve the small fish bones.

Preserving and storing large amounts of food for a group of people is called a “delayed return subsistence strategy” and is a mark of a settled population. If the people were more sedentary, they would have been better able to develop culture. This, say the authors, makes the culture more comparable to the Neolithic people in the Middle East, who were traditionally thought to have settled much earlier than their northern European counterparts.

“This is a really exciting and surprising finding that gives us a completely new picture of how the group lived,” said Boethius. “We’d never seen a site like this with so many well preserved fish bones, so it was amazing to find.” 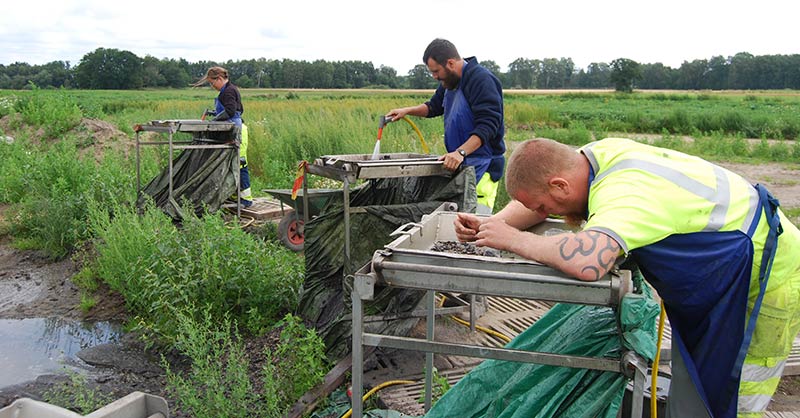 Boethius analyzed the feature and the contents and discovered the fish bones were from freshwater fish. Around 9,000 years ago, the Baltic area was very different to how it is today: it was freshwater, as it had not yet fully opened to saltwater from the sea.

Given the amount and type of fish found at the site, Boethius believes freshwater sources played a more important role in the development of culture in the area than researchers previously thought.

He is now working on further research to find out exactly what people were eating. He is studying about 400 samples from various Scandinavian sites to determine their isotope values, which show what kind of nitrogen and collagen are present. These values show very clearly the difference between fish from the sea and other animals from the land, but the values for freshwater fish are quite similar to those of land animals.

Boethius said he plans to undertake detailed statistical analyses to compare the fish with human isotope values to overcome this challenge:

You normally don’t use this type of statistical evaluation in this sort of research, but I think freshwater fishing was much more important than previously realized. Freshwater fish are hard to see when you’re studying isotope values, so you can easily miss them. I think they could have been missed in previous research, so I want to do this analysis find out exactly what people were eating.

If Boethius’s research shows that freshwater fish were a bigger part of people’s diets in the Mesolithic period, this could add to the evidence that people had settled earlier than previously thought.

Elsevier has made the following article freely available until May 8, 2016:

Adam Boethius: “Something rotten in Scandinavia: the world´s earliest evidence of fermentation,” Journal of Archaeological Science (May 1 2016). 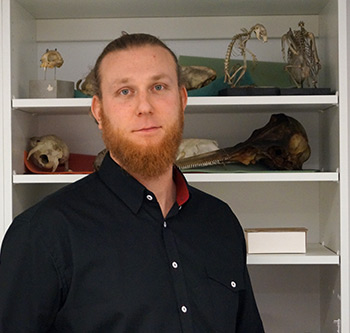 Adam Boethius is a PhD candidate in historical osteology in the department of archaeology and ancient history at Lund University , Sweden. He has a master’s degree in archaeology and historical osteology and has been working in this field since 2006. Adam has mainly worked with zooarchaeological materials ranging from post medieval bone assemblages to bone material from the Early Mesolithic period, which is the focus of his PhD thesis. In his PhD work Adam examines the use of aquatic resources in the Early Mesolithic period where he is evaluating the current model of interpreting the importance of both freshwater and marine resources and aims to show that these resources were more important for human subsistence than previously realized.

The Journal of Archaeological Science provides an international forum for archaeologists and scientists who share a common interest in developing and applying scientific methods to inform major debates through improving the quality and reliability of scientific information derived from archaeological research. The journal publishes papers that present major advances in scientific methods and techniques in archaeology, showcase innovative science, shape global debates, address questions of broad significance and describe studies with far-reaching applicability.