The Netherlands – a top research nation

Surprising? Yes and no. The Dutch like to see their country as a “knowledge economy,” so they might say they saw this coming. But a top position among R&D heavyweights in key research performance areas? Revealing, to say the least.

Elsevier has built up quite a portfolio of comparative research performance studies over the past few years. The SciVal suite of products, based on Scopus data, has allowed us to create overviews of how well countries such as Japan, Italy, India, the UK and the US are doing in terms of research output, research quality and collaboration. Given the Dutch heritage of our company, however, the obvious question remained: where does this leave the Netherlands?

[pullquote align="right"]As a relatively small country, the Netherlands is punching well above its weight. The country is definitely doing something right. The question is: what is it doing right?[/pullquote]

Dr. Nick Fowler, Elsevier’s Managing Director of A&G Institutional Markets, presented the results of his team’s analysis of Dutch research performance at the Impact of Science conference April 25 in Amsterdam. Commenting on the impressive figures, he said: “As a relatively small country, the Netherlands is punching well above its weight. The country is definitely doing something right. The question is: what is it doing right?”

The answer appears to relate to two factors:  international collaboration and a geographically mobile research base. 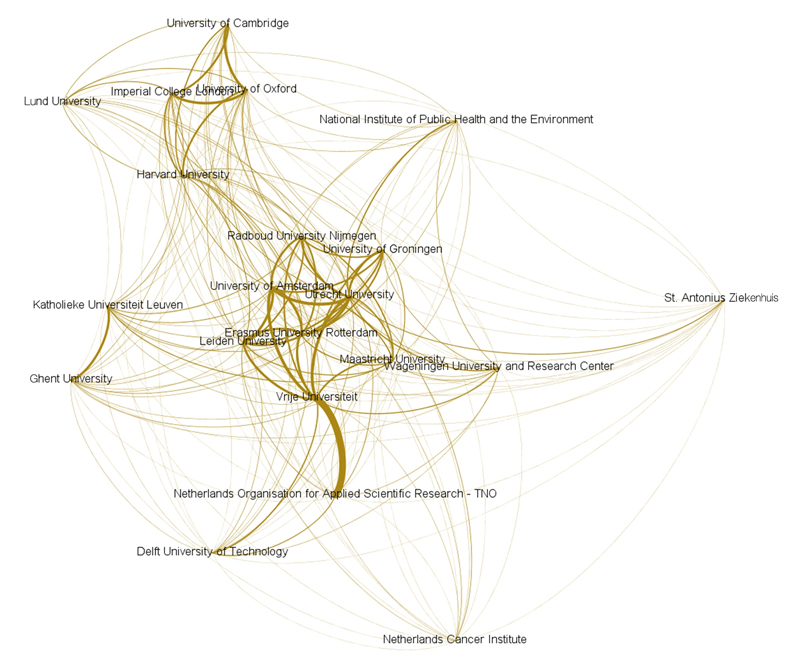 Utrecht University collaboration network in a nutshell. Dutch institutions and the Netherlands as a research nation excel through intensive collaboration, much of it international. (Source: Elsevier SciVal Analytics, Scopus data)
The second factor, the mobile research base, is related to collaboration and is what we call “brain circulation,” or cross-border mobility of researchers, he said.

“The Netherlands has, and has always had, a strong international perspective. It has a history of allowing people to move in and out. This also translates to the world of research. For example no less than 74 percent of authors once affiliated with Dutch institutions have also published at an institution in another country at some point in their careers. That hugely benefits Dutch research.”

The question now is how to sustain the current strong position in the research world or even improve it. In an environment in which other countries invest more and faster in research and development, the Netherlands needs to continue to do what pushed the country to great heights: fully leverage international collaboration opportunities and international researcher mobility.