The life of Pi – and why it has one

Clarification: The 1829 article "Farming Country Parishes" mentions π as a Greek letter, not a number. Thanks to J. Migchielsen for pointing this out this discrepancy in the comments below, and to Femke for raising the question of whether the data in our "Pi Chart" apply to the number Pi only or also the letter. (See the author's response in the comments.) — Alison Bert, Editor-in-Chief[divider]

The number π is a mathematical constant – the ratio of a circle's circumference to its diameter, approximately equal to 3.14159. It has been represented by the Greek letter "π" since the mid-18th century, though it is also sometimes spelled out as "pi."

The first paper published and indexed in Scopus mentioning pi 'π' dates back to 1829 and was called "Farming Country Parishes," published by The Lancet. The earliest published work that has actually had a measurable influence in research is the work "Ueber die Zahl π" (About the number π), published in German in Mathematical Annals in 1882. It received 23 citations.

The most significant paper in the literature that received notable citations does not appear until more than 30 years later, authored by I Langmuir in 1916: "The constitution and fundamental properties of solids and liquid, Part I. Solids," in the Journal of the American Chemical Society. This paper attracted 1,995 citations!

It seems there is a long history of "pi," and I would have thought its application would have mainly been found in physics and mathematics; however, that's not the case, as you can see from the chart below.[divider]

This graphic from SciVal shows that π has had an influence across a vast array of disciplines. 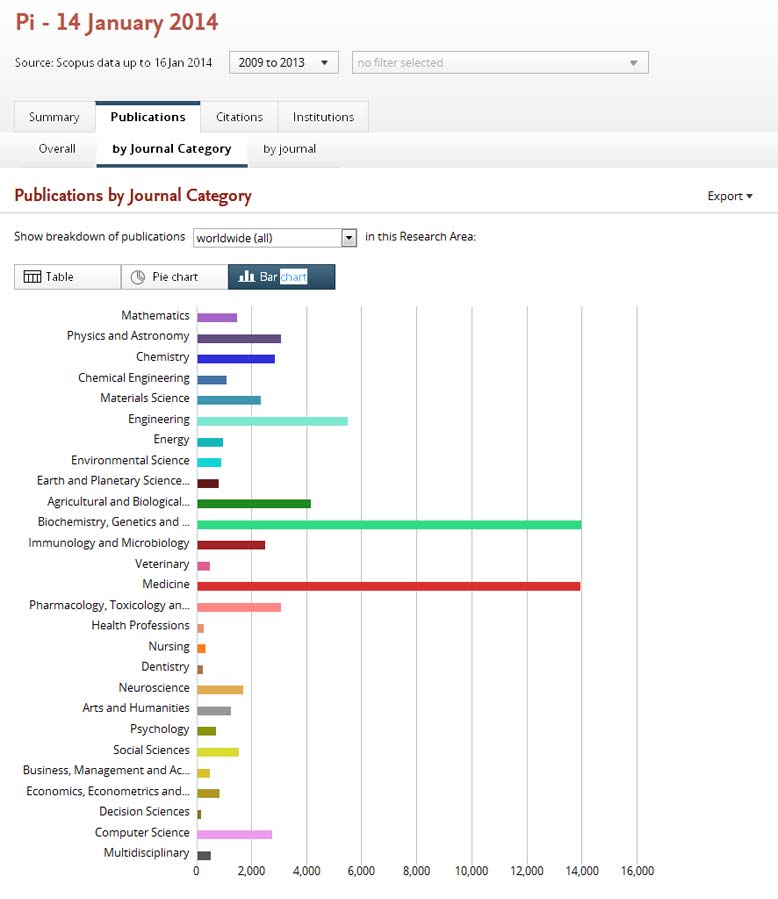 I feel proud to be a Mathematics graduate!!!

Do the SciVal data you are showing apply to the number Pi only, or also the letter Pi?

Hi Femke, the search I did actually covers both the letters &quot;Pi&quot; and the symbol though you need to be aware that the slice of data are taken from 2009-2013 so the total number will be much smaller than the Scopus figures.

You are right the search performed looks at where the symbol π is used or there &quot;Pi&quot; is present in the title, abstract or keyword. Hence, it will not discriminate between π as a symbol or letter.