The Brian Williams debacle: What does psychology say about it?

Confusion or lying? Our brains can play tricks on us, distorting our memories, experts say

Things went south quickly last week for one of American's "most trusted newsmen." 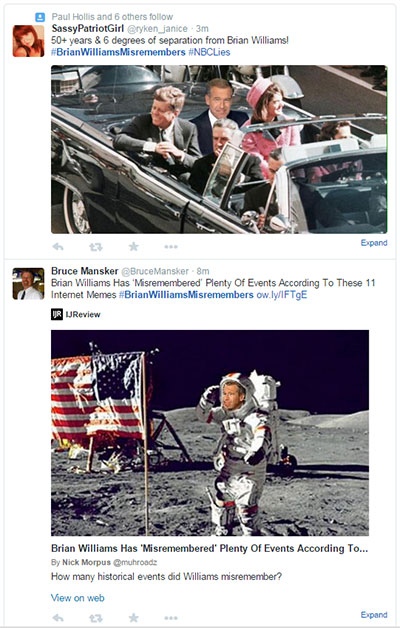 The trouble began for Brian Williams when crew members revealed that he was not actually aboard a helicopter that was shot down in Iraq in 2003 as he had claimed.

His story had became well known when he told it on the David Letterman Show in 2013 saying, "Two of our four helicopters were hit by ground fire, including the one I was in."

In his apology, Williams admitted to being on a different helicopter that was behind the one under the attack and he had mistakenly "conflated" the events. His explanation was met with widespread criticism by fellow journalists and ridicule and jokes on Twitter using the hasthtag #BrianWilliamsMisremembers.

On Saturday, Williams announced he would take a brief absence from the NBC Nightly News broadcast.

My interest in this story was to see whether science could explain what Williams did. In a recent article I wrote for Elsevier Connect, "How good is the science of solving crimes?" experts revealed that far from the world of CSI and Law and Order, eyewitness testimony is often unreliable, and our minds are not as good as we think, leading to confusion over events and even false confessions.

The experts I spoke to about Brian Williams said science has a lot to say about his situation.

Dr. Newcombe likened Williams story to Al Gore's "invention" of the Internet ("During my service in the United States Congress, I took the initiative in creating the Internet.") and John Dean's Watergate testimony, in which he said he told President Nixon of a cancer in the presidency. ("I began by telling the president that there was a cancer growing on the presidency, and if the cancer was not removed that the president himself would be killed by it.") During Dean's testimony before Congress, both the public and the legislators he was testifying before were amazed by the details he remembered. But when the actual tapes were released, it was found that Dean did not have verbatim memory.

"Dean never said there was a cancer on the presidency, and he inflated his role in the events," Dr. Newcombe said, " But the gist of what Dean had to say was true, which is all you can expect from human memory because memories are faulty."

To Dr. Newcombe, the test is when what one says crosses a line. "False memory is important when it's false on an important fact. If you said you were sexually abused by your father and you weren't, it becomes a legal issue. That is when a false memory really matters. Brian Williams was in a helicopter. He was in a war zone. He could have ended up like his colleague Bob Woodruff, who was badly injured in Iraq. But luckily for him he didn't."

Dr. Newcombe also noted that over time, stories drift, condense and get more dramatic: "It's a well-documented phenomenon. I have sympathy for people who are in public life who speak often and quickly and are on the record. Mistakes happen. The question is how much does it matter. And in the case of Williams, I don't think it matters much at all."

Dr. Muskin said that in Williams' case, unless new information is revealed, what's important is that Williams seemed to believe what he was saying:

Being in a helicopter in a war zone is scary. We know Williams was there. He wasn't in the Plaza having a drink. He was in a war zone with soldiers and probably scared and not wanting to let the soldiers around him know that. When the incident occurred his stress levels were probably through the roof    and he put together a story to comfort himself.

Dr. Muskin noted that we all tell stories to comfort ourselves, especially after a scary situation: "Williams' reactions were perfectly normal, and I am not surprised that he remembers what happened to him the way he did. We don't have a video recorder in our brain. All memory is faulty, especially so during traumatic events."

The experts all said that memories do not work the way a court stenographer does. "All of our memories are associated with an emotion," Dr. Muskin said. "Everything that goes into our brain is attached to a feeling. And that plays a key part in the memories that form in our brains. Yes, false memories can be created, but I don't think this is the case with Brian Williams. Telling a story he believed to be true – and now he's ashamed that his memory was not the literal truth. So what?"

Since I started writing this article, there have been several developments. Williams is under investigation by NBC not only for his Iraq story but also his reporting during Hurricane Katrina in 2005. His claims that he saw body float by in the French Quarter, and that he caught dysentery from drinking Katrina, floodwaters are being investigated.

Larry Krell, who in an interview with The Lead host Jake Tapper of CNN, said he was the pilot of the helicopter Williams was on and they were under small arms fire, has recanted his story. He told Tapper, "The information I gave you was true based on my memories, but at this point, I am questioning my memories that I may have forgotten or left something out." In fact, two other pilots, Christopher Simeone and Allan Kelly, told  The New York Times that they — not Krell — had piloted Williams' helicopter, and they did not recall their convoy of helicopters coming under fire."

Meanwhile, it was announced that Brian Williams has cancelled his upcoming appearance on David Letterman.

Many public figures have made claims based on apparently false memories, including Dr. Neil deGrasse Tyson, Mitt Romney and Oprah.

And Williams is not the first journalist or politician to be under scrutiny for what he said. Dan Rather of 60 Minutes relied on documents questioning George Bush's National Guard Service; the documents could not be verified. Lara Logan, also of 60 Minutes, was suspended for six months for her discredited reporting on an attack on the US compound in Benghazi, Libya.

Hillary Clinton who during the 2008 Presidential campaign said she ran across a tarmac to avoid sniper fire after landing in Bosnia in 1996, also may have had a false memory. "I remember landing under sniper fire," she told reporters. "There was supposed to be some kind of a greeting ceremony at the airport, but instead we just ran with our heads down to get into the vehicles to get to our base."

When videotapes showed that there was no sniper fire, she blamed her false memory on being tired. She said, "You know, I have written about this and described it in many different settings and I did misspeak the other day. This has been a very long campaign. Occasionally, I am a human being like everybody else."

David Levine (@Dlloydlevine) is co-chairman of Science Writers in New York (SWINY) and a member the National Association of Science Writers (NASW). He served as director of media relations at the American Cancer Society and as senior director of communications at the NYC Health and Hospitals Corp. He has written for Scientific American, the Los Angeles Times, The New York Times, More magazine, and Good Housekeeping, and was a contributing editor at Physician's Weekly for 10 years. He has a BA and MA from The Johns Hopkins University.