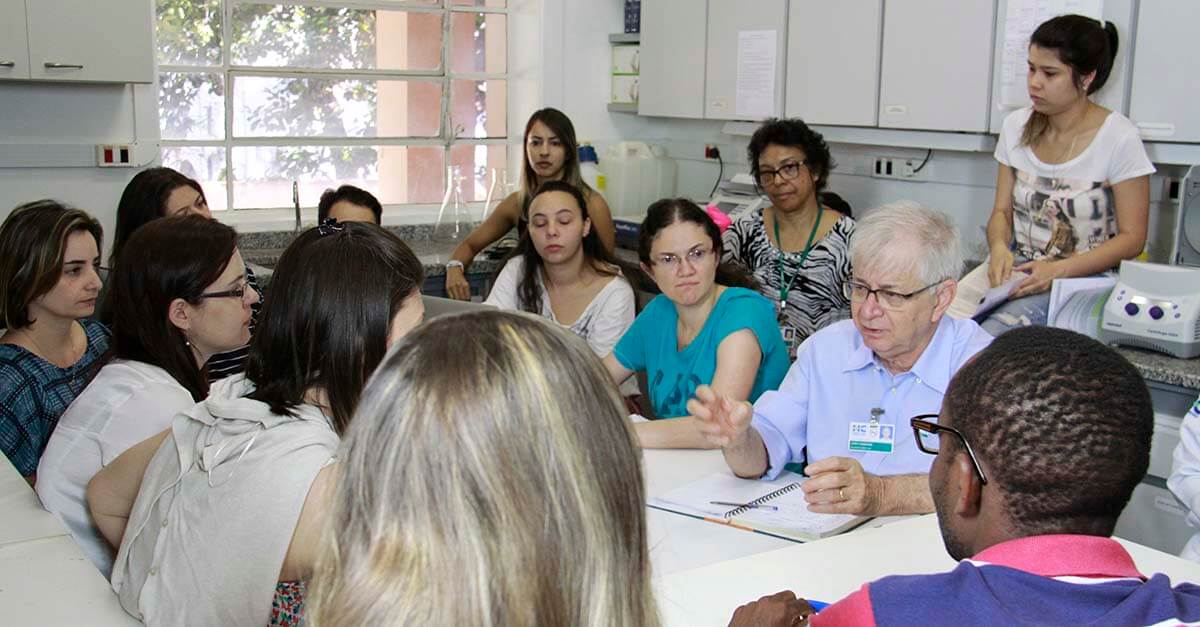 Dr. João Santana da Silva, Professor of Immunology at the University of São Paulo, works with his students on a project to battle the neglected but often deadly Chagas disease.

Prof. João Santana da Silva started investigating the disease in the early 1990s; he wanted to figure out why the many people in his region with Chagas disease were dying so early. Now one of Brazil’s leading infectious disease researchers and Professor of Immunology at the University of São Paulo, Dr. Silva has created partnerships with students and collaborators, building a strong network to battle this neglected disease.

Looking for the answer has not always been easy, but through perseverance, creating valuable partnerships and using ScienceDirect as a guide, he has navigated toward a greater understanding of Chagas disease, revealing the answers that could help save millions of lives.

Dr. Silva is the first researcher to be featured in Elsevier’s Journeys of Perseverance series, which will tell the stories of researchers worldwide who have taken different approaches to their research while using ScienceDirect. Their stories demonstrate how they use the tools and technology of ScienceDirect to discover everything from foundational knowledge to inform their studies and research direction, to the latest breakthroughs from leading researchers ― while revealing their winning strategies and tactics.

It takes a team to tackle Chagas

Taking on Chagas disease is a challenge in itself. So-called neglected diseases like this struggle for funding ― they tend to be prevalent in poorer regions, which means there is little commercial interest in funding research into treatments.

But this is the very reason Dr. Silva first started working on the disease. He grew up in a poor part of Potirendaba in São Paulo state and, like so many others in his community, he had relatives who were suffering with Chagas disease. He believes there are many more people affected by the disease than previously thought, and it was his will to end their suffering that set him on the path to a career in science. He explains:

Many people are affected by Chagas disease here in Brazil. As many as 18 million people could be infected, and about 30 percent of them develop heart disease. These people are unable to work regularly with a heart that grows large, so it’s a big problem ― 5 million people are out of work because of this disease.

Despite its economic impact, little attention has been paid to funding research into the treatment of Chagas disease. Dr. Silva continues:

Like all the neglected diseases, this is a disease of poor people. Pharmaceutical companies are not interested as they don’t want to sell drugs to people who don’t have money to pay for them. So they don’t fund the research into treatments. This is a bad situation but there are funding bodies around the world that want to support our work, if we can show we have a strong enough team behind it.

Success, therefore, is dependent on the strength of the partnerships Dr. Silva forges. When he returned to Brazil in 1992 after completing his postgraduate studies in Seattle, he built his lab at the University of São Paulo and started putting together his research group. They began with a few simple tools ― microscopes and some forensic equipment ― but enthusiasm provided the fuel they needed to do the work.

We had this incentive behind us ― of the people, the students and the government ― to do this research. All of these things made me and my colleagues go ahead to ask difficult questions about Chagas disease and try to answer them.

Over the years, the small group has expanded. By discovering new research on ScienceDirect, Dr. Silva can identify people to meet at conferences and contact about their work to see if they are a fit for his research. Once that connection is made, he includes his potential collaborators in the process of writing projects for grant applications ― with great success.

When we write a project, we have to formulate the questions, clarify our aims, and to answer them we need collaborators. Today we are meeting with cell immunologists, tomorrow with bioinformaticians. We name these people as collaborators on the project and then apply for grants from agencies like the National Institutes of Health (NIH). Our collaborators are experts in their fields who help us answer our research questions; they are an essential part of our work.

Even more important for Dr. Silva is developing his own team’s knowledge. When he first set up his lab at the University of São Paulo, Dr. Silva worked with a few collaborators on his early published research. After a few years he started to invest a lot in training students, who contributed significantly to the work the lab has produced since 1994. 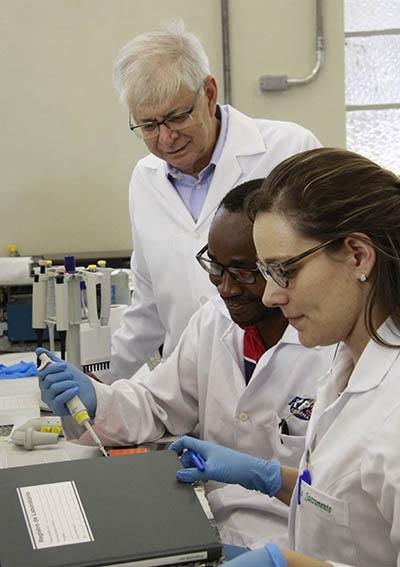 The students start as undergraduates and work closely with Dr. Silva and his colleagues throughout their education to learn different techniques. He has regular meetings with them: on Mondays, the students share their research results, and on Thursdays, Prof. Silva and his students discuss new additions to the scientific literature. This is valuable for Dr. Silva’s research, as he explains:

This is where ScienceDirect helps us a lot. In our lab meetings, we discuss papers published by people around the world. It helps us identify new collaborators, and it also helps me teach the students how to write a good project and a good paper, which has a positive impact on our own papers. The work I’m most proud of is training a lot of students, to give them the opportunity to work, to think, to develop science. We do everything together to see if we can make the students very good. We really work as a team.

Research on Chagas disease is experimental, so getting students into the lab is vital. A lot has changed over the year, according to Dr. Silva:

In the past you had to go to the library, stay in the library and look at the reference section for new publications for days. But this is not necessary now that the journals and books we need are online. The students these days are different ― they want everything in their hands so they can really start to work. The students make a huge contribution to our research.

By contributing to the research, Dr. Silva’s students are helping lay the foundations for better treatments for the millions of people with Chagas disease. Although transmitted by insects, the protozoa T. cruzi is frequently spread through the transfusion of infected blood and from mother to baby during pregnancy. Early diagnosis and treatment are essential, as Dr. Silva says:

We are trying to teach people about the disease so we can identify and diagnose patients. Many are currently undiagnosed and untreated, which means the disease continues to spread. We need to follow these patients to make sure they do not donate blood or organs and infect more people. An effective treatment is also vital to stop transmission of Chagas disease.

Dr. Silva’s lab takes different approaches, including investigating the immunology of the disease at the cellular level and looking at the effect drugs have on the disease. Currently, benznidazole is used to treat Chagas disease. However, it is not very effective and has significant side effects, making it toxic for the people who take it. With his students and collaborators, Dr. Silva is modifying the drug at the molecular level to make it more effective.

We make modifications in the drug and then treat mice infected with the disease to see what effect the modified version has. We have found one particular modification that we can dilute to 1 part in 1,000 and it is still more effective than the original benznidazole. Makin a drug that is more effective at lower concentrations reduces the drug’s side effects, which means patients will no longer be sick because of their treatment.

They are now collaborating with chemists to experiment with different modifications to the molecules to see if they can make it even more effective. Once the modifications are complete, they will carry out more tests in mice in the lab, with the aim of developing a treatment that can be put into clinical trials.

We have to spend a lot of money to prevent new infections, but we also need to kill the parasite. By developing a more effective treatment we can also start to reduce the number of people infected. I think we will have a good treatment for the disease in the near future.

Prof. João Santana Silva is one of various researchers who will be featured in Elsevier’s Journeys of Perseverance series, which will tell the story of researchers around the world who take different approaches to achieve scientific success, using ScienceDirect along the way. 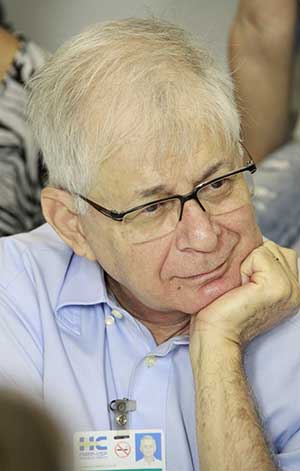 Prof. João Santana da Silva holds an undergraduate degree in biological sciences, and an MSc and a PhD in biochemistry, all from the Ribeirão Preto Medical School at the University of São Paolo (USP). In 1981, Dr. Silva was appointed a professor of immunology in the Biological Science Institute, USP. He moved to Ribeirão Preto Medical School one year later, becoming full professor in 2004. Between 1989 and 1992, Dr. Silva was a research fellow at Seattle Research Institute, Seattle, USA. During his career, Dr. Silva has published over 300 papers, with more than 9,800 citations. His h-index is 54 .

Elsevier has made this article freely available until March 7, 2017: