In the French Edition of the Huffington Post, an Elsevier managing director writes about how science can help find treatments and cures 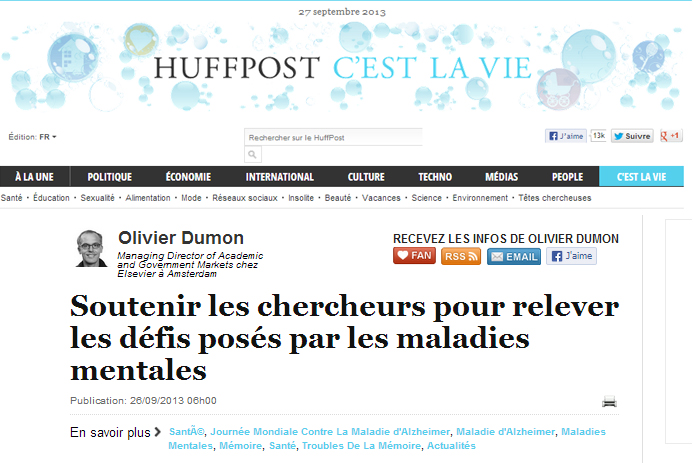 Olivier Dumon's editorial was featured in the French Edition of the Huffington Post. Read a translation below.[/caption]

[divider]In an editorial in the French edition of the Huffington Post, Olivier Dumon, Elsevier's Managing Director of Academic and Government Markets, writes about the role of science and technology in understanding the causes of mental disorders and seeking treatments and ultimately cures. It was published this week in recognition of World Alzheimer's Day. A similar version of this article was published in July in the US edition of the Huffington Post.

This is a translation of the text, presented with the permission of the Huffington Post:[divider] 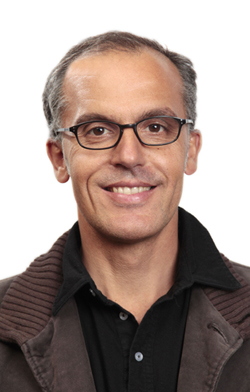 Olivier Dumon joined Elsevier in February 2012 as Managing Director of Academic and Government Markets. Previously, he served as VP of Product Management for AT&T Interactive and Senior Director of Search for eBay.[/caption]

With World Alzheimer's Day taking place on September 21, the spotlight will be on one of today's most predominant neurological diseases. It is one of several that are now part of the global conversation about mental health disorders and the importance of research into its causes and prospective treatments that will bring relief to patients and their families.

Beyond Alzheimer, an estimated 35 million people and their families worldwide are affected by dementia, a degenerative neurological disorder that costs more than $203 billion in health-care-related expenses each year, according to the Alzheimer's Association.

This number is projected to increase to $1.2 trillion by 2050 as the world's population ages. Other mental health disorders such as schizophrenia, Asperger's syndrome, bipolar disorder, clinical depression, addiction and eating disorders are becoming equally prevalent among adolescents.

Globally, the report produced for the World Economic Forum in 2011, "The Global Economic Burden of Non-communicable Diseases" (NCDs), cited that mental health disorders are the leading cause of disability-adjusted life years (DALYs) worldwide. Related global costs are expected to more than double by 2030, imposing an immense financial burden upon families and society as a whole.

When faced with such seemingly overwhelming challenges, we turn, as we always do, to science to provide answers, and in this case the rapidly expanding field of neuroscience. The push to understand complex mental disorders is one of research's greatest challenges. As much as we think we know, we also realize how little we know, and the search for time and money is often just as elusive as the answers we seek.

Alongside with researchers, those who support them by bringing technological and scientific solutions also face challenges that can be equally complex, albeit in a different way. Effective and efficient tools, resources and processes enabling researchers to save time and carry out their research are crucial.

Text-based search engines, as useful as they are, don't deliver the highly specialized information neuroscientists need.

Most researchers employ high-level search terms that focus on the topic of study. For example, "hippocampus learning memory stress" would typically be used by neuroscientists studying the effect of stress on learning and memory and the role of the hippocampus in that process. But what researchers really need are papers describing results of experiments with specific characteristics, such as studying certain neurotransmitters, certain receptors, a certain experimental model or methodology, a specific strain of mouse, and/or perhaps gender-specific mice.

Developing tools that will help solve domain-specific workflow problems and provide access to the sophisticated integrated content that neuroscientists demand is a challenge in which Elsevier is actively engaged. New tools that allow researchers to narrow down a set of papers in minutes that might previously have taken hours of close reading will help to speed up the foundational knowledge process, a time-consuming but critical part of research.

Neuroscientists are indeed running a time trial. The race is on to find the causes, treatments and ultimately cures for a whole host of mental disorders such as schizophrenia, autism or Alzheimer's — and hereby relieve patients and their family.