Pollution could be jeopardizing the reproduction of polar bears, scientists report in Environmental Research journal

In recent years, the polar bear has become an icon of climate change, often being pictured standing on a shrinking piece of ice. But this time, the poor polar bear is facing a different challenge – a reproductive one.

“Pollution could cause polar bears to break their d*cks,” proclaimed John Oliver, speaking on HBO's award-winning TV show Last Week Tonight on Monday. While this is something of a simplification, he’s not far wrong, and he encourages viewers to remember the polar bears during their Earth Day celebrations. 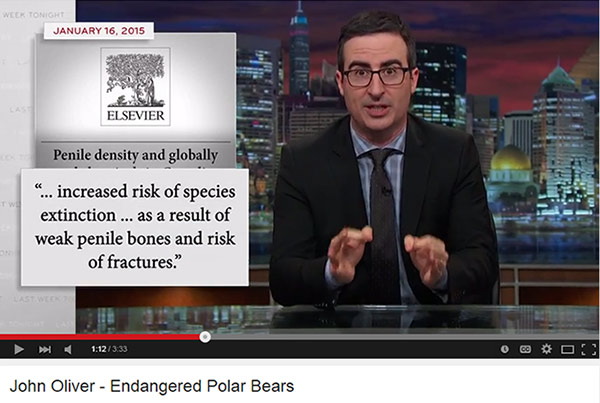 In fact, Oliver was referring to a study in Environmental Research, a journal published by Elsevier. In the article, lead author Dr. Christian Sonne of the Arctic Research Centre (ARC) in Denmark and colleagues acknowledge the plight of the polar bear: "Polar bears have recently received considerable focus as a wildlife species impacted by climate change, since projected sea ice loss is argued to restrict their access to principal prey, such as ringed seals, during the autumn.

But the authors go on to examine an additional concern: that endocrine disrupting chemicals (EDCs) are threatening polar bears’ ability to reproduce.

EDCs – including polychlorinated biphenyls (PCBs) – are chemical pollutants that result from industrial processes. They are known to harm several different vital organs and tissues – including bone. As predators at the top of the food chain, polar bears consume high concentrations of PCBs, resulting in potentially high levels of the chemicals in their bodies.

Like gorillas, hedgehogs and otters, polar bears have a penis bone, called a bacula. They need the bone to mate successfully – it acts as a stiffener and also causes ovulation in the female polar bear. Because of this, the health of the bacula indicates the reproductive health of the polar bear.

The researchers analyzed bacula samples from 279 polar bears born between 1990 and 2000 and noted the bone mineral density (BMD). They plotted the figures against PCB concentrations recorded in the same locations at the same times, to assess whether there is a correlation between bone density and PCB concentration.

The results suggest that the higher the PCB pollution level, the lower the density of the polar bear’s penis bone. The bone becomes weaker at lower density, making it more likely to break and therefore reducing the polar bear’s ability to reproduce.

In their paper, the authors conclude:

Reductions in penile BMD could lead to increased risk of species extinction because of mating and subsequent fertilization failure as a result of weak penile bones and risk of fractures. Based on this, future studies should assess how polar bear subpopulations respond upon EDC exposure since information and understanding about their circumpolar reproductive health is vital for future conservation.

So now the polar bear has something new to worry about: penis fractures and failing fertility. The research captured people’s imaginations, resulting in a flurry of media coverage. “You’ll Never Guess What Our Pollution Is Doing To Polar Bears’ Penises,” screamed the MTV News headline, explaining the science in the deckhead: “We're basically cock-blocking these cute, fluffy bears. Not cool.”

The headlines reflect the reason polar bears in trouble capture our attention: many people see them as “cute, fluffy” animals (they’re actually dangerous carnivores, but let’s not split hairs). Either way, they need our help. As the New Scientist put it: “First climate change, now penile fracture – polar bears have got it pretty rough.”

Social media was moved, too, with Tweets, Facebook posts and blogs talking about the findings:

Meanwhile @DanGraur looked on the bright side:

Aren't we lucky we don't have one: Pollution causes low bone densities and breaks in the penile bones of polar bears. http://t.co/YM7wVWGjeG

And @sparrk gave a shout-out to Elsevier:

Never have I been prouder to be an @ElsevierConnect author /cc @LastWeekTonight pic.twitter.com/OiVMSridS2

Back on the set of Last Week Tonight, out comes Marshmallow – the polar bear with a broken penis. “Come on everyone, this Earth Day, I want you all to think of Marshmallow’s devastated penis,” Oliver implores. “Because while it may not be salvageable, others may still be.”

Elsevier has made this study freely available for three months, until July 21, 2015:

The polar bear penis article got the media hot under the collar: