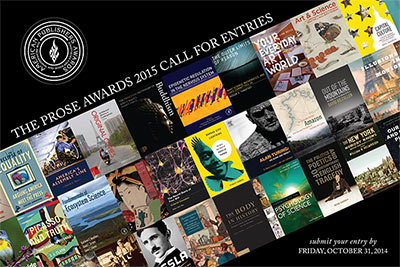 The American Publishers Awards for Professional and Scholarly Excellence — known as the PROSE Awards — recognize outstanding books, journals and e-products as judged by peer publishers, librarians and academics.

The contest is sponsored by the Association of American Publishers' Professional and Scholarly Publishing Division, and the awards will be presented Thursday at its annual conference in Washington, DC. Now in its 39th year, PROSE received a record 540 entries from more than 70 publishers in US and abroad.

Winners will be recognized across all disciplines of the sciences and humanities in more than 40 categories. Of those, one work will receive top honors with the RR Hawkins Award. Last year, Elsevier received this award for Alan Turing: His Work and Impact, edited by S. Barry Cooper and Jan van Leeuwen. Past Hawkins winners have included The Race Between Education and Technology (Harvard University Press), Wiley Interdisciplinary Reviews (WIREs) (John Wiley & Sons), Atlas of the Transatlantic Slave Trade (Yale University Press), and The Diffusion Handbook (McGraw-Hill).

The ceremony will feature the premier of a short film produced and directed by award-winning filmmaker Mary Rose Synek. Inside PROSE will take viewers behind the scenes of the award, from the staff processing the 2,000 pounds of books sent to AAP's Manhattan office, to the judges deliberating to select the winners.

Watch the webcast and join the live tweeting

The award ceremony will be broadcast live from 12 to 1:30 pm EST on Thursday, February 5. To join the Twitter chat, use the hashtag #PROSEAwards.

Alison Bert (@AlisonBert) joined Elsevier in 2007 from the world of journalism, where she was a business reporter and blogger for The Journal News, a Gannett daily newspaper in New York. As Editor-in-Chief of Elsevier Connect, she leads a team of contributors from around the world to publish daily stories for the global science and health communities.