Six ways to succeed in the changing world of science journalism

Over the past 10 years the way we consume information has changed dramatically. News these days comes to us from a vast array of sources and in varying formats.

Speakers and panelists at the biannual UK Conference of Science Journalists (UKCSJ) delved into some these changes, discussing how they affect science journalism specifically and on how science writers can continue to develop themselves amid these changes. The event was held last month at the Royal Society in London.

The key theme running through this year's event was how to make it as a science journalist in a changing media environment – and how to be a good one.

Here are some of their top tips:

1. Use the capacities of digital platforms to bring your stories to life

Favorites included a multimedia presentation of the Serengeti Safari – bringing together two years of footage and imagery of lions in the Serengeti, BBC's partnership with Imperial College London, to design a concept mission to land astronauts on Mars, and Inflight – an interactive data vizualization of air travel using live data streams from FlightStats. These examples showed how a little bit of creativity can help to bring science to life in an engaging and informative manner, without compromising or sensationalizing the data.

There are numerous computer programs and apps available to help science journalists in their work – from social media tools that help identify stories (e.g. Hootsuite, Topsy and Delicious) to those that make reporting more efficient (e.g. Zanran, Kimono and Creatavist). In a session chaired by Daniel Clery, long-time Science magazine news editor and journalist, Mendeley was also discussed. Although originally developed as a reference manager and social network tool for researchers, Mendeley can make journalists' lives a lot easier, too. It's a free tool and includes thousands of public groups that can be followed to help target trending research topics. In addition, journalists can contact scientists directly, and by setting up a personal profile, they can add links to all their articles and list the publications they have written for, helping them to organize their own work.

Radio is a traditional medium that still has the potential to powerfully communicate science. That was the bottom-line message presented in a session chaired by freelance science broadcaster Angela Saini.

"Radio explores areas of science that other media doesn't, or can't," said Sue Nelson, founder of the Space Boffins podcast.

Mohit Bakaya, BBC Radio 4 commissioner, shared his unique formula that helps him work through the thousands of ideas he receives from listeners. His six indicators for a stand-out science story include: emerging, engaging, explaining, emotional, enchanting and exploring.

The power of video content must also not be underestimated, which, in the current social, sharing climate, can generate millions of views. Brady Haran, producer of The Periodic Table of Videos, shared his golden rule: you have to be so excited by the content that you can't wait to share it.

4. Find your voice as a freelancer 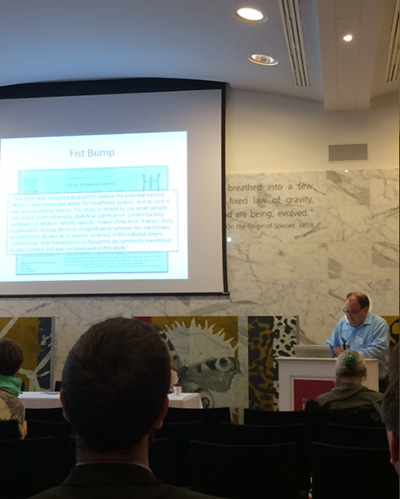 For some, becoming a freelancer can be a huge decision. But given the economic climate, it is a career move that many journalists are finding themselves forced into.Here, a panel of three successful and highly experienced freelance science journalists gave tips on how to take the first steps away from the security of a permanent position and succeed on your own. Priya Shetty, who writes about health and human rights in the developing world, advised journalists to know the interesting people on their beat and speak to them regularly, to develop a brand as a writer, and to trust their instincts.

Richard Vize, who regularly contributes to The Guardian and BMJ, emphasized the importance of being active on social media, using it as a platform for sourcing work as well as building an identity.

Angela Saini strongly advised choosing a specialty and initially writing for niche titles. This helps to quickly build a bank of clippings, she explained, while also helping you learn to trust yourself as a reliable freelancer.

5. Pitch your stories so editors will take notice

To make it as a science journalist, you need to find a way for editors to notice your work. News editors receive hundreds of story ideas a day. How can you make your story stand out from the crowd? What makes a successful pitch?

Here, three budding journalists gave a 3-minute pitch of their stories to a panel of three editors – Helen Pearson (Nature), Ehsan Masood (Research Fortnight) and Hannah Devlin (The Times). Their topics ranged from awareness of prosopagnosia to finding a possible cure for myopia. This was followed by a round of questioning by the editors. In this way, the audience got a glimpse of the editors' thought process in deciding to accept or reject a story. Key points for grabbing editors' attention included:

Editors also shared their personal preferences: Pearson likes to receive polite, short emails as early in the day as possible. Devlin recommends that journalists to keep an online database of their work so she can check their writing skills. And Masood provided a surprising tip to really grab his attention: write a letter and have it delivered by post.

6. Delve into the data

Elsevier provides access to all published articles through free media access to ScienceDirect. In addition, credentialed journalists can also get free access to various Elsevier tools and platforms, including Scopus, Mendeley,* SciVal and ClinicalKey.

* Mendeley is free to all users, but upgrades with larger storage limits are available to media upon request.

Interpreting research papers can be tricky, but it's an essential party of the job. That was the message of panelists Deborah Cohen, investigations editor for BMJ, and Dr. Ivan Oransky, VP and global editorial director of MedPage Today, which just launched its Hype Watch blog, and founder and writer of Embargo Watch and Retraction Watch. They stressed the need to be accurate and thorough in reporting research, and to present statistics in the correct way:

The UK Conference of Science Journalists

The UK Conference of Science Journalists (#UKCSJ) is an initiative of the Association of British Science Writers (ABSW) and was established after the success of the first World Conference of Science Journalists (WCSJ) held in London in 2009. The conference brings together established and aspiring science reporters, writers and communicators, giving them an opportunity to network, develop their professional skills and discuss issues affecting science journalism, with a focus on the profession in the UK.

Having a common goal with science journalists – to inform and educate the public about what is going on in science and the impact of scientific discoveries on our society and planet – Elsevier has actively supported UKCSJ since its first event through sponsorship and attendance. As such, we have been able to see the conference grow both in terms of number of journalists attending and influential science writers and communicators secured to present in the sessions, informing and advising the next generation.[divider]

Press Officer Sacha Boucherie works closely with Elsevier's journal publishers, editors and authors at one end and with science journalists and reporters at the other end with the aim of spotlighting and promoting interesting, topical research articles. She is based in Elsevier's Amsterdam headquarters.