Member economies of APEC (Asia-Pacific Economic Cooperation) have announced their nominees for the 2013 APEC Science Prize for Innovation, Research, and Education, also known as the ASPIRE Prize, sponsored by John Wiley & Sons and Elsevier. In line with this year’s theme, the prize honors a young scientist whose collaborative work in the region has made an outstanding contribution to “sustainable ocean development.”  The award carries$25,000 in prize money.

Dr. Hatta will present the award in Medan, Indonesia, on July 1 alongside APEC meetings. 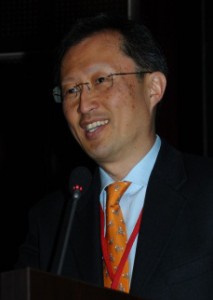 In the words of Elsevier Chairman Youngsuk “YS” Ch:"The ASPIRE Prize recognizes the crucial role young scientists play in advancing research and innovation through cross-border collaborations.  This year’s prize theme of sustainable ocean development serves as a great example of the vital connection between advancing innovation and long-term, economic growth."

Stephen M. Smith, Wiley’s President and CEO, said: "Scientific collaboration across the Asia-Pacific region is driving the advancement of groundbreaking research and innovation.  Wiley is proud to sponsor the 2013 ASPIRE Prize, recognizing those scientists who are helping to solve challenges and create new opportunities for sustainable ocean development."

Asia alone accounted for 89 percent of world aquaculture production by volume and more than 87 percent of all people employed in the fisheries sector globally in 2010, according to the UN Food and Agriculture Organization’s most recent data. It also accounted for two-thirds of all human fish consumption in 2009.

“This year’s nominees call attention to the dynamic scientific networks among researchers, universities, research centers and businesses in the Asia-Pacific region,” said Dr. Alan Bollard, Executive Director of the APEC Secretariat. “Collectively, their work is critical to improving the management and development of ocean resources, and better understanding phenomena that can have a potentially significant impact on the region’s economies.”

“These young scientists are not only helping to safeguard oceans and marine resources in the Asia-Pacific, they are showing us that by heightening scientific collaboration across borders  we can uncover the best science and the best solutions,” said Dr. Agus R. Hoetman, Chair of the APEC Policy Partnership on Science, Technology and Innovation which administers the ASPIRE Prize.

Each APEC member economy may nominate one individual under 40 years of age for the 2013 ASPIRE Prize.

For more on the ASPIRE Prize, visit the 2013 ASPIRE Prize website or contact Mikiharu Shimizu, Program Director for the APEC Policy Partnership on Science, Technology and Innovation, at mk12@apec.org. 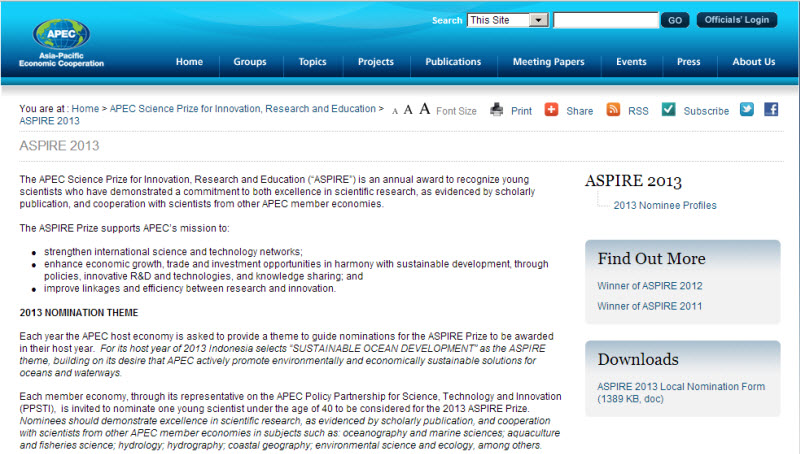 Great support from Elsevier and Wiley. This will be encouraging the young scientists for their further research and development.