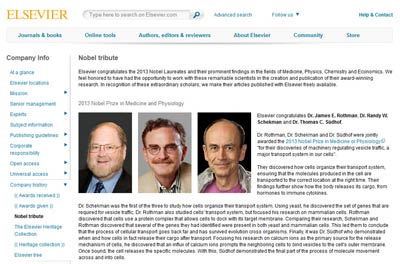 All 11 winners of the 2013 Nobel Prize in Medicine, Physics, Chemistry and Economics have connections with Elsevier, publishing journal articles and book chapters and serving as journal editors, editorial board members or reviewers.

Today, Elsevier launched its 2013 Nobel Tribute website to honor and congratulate these laureates and provide free access to some of the research they published with Elsevier.

On December 10, they will receive their Nobel Medal at the Nobel Prize Award Ceremony in Stockholm.[divider]

They discovered how cells organize their transport system, ensuring that the molecules produced in the cell are transported to the correct location at the right time.

Dr. Schekman was the first of the three to study how cells organize their transport system. Using yeast, he discovered the set of genes that are required for vesicle traffic.

Dr. Rothman also studied the transport system but focused his research on mammalian cells. Comparing their research, Schekman and Rothman discovered that several of the genes they had identified were present in both yeast and mammalian cells. This led them to conclude that the process of cellular transport goes back far and has survived evolution across organisms.

Finally, it was Dr. Südhof who demonstrated when and how cells release their cargo after transport. Focusing his research on calcium ions as the primary source for the release mechanism of cells, he discovered that an influx of calcium ions prompts the neighboring cells to bind vesicles to the cell's outer membrane. Once bound, the cell releases the specific molecules. With this, he demonstrated the final part of the process of molecule movement across and into cells.

Getting to know Dr. Tom Südhof

In 2010, Dr. Südhof talked to The Lancet about music, politics, his favorite book and more. Read the Q&A.

With their combined research, they revealed the critical process of the movement of molecules through cells, which can pave the way for targeted medication for a variety of neurological and immunological diseases, such as diabetes, autism and Parkinson's Disease.

Dr. Rothman, of Yale University, was the series editor for Methods in Enzymology (1992 edition) and is an Editorial Board Member for FEBS Letters. He has also published in a number of Elsevier journals, including Cell and Current Biology, and was a contributing author to Methods in Enzymology.

Dr. Schekman, who heads the Schekman Lab at the University of California, Berkeley, published in the Elsevier journals Cell, Developmental Cell, Cell Biology and Cell Host & Microbe, and was a contributing author to Methods in Enzymology. He has also been awarded the 2013 Otto Warburg Medal by the German Society for Biochemistry and Molecular Biology (GBM) for the discovery of the regulation of protein transport processes in cells.

Dr. Südhof, of the Stanford University School of Medicine, published in the Elsevier journals Cell and Neuron, and was a contributing author to Methods in Enzymology, Handbook of Cell Signaling, Parkinson's Disease, Progress in Brain Research and Methods in Neurosciences.[divider] 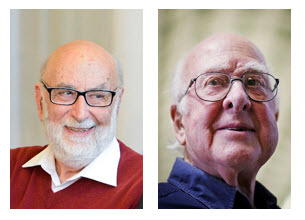 Dr. François Englert and Dr. Peter W. Higgs were jointly awarded the 2013 Nobel Prize in Physics for their "theoretical discovery of a mechanism that contributes to our understanding of the origin of mass of subatomic particles, and which recently was confirmed through the discovery of the predicted fundamental particle, by the ATLAS and CMS team experiments at CERN's Large Hadron Collider".

In 1964, Dr. Englert and Dr. Higgs, independently of each other, proposed a same theory of how matter acquires mass. They believed it was through an undiscovered particle, now known as the Higgs Boson, that all matter has mass and thus that all objects exist. In their theory, the particle blankets everything in a field, including empty space, forcing all matter to interact with this field, thus acquiring mass.

The discovery of the Higgs Boson particle solves one of the largest inconsistencies in modern physics. Prior to confirming Higgs Boson, the Standard Model of particle physics explained all but one remaining element – how mass is acquired. Following the Standard Model, all should be perceived as massless, which evidently, was not the case.

Dr. Higgs is Professor Emeritus at the University of Edinburgh School of Astronomy and Physics. Dr. Englert, a Belgian theoretical physicist affiliated with the Institute for Quantum Studies at Chapman University in California.

Their research can be found in Elsevier's Physics Letters B and Nuclear Physics B. Dr.Englert was also a contributing author to Recent Developments in Quantum Field Theory.

The two ground-breaking CERN studies that confirmed the Higgs Boson were published in 2012 in Physics Letters B, Elsevier's flagship journal in high energy physics, and are freely available on ScienceDirect:

Read more about the Higgs Boson discovery in Elsevier Connect.

The importance of their discovery lies in the combination of using both in one program. It uses quantum physics to display the chemical reactions, obscuring anything else that is not of relevance to reduce the required computing power, and uses Newtonian physics to model the rest of the molecule. This method of modeling has widespread applications in that it can be used to model virtually every chemical reaction, making it a universal method for computerized modeling.

Dr. Karplus was born in Vienna and is affiliated with Harvard University and the Université de Strasbourg. He is Editorial Board member of Structure and has published in a number of other Elsevier journals including Chemical Physics Letters, Structure, Biophysical Chemistry, Biophysical Journal and the Journal of Molecular Biology, and was a contributing author to Advances in Protein Chemistry, Biochemical and Clincial Aspects of Hemoglobin Abnormalities, Methods in Enzymology and Modern Methods for Theoretical Physical Chemistry of Biopolymers.

Dr. Warshel, of the University of Southern California, was born in Kibbutz Sde-Nahum, Israel. He has published in the Elsevier journals Biophysical Journal, BBA – Bioenergetics, Chemical Physics Letters and FEBS Letters, and was a contributing author to Advances in Physical Organic Chemistry, Time-resolved Vibrational Spectroscopy and Methods in Enzymology.[divider]

They developed a method of analyzing stock and bond prices over the course of longer periods.

Dr. Fama's 1970 paper is associated with the "efficient market hypothesis," which explains why prices fluctuate strongly; new information is incorporated into prices at such speed that no accurate prediction can be made.

Dr. Hansen contributed by creating an econometric method that helps to improve the understanding of how a variable (variables are responsible for the price fluctuations) is affected by another variable.

Dr. Shiller discovered that stock prices fluctuate much more than corporate dividends, and his work focuses on what determines asset prices, and how to best save and invest.

With their combined research, they have created a method to make accurate assumptions about asset prices over time, allowing investors and individuals to make informed decision on how to use their savings. While this is not yet a complete method, the research done by the laureates has revealed a number of important regularities that can be used to develop better methods.

Press Officer Sacha Boucherie works closely with Elsevier's journal publishers, editors and authors at one end and with science journalists and reporters at the other end with the aim of spotlighting and promoting interesting, topical research articles. She is based in Elsevier's Amsterdam headquarters and holds a master's degree in social psychology at the University of Groningen in the Netherlands.