Seals drawn to offshore wind farms and pipelines to forage

With many more wind farms being developed, scientists are looking into the their possible effects on wildlife

By using sophisticated GPS tracking to monitor seals' every movement, researchers have shown for the first time that some individuals are repeatedly drawn to offshore wind farms and pipelines. Those man-made structures probably serve as artificial reefs and attractive hunting grounds, according to a study published in the Cell Press journal Current Biology today. 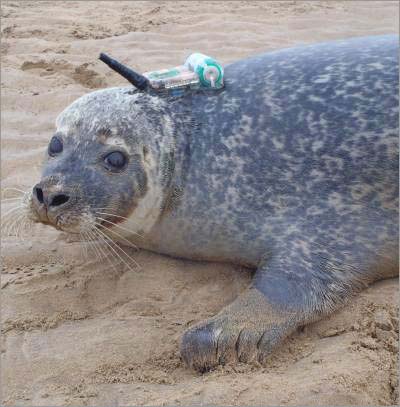 "I was shocked when I first saw the stunning grid pattern of a seal track around Sheringham Shoal," an offshore wind farm in the UK, said Dr. Deborah Russell, a postdoctoral research fellow in the Sea Mammal Research Unit of the University of St Andrews in Scotland. "You could see that the individual appeared to travel in straight lines between turbines, as if he was checking them out for potential prey and then stopping to forage at certain ones."

Russell and her colleagues tagged harbor and gray seals on the British and Dutch coasts of the North Sea. Their data showed 11 harbor seals within two active wind farms, Alpha Ventus in Germany and Sheringham Shoal in the southeast UK. At both sites, some individual seals regularly entered the wind farms and, in some cases, showed these striking grid-like movement patterns as they appeared to forage at individual turbines.

The researchers also observed both gray and harbor seals associating with subsea pipelines. Two seals in the Netherlands encountered a section of pipeline and followed it on multiple trips for up to 10 days at a time.

It's not yet clear what the implications for seals and their prey will ultimately be as the number of active wind farms continues to grow, the researchers say.

The researchers hope to continue their research to understand the population consequences of the massive planned developments. For instance, no one knows yet whether wind farms increase the total amount of prey available to seals or simply concentrate prey in a new and man-made location, making the prey particularly vulnerable to predation. The researchers say it will be imperative to resolve this uncertainty so that anthropogenic structures can be designed and managed to reduce adverse and increase any positive effects of these structures.

This article is freely available for two weeks, until August 4, 2014: