For the first time, scientists have developed an early warning system to predict the risk of dengue infections for the 553 microregions of Brazil during the football World Cup, which starts today and will last for a month. The estimates, published online in The Lancet Infectious Diseases May 17, show that the chance of a dengue outbreak is enough of a possibility to warrant a high-alert warning in the three northeastern venues (Natal, Fortaleza, and Recife) but is likely to be generally low in all 12 host cities. 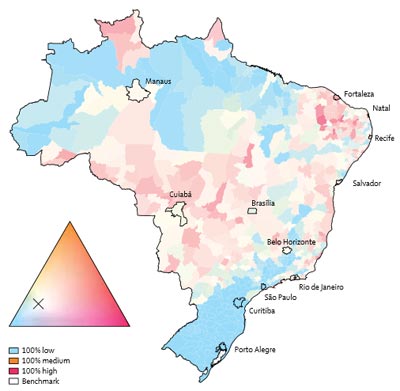 Dengue is a viral infection that is transmitted between humans by Aedes aegypti mosquitoes. In some cases, it causes life-threatening illness. There are currently no licensed vaccines or treatments against dengue. So far this century, Brazil has recorded more cases of dengue fever than anywhere else in the world, with more than 7 million cases reported between 2000 and 2013.

Recent concerns about dengue fever in Brazil during the World Cup have made dramatic headlines, but these estimates have been based solely on averages of past dengue cases. The possibility of a large dengue fever outbreak during the World Cup, capable of infecting visitors and spreading dengue back to their country of origin, depends on a combination of many factors, including large numbers of mosquitoes, a susceptible population, and a high rate of mosquito-human contact.

In particular, climate has an important effect on dengue transmission in epidemic-prone areas where temperature and rainfall drive both mosquito and virus transmission dynamics. The risk of an epidemic increases shortly after a season of heavy rainfall, as occurred in the Amazon during the summer in Brazil.

"Our aim was to take the available evidence on real-time seasonal rainfall and temperature forecasts, transmission dynamics, and social and environmental variables (e.g., urbanization), and combine it with the latest in mapping and mathematical modelling to produce robust risk estimates for the 12 host cities where matches will be played," Dr. Lowe explained.

The researchers estimate little risk of dengue outbreaks during the forthcoming World Cup period in the southern and central capitals of Brasília, Cuiabá, Curitiba, Porto Alegre and São Paulo. However, they predict that there is some chance of dengue risk exceeding medium levels in Rio de Janeiro, Belo Horizonte, Salvador and Manaus. The three cities with the highest risk are Natal, Fortaleza, and Recife, although the risk still remains relatively low.

According to Dr. Lowe: "The ability to provide early warnings of dengue epidemics at the microregion level, three months in advance, is invaluable for reducing or containing an epidemic and will give local authorities the time to combat mosquito populations in those cities with a greater chance of dengue outbreaks."

In a linked Comment, Dr. David Harley and Dr. Elvina Viennet from the Australian National University in Canberra wrote:

Travellers, particularly those attending matches in high-risk cities, identified as Recife, Fortaleza, and Natal by Lowe and colleagues, might return home with dengue. … Those who return home unwell will seek treatment. Doctors must be aware of causes for febrile illness in World Cup spectators. … We expect that few spectators will originate from tropical low-income and middle-income countries, and those who do will probably be wealthy, able to access good medical care, and likely to protect themselves from mosquito bites. Even in those who infect mosquitoes on their return, most will live in dengue endemic countries where the introduction of Brazilian dengue virus will make little difference to local epidemiology. Perhaps a few will return to tropical centres in wealthy countries where A aegypti is present but where the incidence of dengue is low. One such example is Cairns in far north Queensland, Australia, where dengue epidemics causally linked to, but geographically distant from, the World Cup in Brazil are possible.

The article is freely available by registering on The Lancet website: