Collaboration is necessary to grapple with the world’s problems, and research is an important way to bring great minds together from around the world.In research, collaboration leads to significant benefits, some measurable (such as increased citation impact and access to new markets) and others less easily quantifiable (such as broadening research horizons). Therefore, it’s important for governments and research organizations to encourage collaboration 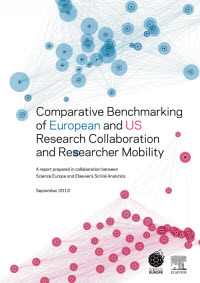 This kind of collaboration was behind a new report by Science Europe and Elsevier, titled Comparative Benchmarking of European and US Research Collaboration and Researcher Mobility.

The report presents basic but critical information about the collaboration and mobility of researchers, which will allow us to better understand the research landscape and how it evolves. The findings will be useful to a wide range of professionals, from individual researchers to universities and institutes that hire researchers, and organizations and government agencies that fund research.

Why research collaboration is a priority in Europe

The facilitation of collaboration has a positive impact not only on the science conducted but on broader objectives, from enhancing domestic prosperity to addressing specific challenges.

Meanwhile, researcher mobility – the extent to which researchers change their institutional affiliations among states and countries – can reflect the circulation of ideas and the strengthening of collaboration networks, and on average bears significantly higher citation rates.

This is why promoting research collaboration has become a priority in the European Union. This goal has also prompted the European Commissioner for Research, Innovation and Science, Máire Geoghegan-Quin, to build the European Research Area (ERA), which aims to ensure the free circulation of researchers, knowledge, ideas and technology across Europe.

Research collaboration and mobility are key topics for the ERA as well as for Science Europe and the European Commission.

It is therefore important to understand Europe’s research environment and the levels of collaboration in Europe. To put these levels into perspective, the report benchmarks Europe with the United States.

Papers were divided into categories of collaboration, and European countries were analyzed as geographic units comparable to US states. Similarly, 41 countries of Europe were treated as a “region” that is comparable to the 50 US states, also referred to as a region.

The analysis conducted by Elsevier’s SciVal Analytics team based on Scopus data, showed that levels of single authorship and single institution outputs are essentially the same between Europe and the US. Combined these categories account for 43% and 42% for Europe and the US respectively.

Where do we go from here?

Does this mean that all European researchers should now go out and seek collaborators to work with outside of Europe?

Well, not exactly, though the statistics do suggest that this would have a positive effect.

In the end, these figures are presented to help underpin some of the assumptions we make about the positive effects of collaboration – and in doing so, should help stimulate the ongoing debate among governments, funding organizations and institutions to encourage collaboration. They all need to continue to break down barriers to collaboration and implement well thought-out schemes to encourage both collaboration and researcher mobility as the benefits are evident.

A report that will follow in a few years should be able to indicate whether we’ve been doing a good job at it. [divider]

Iris Kisjes has worked at Elsevier for seven years, the past four in communications. She is currently Senior Corporate Relations Manager, based in Amsterdam. She has a keen interest in the knowledge economy, especially in relation to the valorization of science and the longevity of the higher education system. [divider]