Book historian Dr. Nil Palabiyik writes about the books she studied as part an Elsevier-sponsored research fellowship at Leiden University's Scaliger Institute. These include books published by the famous House of Elzevier – the printer that would inspire the name of the modern Elsevier, founded in 1880.

Old books fascinate me. I travel the world in search of rare editions, and that peculiar smell of vellum bindings makes my heart beat faster. I get excited when I open a volume to find annotations in beautiful 17th-century handwriting, or when I catch sight of an elaborate manicule — a little hand pointing to important passages or difficult vocabulary.  So my first visit to the Elsevier office in Amsterdam to view the Elsevier Heritage Collection was the highlight of my research fellowship term. Being accompanied by two academics with insider knowledge about this vast collection of 2,000 volumes – Sjors de Heuvel (@sjorsdeheuvel), the curator of the Elsevier Heritage Collection, and Kasper van Ommen, coordinator of the university library’s Scaliger Institute – only added to my excitement.

I came to Leiden primarily to work on the learning of Turkish in the Low Countries during the 17th century. Leiden in the early 1600s had become an important center for the study of oriental languages thanks to the presence of humanist scholars such as Thomas Erpenius (1584-1624), a Dutch scholar who became the foremost orientalist of his time, and Jacobus Golius (1596-1667), another leading Dutch orientalist. Both Erpenius and Golius were the product of the Leiden academic environment, which took its strength not only from the strong scholarly community of the university but also from the accessibility of good publishers. Printers, like paper merchants and booksellers, are first and foremost businessmen who have to ensure the profitability of their enterprises. But the printing trade, particularly in university towns, also depends on the scholarly input from learned men such as authors and editors, in addition to the skills of composers and proofreaders. In the late 16th century, Francis Raphelengius (1539-1597), the son-in-law of the celebrated printer Christophe Plantin of Antwerp, was at the helm of the leading publishing house for oriental languages. The Leiden office of Plantin is believed to be the first proper press for Arabic fonts on Dutch soil. Raphelengius himself was a man of letters and of considerable oriental learning who held the chair of Hebrew in Leiden and wrote his own Arabic dictionary, Lexicon arabicum, published posthumously in 1613 by his sons. His three sons, Christophe (1566-1600), Franciscus (1568-c. 1643), and Justus (1573-1628), ran the office from the death of their father until 1619. All were scholars of oriental languages and published their own works.

The Dutch orientalist Thomas Erpenius was the first formal chair of Arabic in Leiden and his most influential work was his Arabic grammar, printed by the Raphelengius brothers in 1613. Erpenius's grammar was so informative and well written that it continued to be used as a standard work of reference until the 19th century. In 1614, the Arabic compositor to the Raphelengius press died which left Erpenius with no means to publish his future work. An adamant and resourceful man, Erpenius came up with a quick solution. He was a great believer in the power of print and the importance of publishing, so he established his own press in his home. He was so enthusiastic in his typographical endeavors that he had a new Arabic type cut specifically. Erpenius published a number of good quality editions with this type, punches for which are now housed in the offices of Joh. Enschedé printing company in Haarlem. 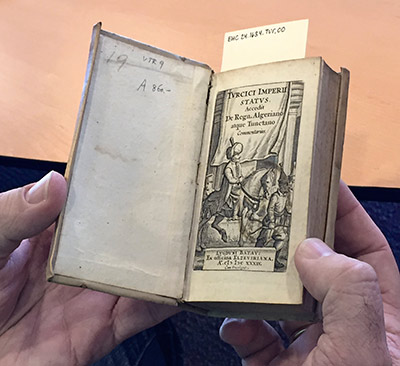 A peek into a 17th-century travel guide

In Turcici Imperii Status (The Current Condition of the Turkish Empire), author Giovanni Battista Montalbano dwells on, among more serious topics such as the state formation and military structure of the Empire, the world famous Turkish hospitality and abundance of food in Constantinople. He reminds the “pleasure-seeking traveller” of the availability of “baths, taverns, inns and other places of delight.” As he moves on to giving a lavish catalogue of local drinks, he comments that the widely held view that Turks abstain from drinking wine is a misconception. Even so, Turks preferred to drink “fiery wine,” a predecessor of today’s popular aniseed-infused spirit raki and an “ink-black, pungent and bitter” hot drink “prepared on a small pot over charcoal,” which the locals called café, marking our author’s first encounter with Turkish coffee. Other popular drinks mentioned by Montalbano include an alcoholic variety of boza, a milk-colored fermented drink made of ground cereals and ayran, a savory, yoghurt-based soft drink, both of which are fervently consumed in modern-day Turkey almost 400 years after the book’s publication.

As such, the information provided by the guidebook was undeniably useful on a practical level for those readers who wished to travel to the Levant and immensely eye opening for those who never intended to leave their hometown.

The Elzeviers enter the picture of oriental book publishing in 1625 with Erpenius's death and Isaac Elzevier’s acquisition of his press and types for the handsome amount of 8,000 guilders. The House of Elzevier was by then the official printer to Leiden University, and it became arguably the most important oriental press in Western Europe. During this period, they published important reference works including Jacobus Golius's Arabic-Latin lexicon printed in Leiden in 1653. The Elsevier Heritage Collection is home to two unique copies of this dictionary, which can be found here and here.

But the real strength of the House of Elzevier was travel literature offered in small format at affordable prices. Between 1625 and 1649, Elzevier published a series of books on foreign countries often referred to as the “Republics,” akin to the modern-day travel guides. The series of 35 volumes capitalized on the 17th-century need for information about unfamiliar regions and were designed as a movable library with compact volumes that would neatly fit into a gentleman traveller's custom-made case.

The chosen language for the series was Latin, the common scholarly language at the time, which made these editions accessible to readers from all over Europe.

The volumes depicting the landscape, people, customs and languages of England or France were informative enough, but what really tickled the imaginations of early modern readers were the tomes devoted to faraway and mystical lands. One immensely popular “Republic,” published in 1630, is devoted to Turkey and features the writings of Giovanni Battista Montalbano (1596-1646), a Bolognese traveller who also wrote an Italian-Turkish dictionary, and the celebrated Flemish diplomat, Ogier Ghislain de Busbecq (1522-1592), famous for his “Turkish letters,” which were included in this volume. “Republics” were often devoted to countries or whole regions, but Constantinople, the alluring capital of the Ottoman Empire, was such an important destination that a separate volume dedicated to the “Queen of Cities” was printed in 1632. Due to popular demand, a second edition of the volume on Turkey came out the next year. 1633 also saw the publication of a volume on Persia, with excerpts recounting the perilous journeys made by various European travellers through Isfahan and Hormuz.

These richly informed and vividly illustrated books served as a window into the Orient at a time when maps were inaccurate, knowledge of the East limited and myths about foreign people abundant. Thanks to these editions, the topography of these regions and the religions, languages, customs, attire and culinary culture of the diverse peoples who populated the Near and the Middle East became accessible to the European readers. The role the Elzevier publishing house played in demystifying the Orient and making it part of the daily lives of early modern audiences was undeniably significant. The full set of these neatly printed, tightly bound pocketsize volumes offers us a unique glimpse into the early modern knowledge of exotic lands and attitudes towards foreign cultures.

To view the Elsevier Heritage Collection

You can also view the books online in the Elsevier Heritage Collection Catalogue. 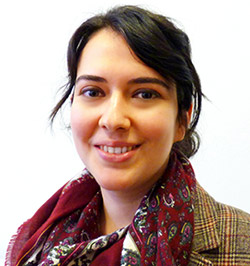 Dr. Nil Palabiyik is Research Associate at the John Rylands Institute, University of Manchester. She is a book historian interested in Greek publishing and book trade in the Ottoman Empire during the hand-press period. Her current research focuses on scholarly marginalia and ownership marks in early modern Turkish dictionaries and grammars printed in Europe. Nil studied in York and London, lectured in Istanbul and held research fellowships at the Scaliger Institute, Leiden and the Herzog August Bibliothek, Wolfenbüttel.