Q&A with Director of the International Centre for Theoretical Physics

As ICTP turns 50, Dr. Fernando Quevedo talks about changing with the times – and new programs for researchers and PhD students 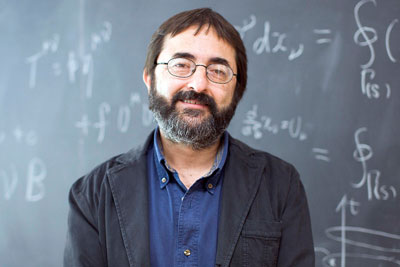 Dr. Fernando Quevedo, a theoretical particle physicist from Guatemala, has served as Director of the Abdus Salam International Centre for Theoretical Physics or ICTP in Trieste, Italy since 2009. ICTP celebrated its 50thanniversary this week. Dr. Quevedo explains:

In 1964, when ICTP was founded by UNESCO, the scientific world was in a very different place than it is today. Science itself has developed very rapidly. Our mission today is to perform physics research at the highest possible level and to promote physics and its related fields all over the world, particularly in developing countries.

Based on this mission, Dr. Quevedo has developed a five-pronged strategy to expand the impact of ICTP and adapt to the rapid changes in the scientific community.

Recently Dr. Eleonora Presani, a former particle physicist at CERN who serves as Publisher of Elsevier's Physics journals, interviewed Dr. Quevedo in Trieste about ICTP's legacy and what it currently offers researchers.[divider]

ICTP was initially focused on high energy physics, including cosmology and astroparticle physics. Over the years, they expanded their focus to include condensed matter and mathematics. ICTP also added a group called Earth systems physics (climate change and geophysics) as well as applied physics, such as telecommunication, and electronics.

When I arrived, I saw an important opportunity to expand in three additional areas: Quantitative Life Sciences, Renewable Energies, and High Performance Computing. We've made progress by hiring new professors, opening new postdoc positions, and organizing events. We've also been able to expand our renewable energy portfolio through collaboration with the African Network for Solar Energy, while high performance computing has established a new master's degree program with SISSA.

How does ICTP support researchers in developing countries?

ICTP's involvement in developing countries is continuously evolving through our many partner institutions worldwide. We just founded a new partnership in Sao Paulo, Brazil, to represent South America. We have another in Chiapas, Mexico, to cover Central America and one in Turkey to cover Eurasia. Collaborations are also planned in China and in Rwanda to cover Asia and Central Africa. Financially, all of the institutions are supported by their local government. In Brazil, for example, ICTP provides the know-how, and the Sao Paulo government provides the funding. In practice, however every institution takes a different role and shape depending on the needs of that country and region. For example, Brazil is eager to have researchers from US or Europe. So, while ICTP supports researchers from other South American countries to attend, Brazil supports American and Europeans researchers.

ICTP has always invested in capacity building and has a robust teaching program. Since we are not a University, however, in order to have joint PhD programs, we partner with organizations such as the International School for Advanced Studies (SISSA) and the University of Trieste. Each year, ICTP offers 45 to 50 students from developing countries the possibility to be trained for a year and then be admitted to PhD programs in the field of high energy physics, condensed matter, mathematics and climate change. As a new project, we are joining the School of Doctorate Environmental and Industrial Fluid Mechanics offered by the University of Trieste. In addition, this year, we launched a master's degree in medical physics in collaboration with the University of Trieste and are working with SISSA to organize a master's degree in high performing computing. Ideally, ICTP would like to be able to offer a master degree from the United Nations University. Our students work very hard while they are here, but their work isn't always recognized by other universities.

Do ICTP researchers usually return to their home countries after being trained?

One of ICTP's priorities is to ensure that researchers are able to keep working in their countries. In one of the programs, researchers spend three months at ICTP and the rest of the year in their own country. This ensures that researchers are not isolated from the rest of the larger scientific community, but at the same time can share their new expertise with their own peers. ICTP's newly founded local centers are important for increasing indigenous scholarly resources and helping scientists to improve their own environments from within. ICTP has also created a new program called ICTP Ambassadors, in which scientists all around the world teach and train researchers across the developing world.

Is ICTP engaged in Internet teaching and e-learning?

ICTP would like to develop online distance learning as well as a guide for researchers from developing countries to provide them with systematic information how to reach courses and resources.

In addition, the E-Journal Delivery Service program (eJDS), run by the Marie Curie Library with the participation of leading scientific societies and publishers such as Elsevier, is an excellent example of our research capacity building vision. eJDS provides free document delivery access to individual physicists from developing countries with insufficient bandwidth to access the research they need.

Unfortunately, eJDS is not as widely known as it should be. We hope to further expand the service with our participating publishers to reach physicists in emerging regions with insufficient coverage (such as Argentina, South Africa, and India). Many of these countries have unequal distribution of wealth, and while some cities are well connected and rich, others are completely out of reach and under-resourced.

What about women in science?

Promoting women in science is a key mission for ICTP. During our 50thanniversary celebration, we will honor two female scientists who won the ICTP Prize this year: Yasaman Farzan (Institute for Research in Fundamental Sciences, Tehran, Iran) and Patchanita Thamyongkit (Chulalongkorn University, Bangkok, Thailand). The award will be given by the UNESCO's Director-General Irina Bokova. The 50th celebration will take place over four days, with many high profile representatives such as the Directors General of CERN, UNESCO, the International Atomic Energy Agency, the International Telecommunication Union, and ministers of science from different countries, as well as top scientists speakers from all around the world.

There will also be a session dedicated entirely to women in science, centering on the importance of helping women not only to start their careers, but also to maintain them during family-building years. We're very pleased to note that given the Physics and Maths focus, ICTP is also a partner of the Elsevier Foundation Awards for Women Scientists in the Developing World this year. We will be offering each of the winners free attendance and accommodations at one of ICTP's workshops and conferences.

What does ICTP mean for Italy?

ICTP certainly has a global impact, but it's also extremely important for Italian research and the city of Trieste itself. Trieste is now often known as the Italian "city of science" since so many scientific and international institutions are based here. I'm proud to say that much of this expansion has been initiated by ICTP, which was the first institution to start working in the city. In addition, some 30 percent of the permanent scientists at ICTP are Italian, so the Italian research impact is considerable. Often our Italian scientists have come to us from universities in Europe or in the United States, and ICTP managed to attract them back to Italy, fighting brain drain in our own back yard.

Italy is also involved in an ICTP program called TRIL (Training and Research in Italian Laboratories). It is focused on inviting scientists from developing countries to come and work in Italian laboratories, which in return can benefit by enhancing their international presence and collaborating by high level scientists.

Dr. Fernando Quevedo of the University of Cambridge, a Guatemalan national, was appointed director of ICTP in October 2009.

Dr. Quevedo is a well-known theoretical particle physicist with wide-ranging research interests in string theory, phenomenology and cosmology. He was awarded the 1998 ICTP Prize in recognition of his important contributions to superstring theory.

He was born in 1956 in Costa Rica and obtained early education in Guatemala. He obtained his PhD from the University of Texas at Austin in 1986 under the supervision of Nobel Laureate Steven Weinberg.

Following a string of research appointments at CERN, Switzerland, McGill University in Canada, Institut de Physique in Neuchatel, Switzerland, and the Los Alamos National Laboratory, as well as a brief term as professor of physics at the Mexican National Autonomous University, Dr. Quevedo joined the Department of Applied Mathematics and Theoretical Physics at the University of Cambridge, UK, in 1998, where he is currently Professor of Theoretical Physics and Fellow of Gonville and Caius College.

Call for nominations: Elsevier Foundation Awards for Women Scientists in the Developing World

2015 awards are for physics and mathematics — deadline is October 17

The Elsevier Foundation Awards recognize excellence in research by early-career women scientists in Africa, the Middle East, Asia, Latin America and the Caribbean.This year's award are for physics and mathematics.

The awards are organized in collaboration with the Organization for Women in Science for the Developing World (OWSD) and The World Academy of Sciences for the Developing World (TWAS). In addition, this year the Abdus Salam International Centre for Theoretical Physics (ICTP), is offering each of the winners free attendance and accommodations at one of ICTP's renowned workshops and conferences.

The five winning scientists will receive a cash prize of $5,000 and all-expenses paid attendance at the 2015 AAAS Annual Meeting in San Jose, California, where they will be honored in an award ceremony. The winners also will receive a year's access to Elsevier's ScienceDirect and Scopus, the world's largest abstract and citation database of peer-reviewed literature.

Eligibility: Nominees should be women in physics and mathematics early in their careers (within 10 years of receiving a PhD) from the 81 scientifically lagging countries as defined by TWAS.

Domiziana Francescon is a Corporate Responsibility intern for the Elsevier Foundation. She is finishing a master's degree in Book and Digital Media Studies at Leiden University in the Netherlands.