As I type this, I am listening to Christmas music with my feet up, the air conditioning cranked, looking out at construction workers carrying buckets of cement on their heads with the sun-drenched Indian Ocean in the distance. It all feels very incongruous to the Novembers I've always known. I keep forgetting that Thanksgiving is coming up, and seeing pictures of people's snowy yards on Facebook makes me feel extra smug about the beautiful uninhabited island beach where I spent last Saturday. 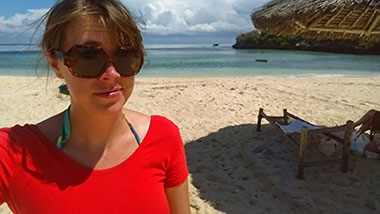 Mary Ann Zimmerman (@camdenserials) is a Senior Acquisitions Editor for Science and Technology Books at Elsevier, based in London. She has a master's degree in Library and Information Science from Drexel University in Philadelphia and is currently in Tanzania as part of the Elsevier Foundation's Publishers Without Borders program.

She has been blogging about her experience in Tanzania at maryannz.tumblr.com.

Read more about VSO and its program to strengthen publishing in Tanzania.

During our first week in Dar es Salaam, Tanzania, we spent a lot of time preparing our training presentations for the books publishing workshops we are to run while we are here. Since we often worked with the VSO volunteer who is coordinating the larger "Publisher Without Borders" project, we typically met on the terrace area of our hotel, where there is space for all of us with electrical outlets. The ocean breeze made it a lot easier to develop three days' worth of material. Elsevier Facilities teams should consider this point for future office moves.

On November 11, the first books publishing workshop got underway in the library of Muhimbili University of Health and Allied Sciences (MUHAS). I wasn't sure what to expect. We were told to keep the information very basic and had very little knowledge about the Tanzanian publishing landscape. One thing we did learn in advance is that the Tanzanian government announced recently that they plan to take control over scholarly publishing throughout the country. This means that every primary and secondary school course will use the same government-issued textbook. Not much more information about the motivation or timeline for this change was communicated.

Given these changes, how could we expect anyone working in publishing to show up excited to learn skills for a job that might not exist in a year's time?

Beyond that, I was very nervous about boring the life out of the room. We've all been in training sessions where things drag on and don't contribute anything new to our skillsets. Filling three days with publishing workflows and commissioning strategies felt like it could go either way. Almost instantly, however, my concerns were allayed.

Workshop participants were asked to split into two groups and to create fictional publishing houses. We gave them time throughout the three days to apply things they had learned to build a strong publishing strategy and pitch. The two teams – "Maarifa Publishing House" and "Soma Educational Publishing Company" – got so into the project that many people worked through their lunch break on the last day to finalize their presentations.

The teams incorporated information from our workshop, including a vision, target audience, marketing plan for a fictional book launch, staffing plans, print and electronic publishing strategies, and clear goals they would like to accomplish with their new organizations. Soma Educational Publishing Company chose to pitch a Physics textbook aimed at middle school students, while Maarifa Publishing House pitched a topical book on building collapse to sell to architects, engineers, surveyors, lawyers, researchers and university students.

Both teams delivered fantastic presentations and were so enthusiastic throughout the training. Feedback was great. I thought it would feel like a lot of work and that I'd be relieved when it ended, but I was actually sad when we were all saying our goodbyes. I really liked the group – the woman from LawAfrica (whose amazing outfits I envied all three days!) who spoke eloquently about options for book distribution in East Africa; the man with 40+ years of publishing experience who contributed so much to conversations on local context; the young and enthusiastic librarian whose library was publishing books by their professors to make money to increase their budget; the graphic designer who was entirely new to publishing but engaged and eager just the same. It was a really special group, and I walked away with as many notes as they did, I think.

Here are some of the things I learned:

With a little bit of research, we were able to give them some viable options for electronic sales and e-book distribution. Some publishing houses are closer to making this a reality than others, and it's important to make sure the financials make sense for their business. It's a challenging but exciting time for scholarly publishing in Tanzania, and I hope our workshop was able to help at least a little bit.

Hearing their experiences and pain points made me so glad that I do what I do and that there's a global community of people who want to put quality information into the hands of the people who need it.

At dinner one evening, after I made an exasperated sound in response to the delays, smashed wine glasses, and mistakes with our orders, "the man sitting next to me leaned over and said, "T.I.A.," then smiled. "This is Africa."

It's a response I've gotten used to in its various forms. More commonly, I've heard "That's Tanzania!" – always spoken with a laugh and referring to the fact that things change at a moment's notice, and you can never really properly plan. I've heard it said after a taxi didn't show up for an hour after it was scheduled to arrive, when a storm caused a power surge that knocked an entire office's computer systems out for two days, and when the air conditioner dripped so uncontrollably during the second day of the workshop last week that we had to pack up and move to another room. They use the phrase "pole pole" to remind us that things often move slowly.

[pullquote align="right"]"That's Tanzania!" – always spoken with a laugh and referring to the fact that things change at a moment's notice, and you can never really properly plan.[/pullquote]

Even in the frustrating moments, I think all of these things have helped us to slow down and really enjoy the experience. The relaxed nature of Tanzanian culture also means that everyone is friendly and quick to laugh. We've had taxi drivers who want to teach us Swahili on the drive back to the hotel. We had a long night of interesting conversation over drinks with a bar owner in Zanzibar. The manager of the hotel we stayed at a couple weekends ago offered to join us on our walk to dinner so we wouldn't get lost in Stone Town's confusing streets. And one man walking down the street told Shirley that he "had things he needed to tell her," although that was a different experience altogether.

Last night, I sat on the beach looking at the southern hemisphere stars and listening to the waves while laughing as we plotted a Thanksgiving celebration that involves beer, pizza, and teaching our Dutch and South African guests how to make hand turkeys. The locals always greet you with the words "karibu sana," which means "you are very welcome." It really has felt that way since day one, which has made the experience of being away from all friends and family in an entirely foreign setting a lot easier.

Publishers without Borders is part of a two-year research capacity building project: Strengthening Indigenous Academic and Digital Publishing. Participating organizations include VSO, the Commission for Science & Technology in Tanzania (COSTECH); INASP, a nonprofit with over 20 years of experience building research in developing countries; and the Elsevier Foundation. To learn more about the Elsevier Foundation's involvement, contact Ylann Schemm (@ylannschemm), Elsevier Foundation Program Director, at y.schemm@elsevier.com .