Pre-exposure prophylaxis — an end to HIV or a social controversy?

Antiviral therapy is already well known in the treatment of HIV/AIDS, but it can also be used to prevent new infections

Dr. Sheba Agarwal-Jans, Publisher of Elsevier’s Microbiology journals, worked with the Elsevier Pride Network to organize a panel on pre-exposure prophylaxis (PrEP) for HIV/AIDS, serving as moderator. Here she writes about the panel and their conclusions and recommendations.

Without a cure or a vaccine, the HIV/AIDS epidemic continues to spread and claim lives in its fourth decade. There are more than 2 million new cases recorded worldwide every year, according to the US Center for Disease Control (CDC) and UN AIDS. And these statistics do not account for people who are unaware of their infection. 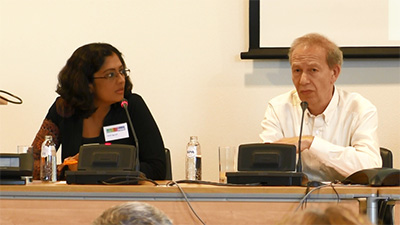 Currently, the best treatment for HIV-positive individuals is a combination of three or more antiretroviral drugs (ARVs). ARVs improve the patient’s quality of life, making HIV infection a chronic condition rather than a death sentence as it used to be. ARVs are also used as a post-exposure prophylaxis, taken within 72 hours of possible exposure.

Can ARVs be used to stop new infections from occurring in the first place – that is, as a pre-exposure prophylaxis (PrEP)? Scientists now have strong evidence that that the use of ARVs by HIV-negative people can prevent new infections very effectively. Specifically, the drug used in PrEP is Truvada, a fixed-dose combination of two ARVs (tenofovir and emtricitabine) manufactured by Gilead. PrEP to the at-risk community could be what the birth control pill was for women — quite simply, a revolution.

But is it really that straight-forward? What are the social implications of PrEP? Will it really be a means of slowing down the worst epidemic of humanity – or an unnecessary financial burden on society? Why is PrEP readily available in the United States and not in Europe?

To answer these and other questions, the Elsevier Pride Network organized a panel discussion on June 18th 2015, inviting researchers in the field as well as LGBT representatives to get a clear picture of the science behind PrEP and its possible social implications.

The science of PrEP

The idea of using ARVs as PrEP is not a new one. Researchers have been looking into this for about a decade, using cohorts consisting of men who have sex with men (MSM), HIV discordant couples (both heterosexual and homosexual, where one partner is HIV positive) and intravenous drug users and women. All these study results have the same overwhelming message: that HIV negative people who take AVRs are largely protected from contracting the virus.

Just how effective is PrEP? Several studies have shown a figure of 86 percent efficacy. However, compared to birth control, where prevention is close to 99 percent, is this effective enough?

The panelists responded to this question by saying that most of the people who contracted HIV during the controlled studies had actually not taken all the pills. They maintained that PrEP could be close to 100 percent effective if the participants take the pills on schedule. Simply put, if PrEP is used consistently, it could make a very real difference to slowing down the course of the HIV epidemic, especially when used in conjunction with condom use and reductions in risky sexual behavior.

Is PrEP effective in other risk groups besides MSM?

PrEP has been shown to be effective in women as well as in intravenous drug users. Socially of course, the people in these risk groups are different and face different types of challenges, which will also need to be addressed in the future.

Availability of PrEP in Europe

Truvada has been licensed as PrEP in the United States, and has been available for this purpose since 2012. In Europe, studies are still taking place to determine the social acceptance and implications of the drug. For example, in France and the UK, PrEP was highly effective in preventing new infections in MSM. Another study, the Amsterdam PrEP (AMPrEP) project, has been announced recently.  Conducted by the Public Health Service in Amsterdam (GGD), AMPreP is part of the HIV Transmission Elimination Amsterdam (H-TEAM) project, aimed at reducing the incidence of new HIV infections in Amsterdam by a combination of various approaches, including PreP.

So why is PrEP not available in Europe? When I asked Gilead representatives about this, I learned that in the US, the Food and Drug Administration (FDA)had specifically requested Gilead to license Truvada to be used as PrEP. However, according to Gilead, no such request had been received by them from the European Medicines Agency (EMA), and this means that they have not registered Truvada for PrEP in Europe. Hence, PrEP cannot be used in Europe.

During the panel discussion, Drs. Elske Hoornenborg (GGD, Amsterdam) said that she feels the responsibility of licensing PrEP in Europe lies with Gilead. Jörgen Moorlag, Coordinator of Poz & Proud, said that he is missing the sense of urgency to call for PrEP licensing within the community in the Netherlands as well as the rest of Europe.

Dr. Frank Pistoor, Senior Medical Scientist for HIV at Gilead, was unable to participate in the panel but provided the following statement:

Gilead is committed to developing strategies that prevent the transmission of HIV and continues to support ongoing research and demonstration projects (such as the demonstration project in Amsterdam) to evaluate the effectiveness of Truvada for a PrEP indication in real-world settings. Gilead is now engaged in dialogue with the European Medicines Agency (EMA) regarding a regulatory filing for Truvada for PrEP.  The discussions come in response to support from the EMA, as well as interest from the clinical and HIV communities, with the aim of reducing the risk of sexually acquired HIV infection and the number of HIV infections.

How expensive is PrEP and who will pay for it?

Dr. Adrie Heijnen, a general practitioner and sexologist, wrote an opinion piece in the Nederlandse Tijdschrift voor Geneeskunde in 2013 highlighting several issues with the usage of PrEP, one of which is the high cost: up to €7,000 per year per person if taken daily. In the US, there are schemes in place that allows reimbursement for PrEP by insurance companies. In addition, Gilead has programs to help both the insured and uninsured get access to PrEP. In Europe, Prof. Peter Reiss (AMC) pointed out that each country has its own regulations for reimbursement, so this will have to be taken up by individual countries once the drug is licensed by the EMA.

The question remains, as Dr. Heijnen asked in his editorial: Is the cost worth it? Will insurance companies be happy to reimburse these costs, especially when other prophylaxes, like malaria, are not covered? Specifically in the Netherlands, where reimbursements are financed by the taxpayer, why should the man on the street have to pay for someone else’s behavior? It must be noted, however, that treating patients with HIV/AIDS can range anywhere from €10,000 to €20,000 a year, and so the cost of PrEP could clearly offset the high cost of treating people with HIV/AIDS during their lifetime. A paper published the use of PrEP in Canada also concluded that it is more cost-saving to prevent new infections rather than treat them.

Will the availability of PrEP encourage unsafe sexual behavior among high risk groups?

As with the accessibility of the birth control pill and HPV vaccine, negative reactions to PrEP will definitely surface, predominantly the assumption that it will lead to higher levels of promiscuity in a community that is already considered on the margins of society by some. Shaming has occurred even within the gay community; in the early days of use in the US, men on PrEP were initially stigmatized by their peers, being called “Truvada whore” and worse in the US.

The panelists remained positive on this point. Peter Hayward, Editor of The Lancet HIV, said risky sexual behavior is already on the rise worldwide, and this is a problem that has to be addressed in society, with or without prophylaxes. Further, various studies (hereand here ) showed that MSM (men who have sex with men) did not have more partners during the course of the particular study. Another 2008 study suggested the same, with participants receiving counseling during the trial period. Quite possibly, the welcome side effect of being in such a trial is higher personal vigilance in sexual behavior.

However, this discussion is valid only if one actually has autonomy over one’s own body. Being on PrEP creates empowerment in a situation where a partner cannot be fully trusted, for example, giving the ability to protect oneself against HIV. Also, in countries where violence against women is prevalent, when consent is immaterial, PrEP could make the difference between life and death, which makes access to it even more critical.

Science has shown that PrEP works very effectively to prevent new HIV infections. However, where the science ends, the social work begins, which is critical in ensuring success. Doctors will need guidelines to identify the groups that will benefit the most from PrEP. More importantly, people who are at risk (those who don’t always use condoms but who want to take responsibility for their own health and that of others) should identify themselves to their doctors, and every effort should be made to ensure that a safe, stigma-free environment is created for them. Follow-up appointments for people on PrEP are necessary to make sure they are using the medication on schedule and that they have access to condoms and also advice on safer sexual behavior. Education, advertising and awareness about PrEP are essential.

The bottom line is that PrEP works if it is used consistently. With appropriate social and financial support, PrEP could have far-reaching effects in slow down this epidemic. And it could even play a significant role in conquering HIV/AIDS in some populations – not with a cure or a vaccine as such, but with social awareness, acceptance and support from society.

Dr. Sheba Agarwal-Jans (@ShebaAJ) holds a PhD in Molecular Biology and Genetics from Erasmus Medical Centre in Rotterdam, the Netherlands. She worked as a postdoctoral fellow at the Vrije Universiteit Medical Centre in Amsterdam before joining Elsevier in 2008. She is the Publisher for the Microbiology portfolio of journals and is based in Amsterdam.