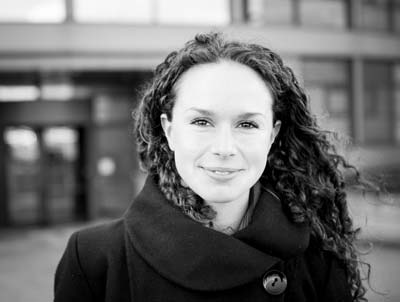 Dr. Kate Shaw is a particle physicist at the International Center for Theoretical Physics (ICTP) in Trieste, Italy. Recently, she and freelance photographer Jack Owen of London embarked on a photo essay project to capture the lives of women in physics in the Palestinian territories. 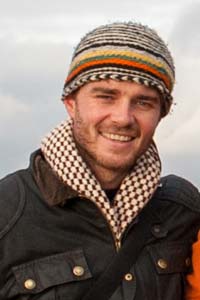 The essay was recently exhibited at the WISRNet Women in Science Conference at the Royal Society in London, and it will be displayed at the 37th International Conference on High Energy Physics (ICHEP) in Valencia, Spain, in July. The Elsevier Foundation supported the printing mounting and transport of the photo exhibit. Foundation Program Director Ylann Schemm said, "Recognition for research is crucial for early career scientists, and even more so for women scientists working in developing countries with few role models and resources."

"It's is very interesting to understand the situation of women in physics in this part of the world," said Dr. Charon Duermeijer, Publishing Director and Head of Elsevier Physics Journals, whose PhD is in geophysics. "I find it greatly encouraging and certainly hope that these women will be seen as role models for physics worldwide."

Here, Dr. Shaw writes about the experience and what she learned.[divider]

In November, a photographer and I set out to capture the lives of seven women studying and working in physics in Palestine.

The interest arose from my work over the last few years in Palestine and elsewhere in the Arab world, where I have organized particle physics workshops and seminars. Each time, I was joyfully surprised to be standing in front of an audience full of women.

It is a known phenomenon in the Arab world that the number of women studying physics surpasses that of men, and in Palestine, I saw this most pronounced. However, the number dramatically drops at the faculty level. I wanted to know why there was this reverse gender gap for students, what issues affected women wanting to pursue a career in physics, and how these compared to the issues in the West.

I work for the International Center for Theoretical Physics (ICTP), and their mandate, in part, is to foster physics in developing countries. In September 2013, I went to l live in the West Bank for six months to teach a master's degree course in particle physics at Birzeit University with Dr. Bobby Acharya, a fellow researcher from ICTP. I got in contact with Jack Owen, a freelance photographer who was at the time working in Kenya on development projects. 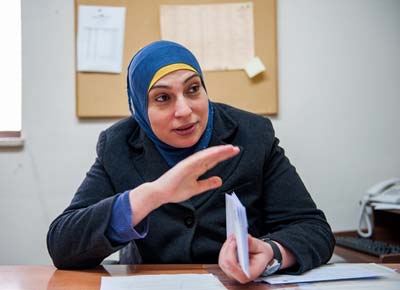 In November, Jack joined us in the West Bank, and we set out to understand and capture aspects of these women's lives as Palestinian women and as physicists. We wanted to explore the demands of societal norms and the effects of gender bias. We focused on six of the master's students and the only female faculty member and chair of the department, Dr. Wafaa Khater. We decided to create a photo essay to communicate this work, combining photographs of the women's lives alongside their own words, from interviews and conversations we had, allowing them to tell their own story.

"I was excited at the opportunity to work in a part of the world I have long been interested in," Jack recalled. "Yet I was apprehensive about how it would go."

"To get the kind of intimate photographs I wanted – as a foreigner with a large camera around my neck – was not an easy task. I was taking photos in the West Bank for a month, and it took me about half that time to develop sufficient rapport with the women for my photography to take off."

Jack spent his days in the physics department, photographing Dr. Wafaa at work, and the master's students studying and teaching in the labs. He also found the aesthetic a challenge; physics laboratories are not always an especially inspiring place.

"Over time, I started to think in terms of the opportunity the spaces offered as opposed to the inherent constraints, and things started to click," he said. "Photographs of the women working through difficult physics problems on the chalkboard and working with students in the lab began to take form to tell this story." [pullquote align="left"]"I think physics is the mother of all sciences." — Doa Hawamdeh, Berzeit University[/pullquote]We traveled a lot during the project, to places such as Hebron, Nablus, Bethlehem, and Ramallah, and even into Jordan. Often, we were warmly invited into the homes of the women. We met their families and discussed the various issues in their lives and the role of women, over deliciously cooked Palestinian cuisine, all the time learning new words and phrases in Arabic. There was always a lot of love and support from their families when discussing their career aspirations. Some of the challenges the women face were not easy, both societal and political, but the women's strength and hopes for the future are inspirational, lending to an increasing number of women embarking on careers in physics.

One of the key facts I learned as to why many women study physics in Palestine is there is not the stigma that physics is seen as being a masculine subject, which is prevalent in the west.A student named Suhad talked about this issue with us over coffee one morning in the department:

I don't know why you say physics is only for men, because here in our university in the science as a whole, many students are women, not men. For example in undergraduate we were 18 girls and only three boys. So with respect to me, it is not strange to be a female scientist.

The full photo essay is on the ICTP website: "Women in Physics in the Palestinian Territories."

The important lesson I learned is that in a culture where the idea of physics being a masculine subject is unknown, women will flood into physics. It clarifies for me the work we must do in the west to break down these old ideas.

The fact is, it's shameful that in the West we still see so few women studying and pursuing a career in physics when there is such opportunity. This thought was expressed by another student, Tasneem. "I can see that in the West there are a lot of facilities for anyone to study," she said. "And here, we have really a lot of challenges to do that. I am really surprised that there are so many facilities to do science but there are so few women."

Science will play a key role to overcome the many challenges the world faces, and we must support scientists in developing countries where these challenges need addressing most urgently. It is well understood that empowering women to fulfill their potential in science will greatly support the sustainable development of their countries. By not providing them opportunities and not supporting this pool of well-educated and motivated women science, we lose terrific brainpower – not just to assist in sustainable development but to gain a greater understanding of our universe.

Working with partners such as ICTP, the Elsevier Foundation and the Organization for Women in Science for the Developing World (OWSD) was inspirational. They provide support, training programs, fellowships and awards for women to fulfill their potential in science, and more must be done to harvest this brainpower or science will be the loser.

Nominations are being accepted for the 2015 Elsevier Foundation Awards for Early-Career Researchers in Developing Countries This year's awards are for women in physics and mathematics.

Dr. Kate Shaw (@KateShawOnline) obtained her PhD in experimental particle physics from the University of Sheffield in 2010. She is now a post-doctoral fellow at the Abdus Salam International Centre for Theoretical Physics (ICTP) in Italy, where she works on the ATLAS Experiment at the Large Hadron Collider (LHC). Kate has a strong interest in supporting physics in developing countries; she runs the ICTP Physics Without Frontiers program, is an ICTP Ambassador and is engaged in promoting women in physics.

Jack Owen is a freelance photographer based in London. He writes:

Photography provides us with a way of seeing that encourages us to observe and to imagine, and at it's best it helps us empathise. I see the still image as a tool that allows us the privilege of slowing down, of considering the world around us with fresh eyes.

I'm interested in taking photographs that are both aesthetic and useful. For me the opportunity to work with other people is what makes photography the wonderful medium it is, and I hope that my photography shows something of the people that I've had the pleasure to take photographs with.