Nearly 200,000 people have registered for an ORCID, and organizations worldwide are integrating the academic identifiers into their systems

Mike Taylor(@herrison) has worked at Elsevier for 17 years, the past four as a technology research specialist for the Elsevier Labs group. In that role, he has been involved with the ORCID Registry and was one of the original architects. His other research interests include altmetrics, contributorship and author networks. Details of his research work can be found on the Elsevier Labs website and on ORCID:http://ORCID.org/0000-0002-8534-5985. He is based in Oxford.[divider]

Since its launch in October, ORCID.org — the Open Researcher and Contributors ID repository — has issued nearly 200,000 unique digital identifiers to researchers and scholars from around the world, and universities, professional associations, libraries, publishers and funding agencies are adopting and integrating the unique academic identifiers into their systems. It's a truly international project, and you can witness its global reach by visiting www.ORCIDlive.org, which shows near real-time changes being made to ORCID profiles.[caption id="attachment_26017" align="alignleft" width="480"] 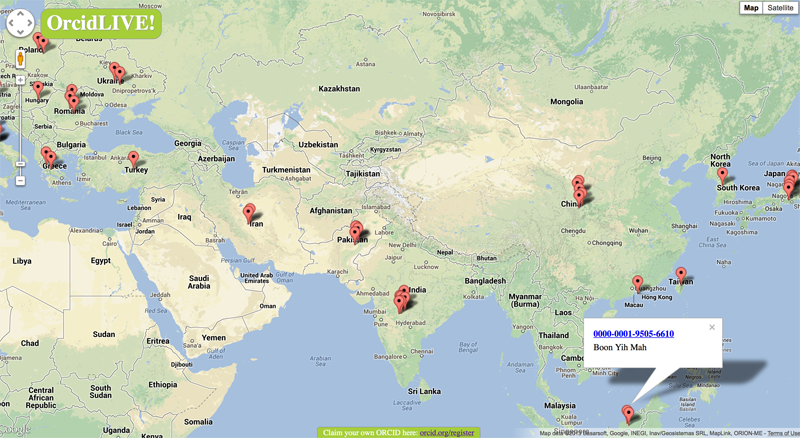 An international project: each label on ORCIDlive.org represents a recently updated ORCID where we know the user's location, and for people with public profiles (only 20 percent of users indicate their country). This screenshot shows activity in Taiwan, Malaysia, South Korea, India, Pakistan, China and Iran.[/caption]

Nearly a third of users have attached their articles to their profiles, making it a useful database of scholarly identity and work. Elsevier has played a significant role in ORCID's growth: our Scopus2ORCID application has helped over 25,000 researchers create their ORCIDs, and between them, they've exported nearly 1.2 million article records. Access to Scopus is not needed to use this application.[caption id="attachment_26019" align="alignleft" width="480"] 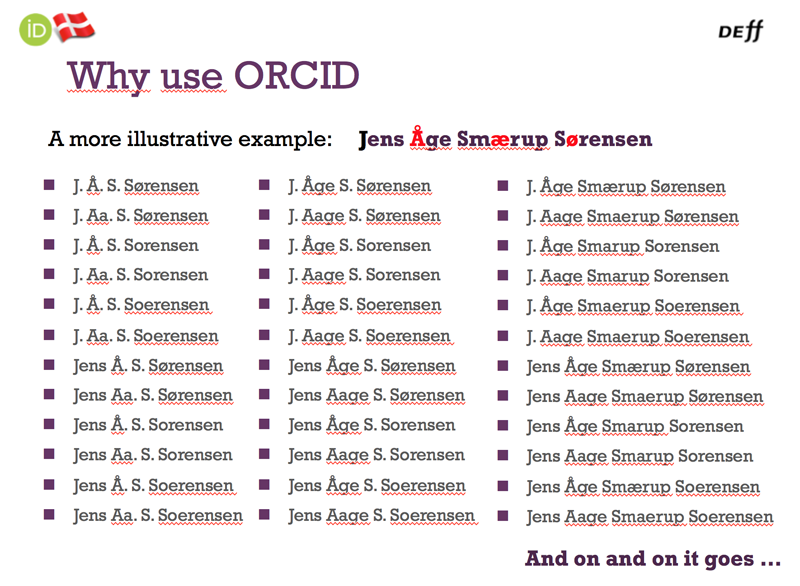 The 36 faces of Jens Åge Smærup Sørensen: dipthongs, accents, contractions and transliterations produce dozens of variations in a hypothetical name. By claiming a unique ORCID, researchers can avoid fragmentation of identity and identity ambiguity. (Slide by Mogens Sandfær of DEFF)[/caption]

It hasn't been an entirely smooth journey. When ORCID was launched, there were a number of critics on social networks. The site occasionally ran very slowly due to the unexpected demand, and some people were frustrated by the lack of certain features.

Fortunately, the technical team was able to increase performance and add features by using a very aggressive release cycle. In addition, the organization has delivered on its promise to open-source the computer code. It is now available to all under the MIT license and may be downloaded from Github. (The team has already received its first proposed extension to ORCID functionality, as written by a community programmer).

The ORCID technology team, led by ORCID Technical Director Laura Paglione, has introduced numerous new features since launch. Although some much-requested improvements (for example, the ability to include patents and affiliations) aren't scheduled for release until later this year, recent releases have included important upgrades such as better privacy management controls, multiple email logins, user-interface improvements, refinements to the search engine accuracy and performance, and extensions to the API functionality – including support for webhooks, which allow for near real-time notification of changes to ORCID data.

The new CrossRef search and import integration has provided an excellent additional method for adding documents to ORCID profiles. Many other sites have developed ORCID-specific features — in particular, DataCite, Figshare and ResearcherID – and ImpactStory.org allows you to use your ORCID to view altmetric data for your articles.At Elsevier, we've been continuing to implement ORCID into our systems. As you can imagine, we have many systems to change, but we anticipate that ORCID will be ubiquitous across our systems within the year.

Integration with the Elsevier Editorial System

Our biggest release this year is just hitting the internet. Our submission system for new articles – theElsevier Editorial System (EES)– allows authors to associate ORCIDs with their Elsevier accounts. Our trials have been very encouraging, with 20 percent of authors associating ORCIDs with their account, 72 percent ­of whom have created an ORCID for the purpose (Graph 1). Further changes are planned for the coming months, including the ability to capture ORCIDs of co-authors. This project is led by Getty Bruens, Application Manager for EES;

Philip Hibberd; Principal Project Manager for Elsevier IT; and IT contractorRam Baskaravelu

and his development team.

On Scopus, where we've been able to display ORCIDs next to papers since the beginning of the year, we're just about to launch a new feature that will show extra data accessed from the ORCID database on both paper and author pages.

How to get involved

ORCID is an open community organization – the "O" in ORCID stands for open – and as such, it's an organization that welcomescommunity engagement.As well as making the code available for re-use under the MIT license, the public data records themselves will be available for download from the website in October. You can play a part in ORCID's development by making suggestions, getting information and voting on changes at

http://support.ORCID.org. Anyone can login and can view latest technical developments on the publicTrello Board

. And anyone can build applications with public data using ORCID'sopen APIs.

If you're not interested in the technical aspects, ORCID is developing its outreach program and is recruiting volunteers to act as local ambassadors.Meanwhile, organizations can help support ORCID financially by becoming members. [/note][divider] 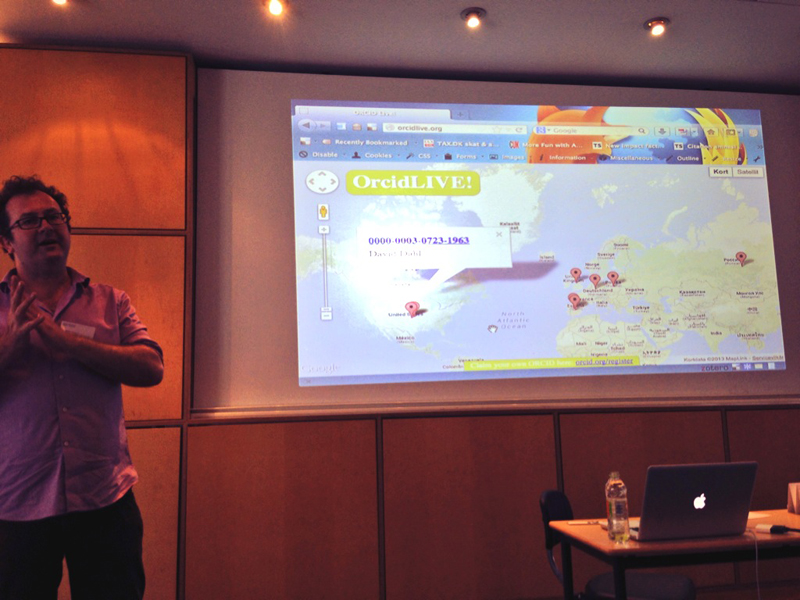 Mike Taylor speaks at the ORCID seminar and roundtable for stakeholders in Denmark,sponsored by DEFF, Denmark's government funded electronic research library. Here is alink to his presentation

Denmark has a highly developed infrastructure of Current Research Information Systems (CRIS) based on Pure, an application developed by Atira, a Danish company that was recently acquired by Elsevier. All aspects of their CRIS are connected to a national portal and the national research assessment scheme. A unique identifier system such as ORCID could be a valuable asset to DEFF as they build infrastructure connections to the rest of the world.

Mike Taylor, Technology Research Specialist for Elsevier Labs, recently spoke at the ORCID seminar and roundtable for stakeholders in Denmark, sponsored by DEFF, Denmark's government funded electronic research library. The project was organized to establish a strategy for a national implementation of ORCID in Denmark. Here is a link to his presentation.[divider]

ORCID(the Open Researcher and Contributors ID repository) is an open, nonprofit, community-based effort to create and maintain a registry of unique researcher identifiers and a transparent method of linking research activities and outputs to these identifiers. Researchers can register for a unique ID, which can be used by editors, funding agencies, publishers and institutions to reliably identify individuals in the same way that ISBNs and DOIs identify books and articles.

To register, researchers should visit the ORCID website, orcid.org, where they can create a complete online record of their research and publications. This ORCID can be used as a linking identifier throughout the entire chain of the scholarly communication process to allow reliable attribution of research.