Named a “Woman Worth Watching,” she reflects on a career that has encompassed Robert Redford, Italy, and clinical workflow solutions 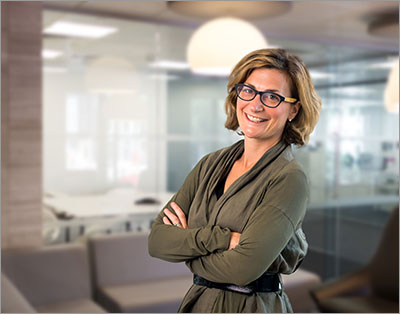 When someone wins an award celebrating their achievements as a leading executive, it can be tempting to assume that their success is down to clear-sighted ambition and meticulous career planning. But that was not the case for Diane Bartoli, Senior VP of Clinical Reference & Workflow and one of  the driving forces in shaping Elsevier's "clinical insight engine" ClinicalKey.

Recently hailed as one of 11 "Women Worth Watching" in the Profiles in Diversity Journal September/October issue, Bartoli reflected on a career that has encompassed novelist Maeve Binchy, journals marketing, Wall Street business school and Robert Redford.

Her advice: sometimes it pays to abandon the plan and go with your gut.

"One of the best things I ever did was quit my job to pursue a dream with no real plan for how I was going to re-enter the workforce," she said. "I learned a tremendous amount about myself – that I could leap and create my own net."

That moment came after working as an editorial assistant for Dell Publishing, which would later become part of trade publishing giant Random House. A love of books had driven her to work in publishing, but after three years, she started to get restless. "The only thing I knew I wanted to do was go  to Italy and learn to speak Italian," she recalled, "but I couldn't afford to just quit my job and go."

Instead, the Rotary Foundation provided a solution – an Ambassadorial Scholarship from the Rotary Club of Chester, New Jersey, that would take her to Italy for eight months. It was a chance to learn the language, but once the eight months was up, the  future was uncertain.

"I had no idea what I would be going back to," she said. "I just figured I'd look for a new job when I got back."

"Figuring it out" has become something of a career-specialty for Bartoli. Her current role with ClinicalKey in Philadelphia has involved working out how to bring the most authoritative and relevant information to clinicians at the point of care – and how to bring the product to market. It's an  ability that first took shape when, on her return to the US, she was invited by the managing editor at Dell to rejoin as Associate Editor.

"I got to work with some very famous authors," she said, mentioning Maeve  Binchy and Al Franken, the comedian who is now a US senator. "When the Horse Whisperer movie came out, I was asked to lead a book project with Robert Redford chronicling the making of the movie.  It was a great job for all kinds of exposure, and helped me establish a reputation as someone who could just work things out."

But it was thebusiness's approach to financial projections that propelled Bartoli onto the nextstage of her career. She described plugging numbers into the purchasing model,looking for the magic "15 percent" outcome that dictated whether abook would be worth publishing. "It was an approach that relied heavily onthe institutional knowledge and gut of the editorial leadership, but to me itfelt like we were making it up as we went along with very little grounding inmarket facts."

Finding a unique skill in the world of business — and Elsevier

That experience provided the motivation for a stint at the famously Wall Street-oriented NYU Stern Business School, revealing a skill she'd previously taken for granted. "I majored in finance at Stern, which was intimidating given the student body which drew heavily from Wall Street. While I was editing books, they had been building valuation models.  But what I found was that while other people there could put together brilliant finance models, they couldn't necessarily always communicate it well. And I realized that that was my hook, my unique strength."

While there, Bartoli worked for the business strategy consultancy Price Waterhouse Coopers in their Information, Communication and Entertainment practice, where she was mentored by Sebastian Vos, now Managing Director of Education for Health Sciences at Elsevier. She'd planned to work for PWC after graduation, but that was delayed when the tech bubble burst in 2002. Vos moved to Reed Elsevier and saw  the opportunity to bring Bartoli on board as a strategy manager.

"One thing I've really benefited from at Elsevier is that when they find someone they believe in, they'll do their best to keep you engaged," she said.

When she left to help a friend launch a literary agency, a role that provided the flexibility she wanted as she started a family, Elsevier continued to offer part-time project work.

"After I had my second child, I got a call from Elsevier," Bartoli said. The then-CEO of the Health Sciences division was interested to know what she was up to and to measure her interest in coming back to the fold.

Spotting a gap in the market

ClinicalKey is a search engine thatsupports clinical decisions by making it easier for healthcare professionals,faculty and students to find and apply relevant knowledge. When a user submitsa query, ClinicalKey draws answers from Elsevier's database of medical andsurgical content, along with select third-party content. Its "smart search" technologyallows the most clinically relevant results to be presented because all of thecontent has been has been tagged using Elsevier's proprietary medical taxonomy,enabling it to go beyond keyword searches to understand clinical terms and therelationship between them.

Five months later, she was working on some post-acquisitions projects that eventually led to her spotting a gap in the market. It was for a clinical solution that put comprehensive research at the fingertips of health practitioners in the same way ScienceDirect did for researchers. That idea would go on to become ClinicalKey, one of Elsevier's biggest product launches of recent years, with hundreds of thousands of content sources and some of the most prestigious medical facilities in the world as clients.  Managing such a product must have seemed like a world away from the experience of working on books with Robert Redford.

"When I was working as a strategy manager, I struggled a little," Bartoli admitted. "I got into publishing because I loved books, and yet I was working in a place where I barely understood half of what we published." In the end, she said, it was working in product management that made everything click.

"I realize that I had skills that were useful to a researcher, to a clinician who's trying to crack the nut on a cancer patient even though he's followed all the protocols," she explained. "I have the skills that can help design a solution that can get a doctor to the right answer, and that's tremendously  exciting."

Bartoli described how spending time with customers was a surefire way of providing motivation, even when dealing with the most frustrating elements of working life. Before the launch of the Japanese edition of ClinicalKey, she spent some time visiting the people in Tokyo who were using the global edition.  One was a clinician and researcher who was treating patients with Alzheimer's and doing research on effective treatments.

"He described how he used ClinicalKey to help those patients, and how he used ScienceDirect to power his research," she said. "It was incredibly motivating – I came away thinking 'OK, if I do nothing else, the fact that we're helping this man do this kind of work is enormously satisfying.'"

Ian Evans is Communications Business Partner at Elsevier, based in Oxford. He joined Elsevier two years ago from a small trade publisher specializing in popular science and literary fiction.  Prior to this he worked for several years on a leading trade magazine for the electrical retail industry, reporting on new technologies and market trends in consumer electronics. He holds a degree in English literature from the University of Wales,  Cardiff, and spends his spare time reading, writing, and playing drums.