Nurses unite on The View

In response to disparaging comments on the TV show, nurses will "show their stethoscopes" and the true work of the nursing profession 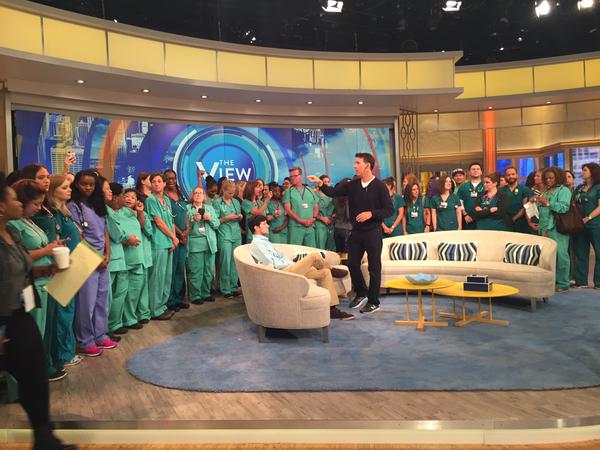 Dozens of nurses from the New York are converging on the set of the ABC TV talk show The View today in response to a controversy kicked up by the show's hosts earlier this week. The live show will air at 11 am EDT today.

Among the many nurses invited onto the show is Larry Z. Slater, PhD, RN, CCRN (@LZSlater), Clinical Assistant Professor in the NYU College of Nursing.

The View host Joy Behar and another host made comments critical of Miss Colorado Kelley Johnson, the second runner-up in the Miss America pageant. Johnson, a nurse, chose for her talent to do a monologue about her job. She wore scrubs and a stethoscope. Behar actually said, "Why is she wearing a doctor's stethoscope?!" Behar has since apologized for her comments.

Dr. Slater is well known to Elsevier because he is also a nurse scholar in the Nurse Faculty Leadership Academy (NFLA), a two-year leadership program sponsored by the Elsevier Foundation and run by Sigma Theta Tau International (STTI), the nursing honor society.

In excited emails to colleagues and the NFLA, Dr. Slater said the NFLA had helped prepare him for such moments of leadership.

Meanwhile, angry nurses from around the world have taken to social media over the last few days, scorching the hosts as being ignorant of what nurses really do.

In addition, media have reported that The View has lost some key sponsors, including Johnson & Johnson.