Findings, published in Cell, suggest that new neurons are born daily in hippocampus and may support cognitive functions in adulthood

The birth of new neurons in the adult brain sharpens memory in rodents, but whether the same holds true for humans has long been debated. A study published in the journal Cell by Elsevier's Cell Press today reveals that a significant number of new neurons in the hippocampus — a brain region crucial for memory and learning — are generated in adult humans.

The researchers used a unique strategy based on the amount of carbon-14 found in humans as a result of above-ground nuclear testing more than half a century ago. The findings suggest that new neurons are born daily in the human hippocampus, offering the tantalizing possibility that they may support cognitive functions in adulthood.

“It was thought for a long time that we are born with a certain number of neurons, and that it is not possible to get new neurons after birth,” says senior study author Dr. Jonas Frisén of the Karolinska Institute in Sweden. “We provide the first evidence that there is substantial neurogenesis in the human hippocampus throughout life, suggesting that the new neurons may contribute to human brain function.” 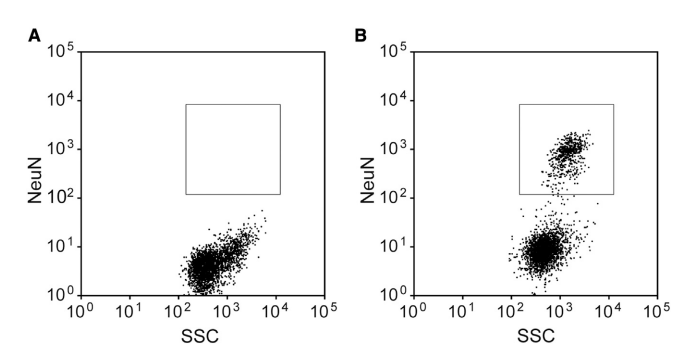 Isolation of Neuronal and Nonneuronal Nuclei from the Human Hippocampus. Cell nuclei were isolated from the human postmortem hippocampus and incubated with an isotype control antibody (A) or an antibody against the neuron-speciﬁc epitope (NeuN) (B), and the neuronal and nonneural populations were isolated by ﬂow cytometry. The sorting gate for neuronal nuclei is indicated. (Source: "Dynamics of Hippocampal Neurogenesis in Adult Humans," Jonas Frisén et al, Cell)

Due to technical limitations, until now it was not possible to quantify the amount of neurogenesis in humans. To overcome this hurdle, Frisén and his team developed an innovative method for dating the birth of neurons. This strategy takes advantage of the elevated atmospheric levels of carbon-14, a nonradioactive form of carbon, caused by above-ground nuclear bomb testing more than 50 years ago.

Since the 1963 nuclear test ban treaty, atmospheric levels of ”heavy” carbon-14 have declined at a known rate. When we eat plants or animal products, we absorb both normal and heavy carbon at the atmospheric ratios present at that time, and the exact atmospheric concentration at any point in time is stamped into DNA every time a new neuron is born. Thus, neurons can be ”carbon dated” in a similar way to that used by archeologists.

By measuring the carbon-14 concentration in DNA from hippocampal neurons of deceased humans, the researchers found that more than one-third of these cells are regularly renewed throughout life. About 1,400 new neurons are added each day during adulthood, and this rate declines only modestly with age.

Because hippocampal neurogenesis occurs to a similar extent in adult humans and adult mice, it could also play an important role in human cognition and psychiatric disease. “It has long been suspected that depression is related to reduced hippocampal neurogenesis, and our findings suggest that new and more effective antidepressants could potentially be developed to target this process,” Dr. Frisén says.