Website recognizes talent and contributions made by researchers around the world

Awards play a central role in the research community by recognizing researchers for the valuable contributions they make to the world of discovery. They reward talented individuals and teams for their abilities and commitment, often providing funds to further their research.

Through all of its awards, Elsevier aims to encourage outstanding research practices that benefit society.

Today, we are unveiling a new portal on Elsevier.com to showcase these awards and make them more accessible: Elsevier.com/awards. The site includes a selection of awards along with some of the talented individuals who have received such honors.

Over time, we plan to present all of our awards on this platform, making it one of the largest collections of research awards hosted on one website.

Elsevier’s new Awards portal – Elsevier.com/awards – includes information about many of the awards offered by Elsevier along with information about how to apply or nominate recipients. Many of these awards are made possible by societies and other partnering organizations.

Read about the Awards on Elsevier Connect

Many of the awards and their recipients are featured in theAwards category.[/note]

Awards in the realm of science have developed since the early days of science. The Elzeviers, who operated a publishing house in the Netherlands from 1580 to 1711, presented prize books that were handed out to “best-in-class” pupils for their achievements. It was not until the 18th century, however, that contests were publicized and gold medals presented for the best paper. The oldest science prize, The Copley Medal, was first awarded in 1731 — 170 years before the first Nobel Prize. Since then, its recipients have included Charles Darwin, Albert Einstein and Stephen Hawking.

Elsevier has rewarded hundreds of outstanding academics across the world, and today presents about 300 awards a year with grants ranging from $100 to $25,000. The majority of these awards belong to a journal or society, including best paper awards and awards for research excellence in a field.

Philippe Terheggen, PhD[/caption]“Many of our awards are founded by individual journals together with their corresponding societies”, said Dr. Phillippe Terheggen, Managing Director of STM Journals at Elsevier. “The sheer number is a testimony to the proliferation of research itself and the desire to award those who produce outstanding work. We’re delighted that we can now place these individuals in the spotlight.”

There are also many Scopus awards presented in different countries in collaboration with partners such as the Fulbright Commission (UK), National Academy of Sciences (India), and the National Research Foundation (South Africa). These include awards for researchers in the early stages of their career as well as more senior researchers. The Elsevier Foundation has also developed recognition awards for early-career women scientists in the developing world in partnership with the Academy of Sciences in the Developing World (TWAS) and the Organization for Women in Science for the Developing World.[divider] 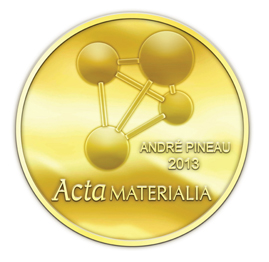 The Acta Materialia 2.5-inch gold-plated medallion[/caption]The Acta Materialia Gold Medal has been awarded annually since 1973 by Acta Materialia Inc . with partial support from Elsevier. Celebrating demonstrated ability and leadership in materials research, it consists of a gold medal, a monetary award and an inscribed certificate.

The Tetrahedron Prize is an annual award that has been handed out since 1980. The prize honors researchers for their creativity and influence in organic and biomedical chemistry. The awardee is nominated and receives a $10,000 cash prize.","sans-serif";>[divider] [caption id="attachment_23369" align="alignleft" width="128"]

Iris Kisjes has worked at Elsevier for seven years, the past four in communications. She is currently Senior Corporate Relations Manager, based in Amsterdam. She has a keen interest in the knowledge economy, especially in relation to the valorization of science and the longevity of the higher education system. [divider]