As a postdoc in particle physics at CERN, the European Organization for Nuclear Physics in Geneva, Dr. Eleonora Presani struggled to find a journal with a remit broad enough for her research.

Just a few months later, when she moved into the world of publishing to become a managing editor at Elsevier, creating such a journal would become her top priority.

“At CERN, I was part of a research team working on a device to detect anti-matter in space that was placed aboard the International Space Station in 2011,” Dr. Presani explained. “That project was an example of the recent collaboration that has developed between two scientific communities — particle physics and cosmology.”

When Dr. Presani joined Elsevier in September 2011, she worked with the Research & Academic Relations team to find out exactly how many articles were being published in these two communities and in which journals.

She discovered that while the number of articles touching on both fields was growing rapidly, one important area was left in the dark. “There was no journal dedicated to publishing a particular subset of astroparticle physics – dark matter and dark energy,” she said. “And I thought there should be.” [note color="#f1f9fc" position="right" width=400 margin=10 align="alignright"]

That research formed the basis of a proposal Dr. Presani presented to the management team of Physical Sciences I, which agreed this gap in the market should be addressed. Better still, in the meantime, Dr. Presani was appointed the publisher of the new journal.

After the editorial board was formed — all experts in their field — the next challenge was to find a journal name that encapsulated the broad remit of the online-only publication they had developed. Dr. Presani, who now holds the title Junior Publisher for High Energy Physics, admits: “I wanted to call it The Dark Universe, but when we Googled it, we discovered there is already a well-known sci-fi novel with that name.”

That led the team to come up with the title: Physics of the Dark Universe.

Plans for the new journal were unveiled at the Identification of Dark Matter Conference in Chicago in July. The event also marked the launch of a new prize linked to the journal: The Dark Universe Award. This will allow the journal to recognize two or three young researchers in the field each year.

What makes the journal unusual?

Dr. Presani believes the journal’s interdisciplinary approach is not its only distinguishing feature.

“The kinds of papers we publish are also a bit different” she said. “If someone has an idea for an experiment, they usually develop a detailed proposal seeking funding for their work. While one aspect of their findings may eventually be published, you rarely see a full summary of that proposal and the work that accompanied it. Alongside the usual research manuscripts, Physics of the Dark Universe is happy to publish these concept papers and design studies, as they can be really useful for other researchers.

“We can even make special issues out of them,” she added. “I’m not aware of any other journal that does that.”

[pullquote align="right"]Our aim is to create a platform where researchers can communicate about every aspect of the research they are working on.[/pullquote]

“If someone has written software to carry out analysis or simulation, they usually have to turn to a more technical journal to get the details published,” she said. “Our aim is to create a platform where researchers can communicate about every aspect of the research they are working on.”

Another area in which the journal hopes to differentiate itself is presentation. Alongside their manuscripts, authors are encouraged to supply complementary material, especially analysis and simulation source codes. Dr. Presani has been working with Elsevier’s Content Innovation team to introduce linking to external databases and identify new ways to support digital research output in cosmology and high-energy astrophysics. 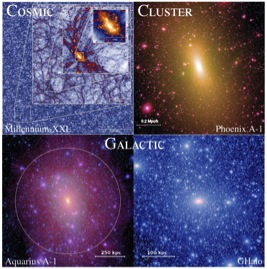 One thing that was never in any doubt was that the journal would be open access; both the particle physics and cosmology communities were early advocates of this model. Now, the team is extending its innovative approach by waiving the fee for authors. The aim is to seek support from funding agencies and universities instead.

“This is a field with limited funding sources and experiments can be extremely expensive,” she explained. “That means funding bodies have to invest a lot of money already, and we are hoping they will see covering these costs as part of that infrastructure.”

‘Next Decade in Dark Matter’

Since the journal’s launch in November, the focus has been on building up submissions and readership. However, the team also has also been focusing on the future. “You can even see that from the title of our first edition,”Dr. Presani said. Titled

Next Decade in Dark Matter and Dark Energy, it features researchers’ thoughts on what the next 10 years may hold.

The next issue of Physics of the Dark Universe, which will be published quarterly, is scheduled for spring. [divider]

As Academic Content & Communications Manager for Elsevier, Linda Willems oversees the Editors' Update website, a resource center designed to keep editors in touch with the latest developments in journal publishing, policies and initiatives. The site also hosts the quarterly Editors' Update newsletter, for which she is Editor-in-Chief. Willems, who is based in Amsterdam, is also on the team behind the Elsevier Journal Editors' Conferences program. Held five times a year around the world, these conferences give Elsevier's senior editors an opportunity to meet their peers and share ideas. In addition, Willems is responsible for generating content for several other Elsevier communication channels.
comments powered by Disqus