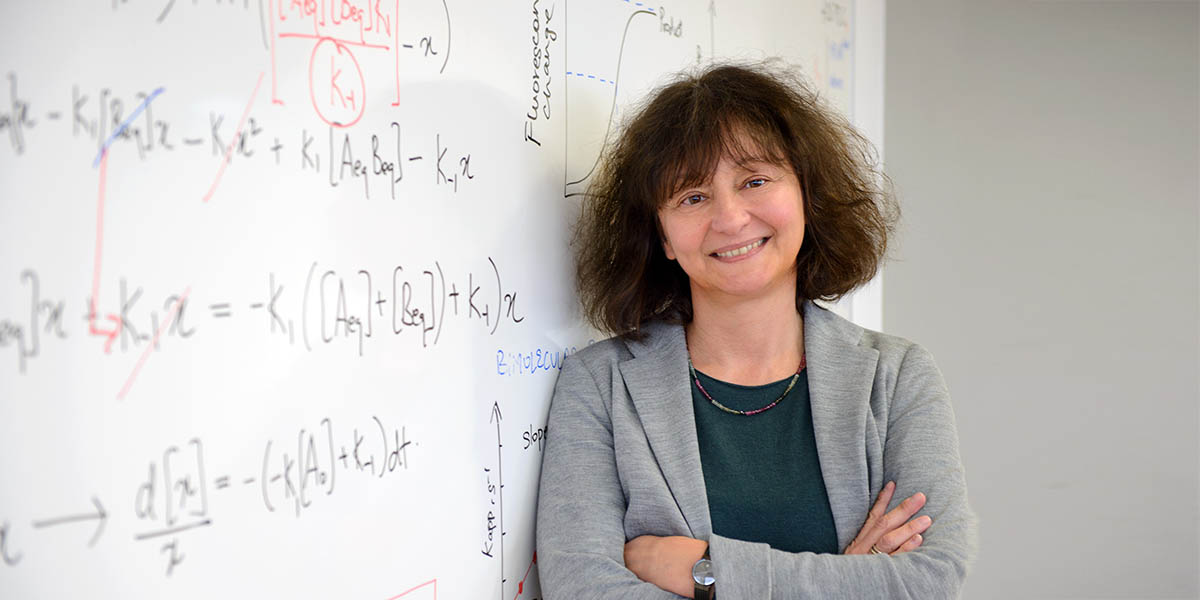 Prof. Marina Rodnina is a Director at the Max Planck Institute for Biophysical Chemistry in Göttingen. Her research focuses on the workings of ribosomes, the so-called “protein producing factories” of cells, which are responsible for translating genetic information into complex chains of amino acids. It has contributed to the discovery of a complex selection mechanism that helps to minimize mistakes in protein biosynthesis. The findings of her research can be applied to the development of new antimicrobials.

As the winner of the 2019 Otto Warburg Medal, Prof. Rodnina accepted the award in a ceremony today at the Fall Conference of the German Society for Biochemistry and Molecular Biology (GBM) and the German Society for Cell Biology (DGZ) at the Eberhard Karls University Tübingen in Germany. The theme of the event is “Age-related Human Diseases – Special Focus Autophagy.” 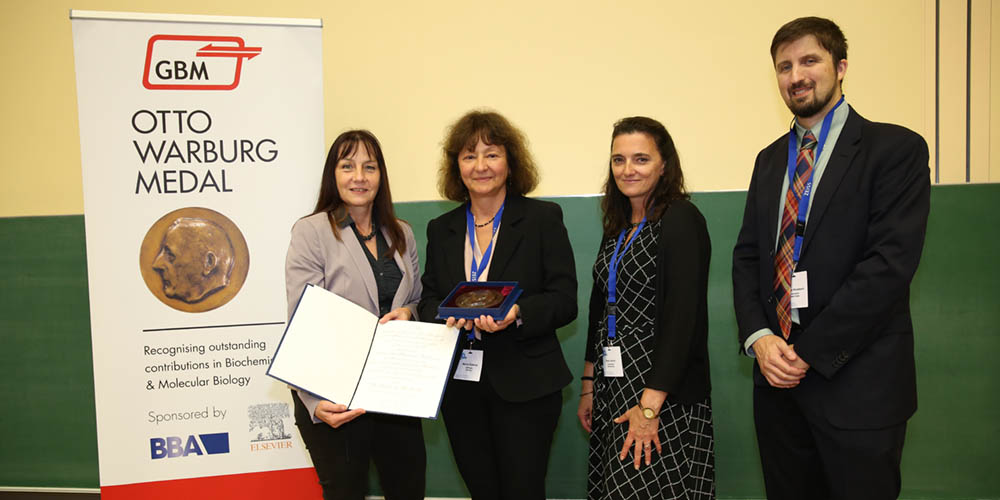 Before the event, Elsevier’s Petra Ullrich talked with Prof. Rodnina about the importance of her research, challenges and opportunities in ribosome research and why it’s crucial to support early-career women in STEM. Their conversation has been translated and edited for brevity and clarity.

Congratulations on receiving the Otto Warburg Medal. You and your team have done important groundwork enabling research in understanding the function of ribosomes even though the ribosome has an extraordinarily complicated structure. It perhaps seems like a mountain that’s too high to climb. What attracted you to research in this field?

I have been working on ribosomes since my PhD. For me, the field remains exciting for three reasons.

First, as the last step of gene expression, translation determines the repertoire and the quality of the proteins in the cell, which is important for the cell viability and fitness. Failure to produce proteins correctly leads to diseases, including neurodegenerative diseases and cancer, and it is important to understand the molecular origin of these diseases to develop therapies. On the other hand, the ribosome is a target for many antibiotics that are actively used in clinics. Given the emerging resistances against antibiotics, it is extremely important to find new antimicrobials, and this is only possible if we understand the work of the ribosome in detail.

The second reason is that the ribosome is an ancient molecular machine built of RNA and proteins. The ribosome allows us to study fundamental questions in molecular biology, such as recognition, substrate selection and catalysis of chemical reactions. In contrast to what modern proteins do, the ribosome uses RNA to fulfill its functions. This provides an insight into the ancient RNA world that presumably preceded our modern protein-dominated life.

Finally, I was always driven by the idea to reconstitute essential biological processes in the test tube and understand them from the first principles. In the last decades, we and others in the field developed approaches to study translation by quantitative methods, which revealed how the ribosomes work and ensure that proteins are synthesized in the right time and place and practically without mistakes.

What does your research in the near future look like? What plans do you have?

Our major plan is to further develop our quantitative methods to study protein synthesis and translation regulation in human cells. Reconstituting the human translation system is rather challenging simply because so many players are involved, and their function is controlled by complex regulatory networks. The field of eukaryotic translation is currently on the verge of a major breakthrough, and one key realization is that the speed at which the ribosome moves along the mRNA may dictate the fate of the protein, such as its sequence, completeness, folding and stability. This is like a code within the code – that is, signals that are encoded in the mRNA beyond the codon triplets – and deciphering this second-order code is one of the exciting avenues to follow.

You are the first researcher to visualize the activity of a ribosome with the help of a 3D cryo-electron microscope. What are the advantages of such a visualization in comparison to traditional research methodologies on ribosomes?

Modern cryo-EM is ideally suited for determining structures of large dynamic macromolecular complexes. Due to the recent technical developments, the resolution of these structures is very high and the unique advantage is the ability to work at conditions where the macromolecules are active, rather than at the restrictive conditions needed for crystallization, for example. Cryo-EM studies also allow us to take snapshots of reactions in time and to reconstitute the trajectories of movement.

Our lab is strong in providing the biochemical samples for cryo-EM studies. We have a long-standing collaboration with Holger Stark at the MPI for Biophysical Chemistry in Göttingen. This productive collaboration yielded the first structure of a translation factor on the ribosome and the first movie of how the tRNAs move within the ribosome. We also collaborate with the cryo-EM labs of Daniel Wilson at the University of Hamburg on many aspects of translation and with Mikel Valle and Xabier Agirrezabala in Spain on translational recoding. The combination of biochemical and biophysical studies is incredibly powerful in solving mechanisms of these complex reactions.

Do you have high hopes that your research will lead to the development of new antimicrobials that can combat major infectious diseases?

We do work on such compounds and, in fact, plan to strengthen this part of our research in the future. Given that the industry continues to close its antimicrobial research programs, there is nothing left but to take over this essential research by the academic sector. Given our expertise in understanding how antibiotics work, we cannot neglect this urgent societal demand.

For more than 50 years, the Otto Warburg Medal has been one of the most prestigious life science awards in Germany. Out of 52 awardees, you are the third woman to win this prize. How does it feel to win an award in an obviously male-dominated research area?

I am extremely honored to win the Otto Warburg Medal, but as a scientist – not as a woman. Over more than 30 years in science and working with many male colleagues, I always felt treated as a researcher (a friend or a competitor) rather than a woman. The reasons for the current male domination in science are complex. One should not forget that only 50 years ago, very few women were able to embark on an academic career. The situation is changing now, and in some fields, for example in the RNA and translation field, there are now many outstanding female researchers who will win more and more awards.

Regarding the role of women in science: We have more or less equal representation at the undergraduate and graduate level but then a dramatic drop off of female scientists at the postdoc to group leader level. What do you think are the reasons, and how should we address this?

In my opinion, the major reason why female scientists often drop off is insufficient support in the phase when they raise the children. It is just much and too hard to combine ambitious competitive research with the demands of family, and given the uncertainties of an academic career and the fact that industry attracts the best at much better conditions, the choice is often against academia.

Many people still think that striving for an academic career means to be a nerd who works day and night, which is in fact not very appealing and not doable if you have a family. This image has to change: one can make an outstanding career in science and have wonderful kids, and in fact several colleagues of mine are exactly like that, having three or four kids and continuing to do fantastic science. This, however, can only work in a highly supportive environment and with a good organization. Although there is some progress to support families in terms of child care, for example, or support for attending conferences, there is still a long way to go.

What would you recommend to women beginning their career in the scientific field in terms of positioning themselves?

Be active and outspoken, follow your interests, and don’t give up if difficulties arise. 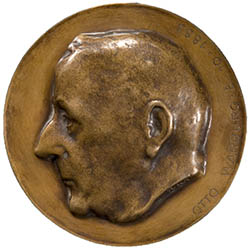 Since 2012, GBM has been cooperating with Elsevier and its flagship title BBA – Biochemica et Biophysica Acta (BBA). From their early beginnings, both the GBM and Elsevier have been devoted to supporting and enhancing excellence in research. With the Otto Warburg Medal, they join forces to acknowledge pioneering achievements by outstanding international scientists, thereby inspiring young researchers and attracting the wider public’s interest in science. Elsevier and its journal BBA are the exclusive sponsors of this medal, with a prize of 25,000 Euros to support continued research by the awardees.

Prof. Marina Rodnina is a Member of the Board of Directors of the Max Planck Institute for Biophysical Chemistry in Göttingen and a laureate for the 2019 Otto Warburg Medal. In 2016, she was awarded the prestigious Gottfried-Wilhelm-Leibniz-Preis. Her research on the workings of ribosomes has led to the discovery of a complex selection mechanism that helps minimize mistakes in protein biosynthesis. She is also responsible for the first recording of the phases of a ribosome in action, a process that only lasts a few milliseconds. The recording was possible through a technique called fluorescence measurement, a field in which her research group is world-renowned. The findings of her research can be applied to the development of new antibiotics. 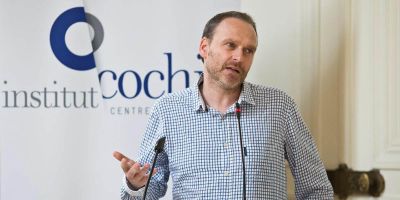 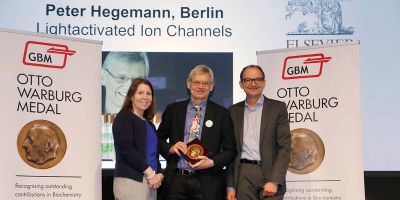 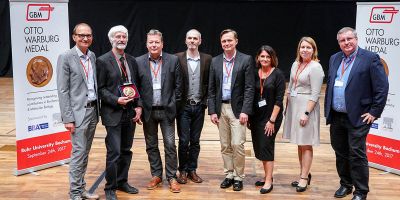