Study is the first to uncover a pheromone that activates physiological events required for ovulation and reproduction, according to researchers in Current Biology 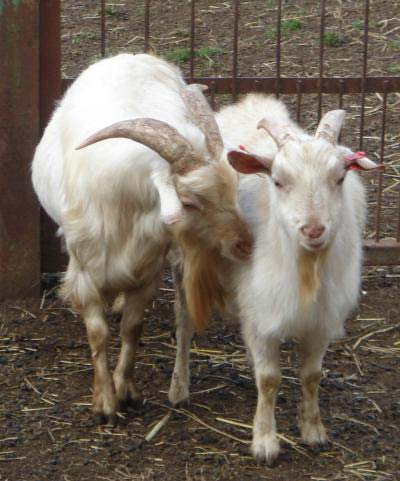 Anyone who has ever spent time around goats knows they have a certain smell. By carefully analyzing eau de male goat, researchers reporting in the Cell Press journal Current Biology today have now identified a novel, citrus-scented ingredient that speaks directly to the females. It acts on female goats' brains to turn their reproductive systems on.

The study is the first to uncover a pheromone that activates the central reproductive axis, according to the researchers. Although the work was done in goats, the researchers say there is reason to think the findings will apply to other livestock, and perhaps even to humans, too. After all, the researchers note, the action and structure of the brain's reproductive center is highly conserved among mammals.

In goats, the researchers already knew, it is the hair of males, not the urine, that shows "male effect" pheromone activity. Organic solvent extracts of male goat hair retain that activity, but a specific primer pheromone remained unidentified. Primer pheromones are those that elicit the long-term physiological events required for ovulation and reproduction, as opposed to more immediate sexual behaviors induced by releaser pheromones.

Associate Professor Yukari Takeuchi and Professor Yuji Mori in the Graduate School of Agricultural and Life Sciences at the University of Tokyo and colleagues decided to focus on components of that male essence, and particularly on the largely unexplored neutral fraction. They discovered that male goat pheromone is primarily synthesized in the head skin, so the researchers collected the scent they were after using a custom-made head cap. After collecting volatiles for one week from normal and castrated male goats, the researchers chemically analyzed what they had.

Those analyses uncovered several chemicals specific to intact male goats, including one in particular, 4-ethyloctanal, with the power to activate the gonadotropin-releasing hormone pulse generator in the female brain, which governs the reproductive endocrine system. The researchers were able to show the effects of that ingredient using a method they developed for real-time electrophysiological monitoring of a key part of the goats' brains.

"In 4-ethyloctanal, we identified a novel chemical that had never been demonstrated in nature before. This was our first surprise," Dr. Takeuchi said.

But there was more: 4-ethyloctanal oxidizes to 4-ethyloctanoic acid, a main ingredient of that "goaty odor" known for decades for its role in attracting females to males. "We are tempted to speculate that this is a clever reproductive strategy of the male goat to alter behavior and activity of the reproduction center in the female for mating by a single molecule," Dr. Takeuchi said.

The study is freely available on the Cell Press website for two months, until April 27, 2014: Current Biology, Murata et al: "Identification of an Olfactory Signal Molecule that Activates the Central Regulator of Reproduction in Goats"