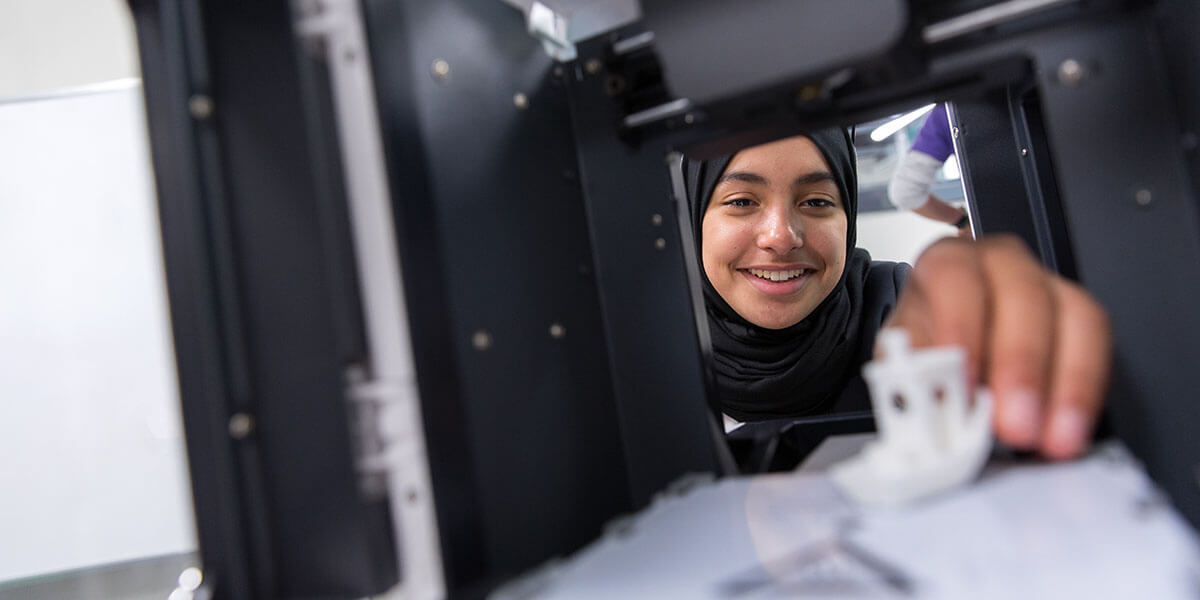 A student explores the possibilities of a 3D printer at the Reach Out Makerspace.

A bag to prevent backpain. A speaker that cools your drinks. A drone that delivers emergency supplies. Trainers that play music and generate energy. Adaptations for hearing aids to make them look more attractive for young children.

These are just a few of the ideas coming out of Imperial College London’s new space: The Invention Rooms. The zone blends an advanced university hackspace with a community engagement area and a unique “Reach Out Makerspace” for local young people.

Based at Imperial’s new White City Campus, the Maker Challenge pioneers a new form of outreach aimed at inspiring young people from hard-to-reach backgrounds to interact with science and technology through their own creativity. Armed with 3D printers, laser cutters, textiles, craft materials, wood and metalworking machinery, participants can engineer prototypes for just about any idea they come up with. 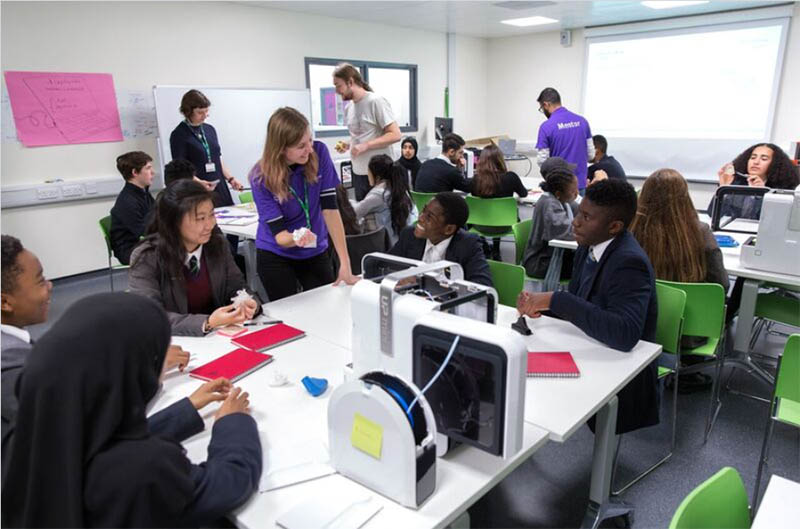 Makerspace Program Coordinator Kate Mulcahy launched the first cohort of 14- to 18-year-olds in September with about 20 teenagers, a third of them girls, from eight schools across White City.

“Some of the students are now starting to think about their final projects, and we have some diverse and ambitious ideas,” Mulcahy said. “One of them is working on scale prototype fire safety system for tall buildings, where in the event of a fire, foam is ejected from the base of the tower allowing people to jump to safety. Of course, this was a direct response to the Grenfell tragedy which is within sight of The Invention Rooms and has affected all the students in some way.

“I’m not a trained engineer, but I’ve always been interested in making – a tinkerer in the purest sense,” she said. “I’m trying hard to make the space like that. I don’t believe in elitism in making.” 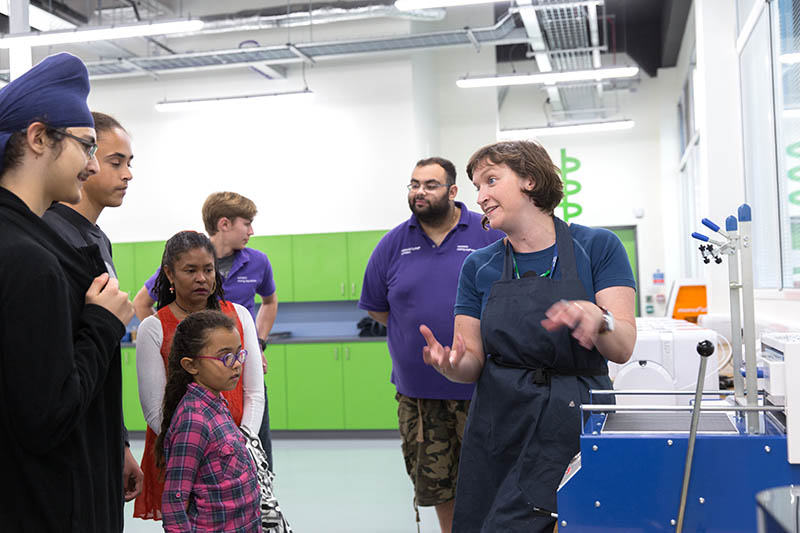 Many schools don’t have access to the kind of design technology equipment the Reach Out Makerspace provides, so the zone gives young people hands-on experience in designing and making.

The Makerspace builds on decades of Imperial’s more traditional STEM outreach, aimed at inspiring students regardless of background to consider STEM subjects at university. The Reach Out Makerspace involves local secondary students in an entrepreneurial program designed to help them take their ideas to working prototype and beyond.

The brainchild of Prof. Maggie Dallman, Associate Provost of Academic Partnerships, the Reach Out Makerspace is part of Imperial’s vision to inspire young people from all backgrounds by enabling them to experience and interact with STEM in new and creative ways while enhancing their soft skills and instilling a sense of entrepreneurship. She has tapped Imperial’s tech-inclined students to serve as coaches to the young participants.

This vision resonated with the Elsevier Foundation’s Diversity in Science program, which become an early adopter and funder of the Reach Out Makerspace, providing a $300,000 programming seed fund over 3 years. At the launch last month, Elsevier CEO Ron Mobed said:

The opportunity to become a scientist or technology expert should not depend on a young person’s economic status or cultural background. Imperial’s Makerspace project helps local school students to develop tech expertise and entrepreneurial skills to set them up for science and technology-based careers. Together with colleagues at Imperial, we’re looking forward to having some of our own Elsevier technology staff serve as coaches to help guide the students and to let them see how accessible and rewarding such careers can be. 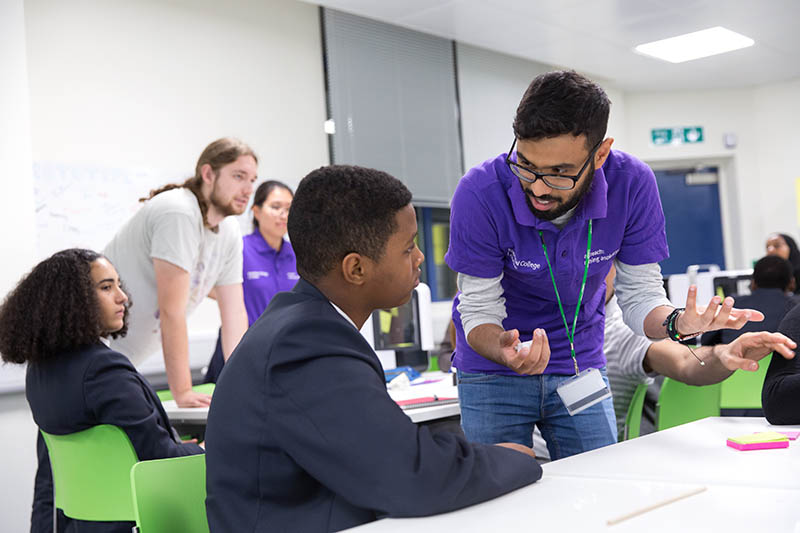 Dr. Dallman commented on the potential of The Invention Rooms and the importance of working with the local community:

This means listening to their needs, tapping into their talents, and – crucially – opening our doors. The Invention Rooms will be a beacon for community-driven innovation, channelling the energy and ambition of our neighbors and bringing local people together with Imperial staff and students to share in the excitement of science, discovery and making. The impact of this will be transformative, boosting opportunity, aspiration and innovation in White City and beyond for decades to come.

Some of the richest conversations surrounding the space have been with community organizations working on youth programs, and the program team view this as an opportunity to reach future participants who have not historically been engaged with these sorts of programs. Within the current cohort, there are a few individuals who attended the drone-building short course organized in collaboration with the White City Youth Club, and there is capacity to grow the reach of the program through connections like these. 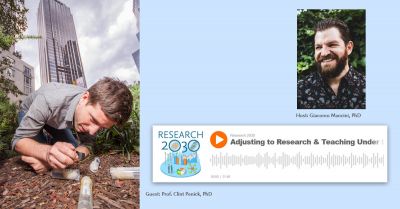 Research 2030 podcast: Adjusting to research and teaching under lockdown — the ants go marching on for Clint Penick
Nominations 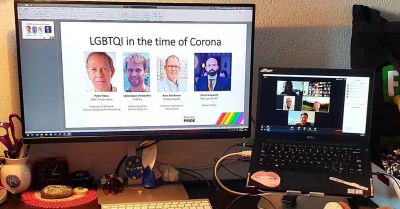 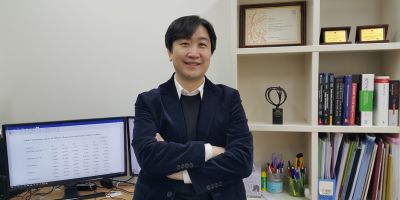 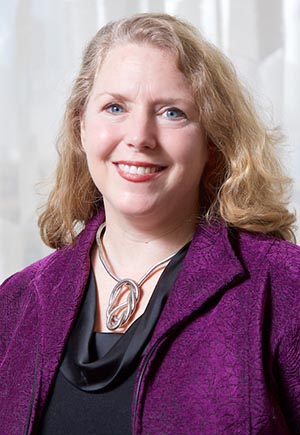 As the Elsevier Foundation’s Director, Ylann Schemm drives technology-enabled partnerships to advance diversity in science, build research capacity and support global health around the world. She has been an integral part of the Foundation’s growth since joining as a Program Officer in 2008. In 2019, Ylann was appointed the Vice Chair for the Executive Council of Research4Life, a UN-publisher partnership to bridge access gaps for researchers and doctors in developing countries. In addition, Ylann currently serves as Elsevier’s Director of External Partnerships, building on 15 years in corporate relations and responsibility roles and focusing on key technology, gender and sustainability collaborations. 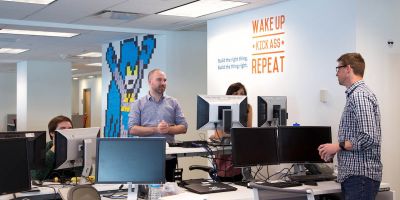 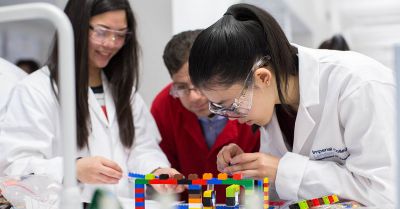 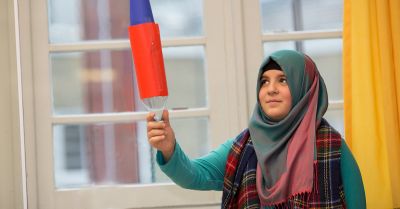 Children peering into their futures – this is rocket science