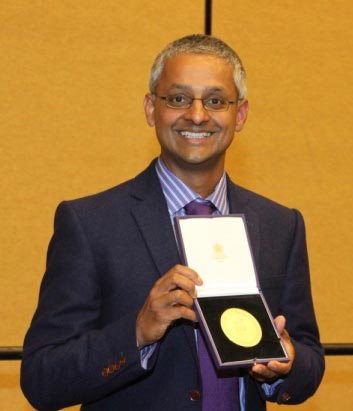 Professor  Shankar Balsubramanian, an Indian-born British chemist, was awarded the Tetrahedron    Prize for Creativity in Organic Chemistry & BioMedicinal Chemistry at the American Chemical Society meeting in San Francisco in August.

Based in University of Cambridge's Department of    Chemistry and Cancer Research UK    Cambridge Institute, Dr. Balasubramanian has made many seminal contributions to nucleic acid chemistry and biology. He is a world leader in the study of quadruplex nucleic acids and has elegantly    demonstrated their existence in human cells — a landmark study that can pave the way to therapeutic targeting of quadruplexes. He has creatively applied knowledge of nucleic acid chemistry to the invention of next-generation DNA sequencing, which is revolutionizing genetics and its application    to medicine.

As someone who used DNA sequencing on a regular basis when I worked in the laboratory, it was an honor to liaise with Professor Balsubramanian in the run-up to the prize session. As I read through his review article titled "Chemical    biology on the genome," I found that, combined with the scientific aspect, there was also a very human story about his early influences and his research. With his permission, I have condensed it below. The full review article is available in the Special    Issue of Bioorganic and Medicinal Chemistry, which you can read for free.

In addition, we recorded a short two-part interview with Dr. Balsubramanian, in which he talks about his research, the challenges he has encountered, and his advice to young researchers. You can view the videos below. 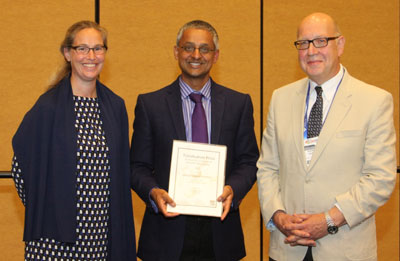 My parentswere immigrants from Madras (now called Chennai) in Southern India, and arrivedin the UK in 1967 when I was just 9 months old. After moving around the UK insearch of work and a place to settle, we eventually ended up living next to afarm in a rural part of Cheshire, somewhere mid-way between Liverpool andManchester.

Mychildhood was quite relaxed, and my parents raised me in a fashion that enabledme to freely explore my interests and discover passions, without prescribingwhat I should or should not do. I attended a small village school in Daresbury,founded in 1600, baring a weathervane with the Mad Hatter and Alice to rememberand celebrate the famous local, Lewis Carroll.

I wasfortunate in being taught by a somewhat old-fashioned and hugely inspirationalheadmaster, Mr. (Brian) Leitch. His relaxed style of imparting wisdom andinspiration, from the history of World War II to trigonometry, continues toprofoundly influence the way I think. At high school I developed a stronginterest in mathematics and the physical sciences. I did not pursue biology toany great extent, as I found it to be descriptive and imprecise.

I recall myhigh school chemistry teacher was somewhat disappointed that I wanted to studychemistry at university, as he felt I was "bright enough" to pursue medicine. Ilost touch with that teacher and so do not know whether he is stilldisappointed with my decision.

[pullquote align="right"]"I recall my high school chemistry teacher was somewhat disappointed that I wantedto study chemistry at university, as he felt I was 'bright enough' to pursuemedicine. I lost touch with that teacher and so do not know whether he is stilldisappointed with my decision."[/pullquote]

As anundergraduate, I studied natural sciences at CambridgeUniversity. This was a wonderful way to explore science, in a broad sense,whilst ultimately developing a focus in chemistry. I vividly recall my organicchemistry tutorials with the brilliant teacher Stuart Warren, who wouldtypically start by boiling a kettle of water with tripod and Bunsen burner toprovide us with a refreshing cup of Earl Grey tea, before quickly moving on tothe matter of disconnecting a challenging complex natural product on thechalkboard. It became clear that I wanted to go much further with chemistry.

I remainedin Cambridge to pursue a PhD during which my mentor, Chris Abell introduced meto mechanistic enzymology and cultivated my first adventures in chemicalbiology. At that time, Alan Fersht's relocation to Cambridge helped provideample local excitement at the chemistry-biology interface. I continued todevelop my interests as a post-doc in the lab of Stephen Benkovic at Penn State, where I firstencountered molecular biology (which is part of chemistry) and learned to thinkmore deeply about interrogating biology through chemistry and physical methods.I was expecting to stay in the USA, until Alan Fersht persuaded me that Ishould return to Cambridge to start my independent academic career.

In honor of Professor Balasubramanian's achievement, Elsevier's Chemistry group is offering free access to the latest Tetrahedron Prize special issue of Bioorganic and Medicinal Chemistry: Unlocking Nature Through Chemistry. It includes the full  version of the article above.

Professor Balasubramanian is also featured in this two-party video. Here you will find out more about his research, the challenges he has encountered, and his advice to young researchers.