The Scholarly Kitchen features a review of ‘Academic and Professional Publishing’ 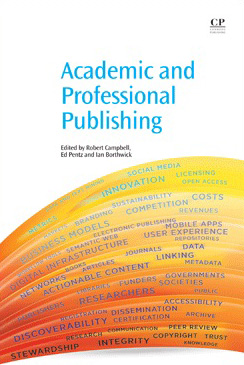 Academic and Professional Publishing (Woodhead Publishing Ltd.) delves into many aspects of scholarly publishing. In a recent post in The Scholarly Kitchen, the popular blog of the Society for Scholarly Publishing, Judy Luther reviews the book, calling it “a thoughtful overview of the landscape combined with an in-depth look at specific areas will be useful for anyone involved in scholarly publishing.”

One of these areas – about legal aspects and copyright – was written by Mark Seeley, Elsevier SVP and General Counsel, and Lois Wasoff, counsel to CrossRef and former Corporate Counsel for Houghton Mifflin , who runs a legal practice in the Boston area.

This chapter reviews the fundamental relationship between copyright and publishing, including contracts and licenses and piracy and enforcement. The authors discuss the management of rights in the digital age and the “orphan works” question in depth, alongside publishing agreements, creative commons and other licensing arrangements.

In a section about “changes in copyright law to address digital technology,” Seeley and Wasoff discuss “mass digitization and the Google Library Project.” They note that the question of the use of “orphan works” is a key controversy today and proposed solutions are varied. Some proponents suggest a collective licensing scheme through organizations such as the Copyright Clearance Center (CCC), or the Publishers Licensing Society (PLS) and Copyright Licensing Agency (CLA) in the UK, and some suggest a “safe harbor” for project organizers who make good faith attempts to identify rights holders. The latter is an approach that has been previously proposed in US legislation and might be re-introduced into Congress at some point. However, the authors point out that “due diligent” searches may not be feasible for truly “mass” projects (like scanning everything at a particular library).

They also address the open-access author pays publishing model and the use of Creative Commons (or similar) licenses for users. They describe how CC licenses work and point out that they are not the same as donating a work to the public domain.

On the piracy side, the authors address new forms of piracy, particularly online piracy and attempts to combat these activities.

In the conclusion, they write:

Advocates for the commoditsation of published information are often strident and sometimes, on a surface level at least, compelling (don’t we all want ‘information to be free’ of constraints?), but generally fall short of offering alternatives with sound financial footings to support the current and critical editing processes and publishing services. Publishers have adapted their business practices to accommodate some of the concerns that have been expressed. For example, certain publishers have begun asking for limited exclusive rights rather than copyright transfers; some are experimenting with or have adopted non-subscription business models such as the ‘author pays’ mechanism. The process is evolutionary and ongoing.

Public policy analysts should always consider that our world is currently rich, some might say awash, in high-quality published information. This is an enormous social good, and sets the bar high for the advocates of alternative approaches in discussions over whether their suggested approaches can support a similarly vital infrastructure of published content. As legislatures and courts continue to consider how copyright law will evolve in response to the changing digital landscape, publishers and authors must be prepared to carry the burden of demonstrating the value that they provide to knowledge, to learning and to society as a whole.