Laparoscopic hysterectomy with morcellation may be safer than abdominal procedure, study finds

With morcellation under scrutiny, researchers publish a decision tree analysis in the American Journal of Obstetrics & Gynecology

In a new study published in the American Journal of Obstetrics & Gynecology, researchers from The University of North Carolina at Chapel Hill compared the relative risks of laparoscopic hysterectomy (with morcellation) with abdominal surgery for hysterectomy in premenopausal women undergoing surgery for presumed uterine fibroids. Examining short- and long-term complications, quality of life and overall mortality, they found that abdominal surgery carries a higher risk of complications, decreased quality of life, and death.

Hysterectomy is the most common gynecologic procedure performed on non-pregnant women in the United States, and a diagnosis of fibroids (leiomyomata) accounts for many of these procedures. Minimally invasive surgery is being used more frequently because of its many advantages, including less pain and shorter length of hospital stay. But in some cases, the uterus cannot be removed without morcellation, or cutting it into pieces to fit through small incisions. However, morcellation has come under scrutiny because of concerns that if an undetected malignancy (leiomyosarcoma) is present, it may be dispersed into the pelvis and abdomen, resulting in the spread of cancer and increased mortality. This concern resulted in an FDA notification that discouraged morcellation during hysterectomy.

Given the rarity of leiomyosarcoma, a randomized trial comparing mortality after different types of hysterectomy is not feasible. Consequently, the UNC researchers used decision-tree analysis, which can compare the morbidity and mortality outcomes from a choice of surgical approaches, in this case, laparoscopic versus abdominal surgery. The model evaluates outcomes according to the probability of complications specific to laparoscopic and abdominal surgery. Researchers used results from published studies, selecting inputs from the highest quality and most recent studies to reflect advances in surgical practice. Ten studies were used to estimate the incidence of malignant leiomyosarcoma in women undergoing surgery for presumed fibroids.

Using a hypothetical cohort of 100,000 women over a five-year time horizon, the investigators found that, while there would be more deaths from malignant leiomyosarcoma with laparoscopic surgery (98 vs. 103 per 100,000), there were more hysterectomy-related deaths, for example, from blood clots after surgery, with the abdominal procedure (32 vs. 12 per 100,000). 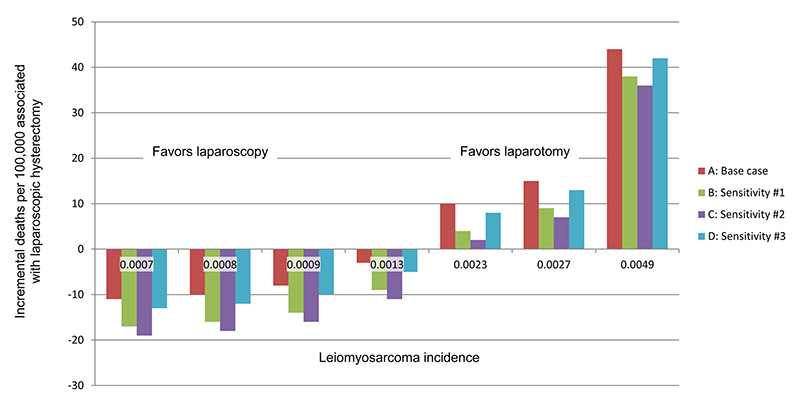 Sensitivity analyses were performed to assess the robustness of the assumptions in the decision model, including surgical complications, the probability of leiomyosarcoma, and probability of death from hysterectomy. The range of clinical outcomes (e.g., transfusion, wound infection,etc.) was evaluated by varying the input for each clinical event to its minimum and maximum.

No decision analysis is ever the "final word," and this one in this month’s AJOG is no different. New data will continue to be added to the literature and the conclusions might stand as they are or change. But, most importantly, Siedhoff et al remind us to keep the big picture in mind, to balance risks and benefits of different procedures, and to work vigilantly to decrease the impact of risks to the extent possible.

The American Journal of Obstetrics & Gynecology (AJOG), known as “The Gray Journal,” covers the entire spectrum of the field, from the newest diagnostic procedures to leading-edge research in specialties such as maternal-fetal medicine, reproductive endocrinology/infertility, and gynecologic oncology. It also publishes the annual meeting papers of several of its seven sponsoring societies, including the Society for Maternal-Fetal Medicine and the Society of Gynecologic Surgeons. The journal is published by Elsevier.