‘A Footnote on Allostery,’ written in 1965, is now available in Elsevier’s Journal of Molecular Biology

Dr. Stuart J. Edelsteinis Professor Emeritus at the University of Geneva in the Department of Biochemistry and Visiting Scientist at Babraham Institute in Cambridge, UK. An editor of this special issue, he arranged posthumous publication and has written a preface to place the text in context.

He received a PhD in Biochemistry from the University of California, Berkeley, in 1967, and spent a post-doctoral year at the Pasteur Institute in the laboratory of Dr. Jacques Monod. He was later a visiting scientist at the Pasteur Institute and returned in 1994 for a sabbatical leave in the laboratory of Jean-Pierre Changeux, with whom he continues an active collaboration.

His own research has been dominated by a long-standing interest in cooperative interactions of proteins and their ligands (see allostery classics), beginning with oxygen binding and the structure of hemoglobin. He has published over 100 research articles and six books. In 2003, he was awarded the Légion d'honneur by the French Prime Minister Jean-Pierre Raffarin.

Meghan Jendrysik also contributed to this report as Scientific Editor for the Journal of Molecular Biology. She is now Publisher for Elsevier’s Toxicology portfolio. [divider] 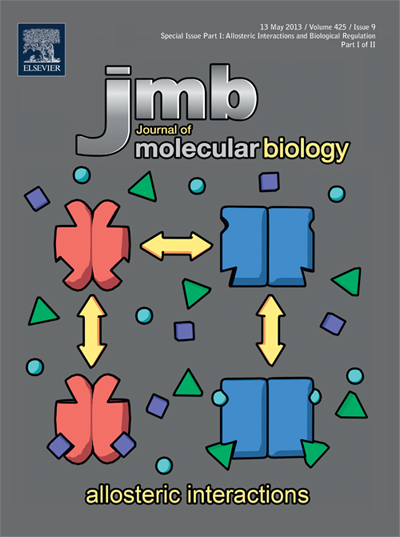 It is rare that an unpublished piece of research or theory remains significant after half a century. It is also a telling example of the boundless curiosity of the late Francis Crick.

A previously unpublished work by Dr. Francis Crick and Dr. Jeffries Wyman from 1965 is now available, together with Dr. Jean-Pierre Changeux’s recollections on the origins of the theory of Allostery and several important texts by various authors on the subject. These are part of a special issue of the Journal of Molecular Biology (JMB) published for the occasion of the EMBO Conference on Allosteric Interactions in Cell Signaling and Regulation, to be held at the Pasteur Institute in Paris, May 14-17, to mark 50 years of research on this subject.

Early in 1963, an influential theory was published by Dr. Jacques Monod, Dr. Jean-Pierre Changeux and Dr. François Jacob in JMB to explain how binding of a regulatory molecule could influence the binding of a completely different kind of molecule at topographically distinct sites. The word allosteric was invented, based on the Greekallos("other") andstereos("solid" object) and a conformational change postulated to account for the interaction between sites.

The theory was further extended in 1965 by Monod, Wyman and Changeux in a classical paper dealing in particular with the important threshold effects that accompany the binding of ligand molecules to regulatory proteins and that they assigned to the cooperative multi-subunit organization of the protein. One issue of the theory related to how the conformational transition involved in the signal transduction process was influenced by the number of sites for each ligand. [note color="#f1f9fc" position="right" width=400 margin=10]

Both of these articles are freely available in The Journal of Molecular Biology, published by Elsevier:

The Crick-Wyman manuscript proposes a somewhat different formulation of the Monod-Wyman-Changeux hypothesis through the critical analysis of how the regulatory performances of a monomeric protein are enhanced by their assembly into a cooperative structure. 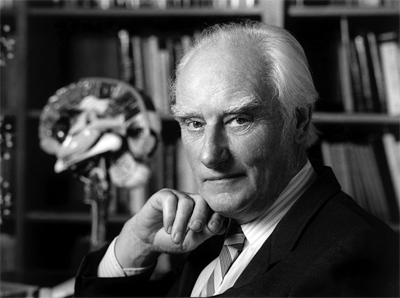 Francis Crick in his office. Behind him is a model of the human brain that he inherited from Jacob Bronowski. Photo by Mark Lieberman for Siegel RM, Callaway EM (2004) Francis Crick's Legacy for Neuroscience: Between the α and the Ω. PLoS Biol 2(12): e419. doi:10.1371/journal.pbio.0020419[/caption]

History of the manuscript

The first version of the manuscript was initially circulated within Jacques Monod’s group at the Pasteur Institute, but the text was never submitted for publication. Francis Crick had a strong impact in several areas of biology, but most scientists will be surprised to discover that he also took a strong interest in allosteric interactions. A major research institute bearing his name is currently under construction in Central London. Sir Paul Nurse, Chief Executive of the new institute and President of the Royal Society, commented on publication of the Crick-Wyman text:

As we enter into the final phases of construction of the Francis Crick Institute, it is satisfying to discover yet another feather in Francis Crick’s already crowded cap. Few knew that he took a serious interest in allosteric proteins and developed original ideas that after nearly fifty years still remain relevant to current research issues. Bringing this unpublished text to the scientific community is an exciting event to mark the 50th anniversary of allostery.

Francis Crick (1916-2004) was awarded the Nobel Prize in Physiology or Medicine in 1962 along with James Watson and Maurice Wilkins for their work describing the structure of DNA and its significance for information transfer in living things.

Jeffries Wyman (1901-1995), a distinguished physical chemist of proteins, was a founder and past secretary general of the European Molecular Biology Organization (EMBO).

Jean-Pierre Changeux completed his PhD with Jacques Monod on the bacterial regulatory enzyme, l-threonine deaminase, leading to the discovery of “allosteric” sites. He subsequently isolated the nicotinic acetylcholine receptor and demonstrated its allosteric properties. Changeux, a member of the National Academy of Sciences (USA), has received the Wolf and the Balzan prizes and is currently Honorary Professor at the College de France and the Pasteur Institute.

TheEMBO Conference on Allosteric Interactions in Cell Signaling and Regulationwill be held at thePasteur Institutein Paris, May 14-17, to mark a half century of research on this subject.It will include presentations by 40 world-renowned scientists, including seven Nobel laureates. The program comprises seven half-day sessions devoted to various subjects for which allosteric interactions play an important role, including enzymes, receptors, chaperones, ribo-switches, and complex molecular machines such as ribosomes, motors and replication complexes. An exhibition will be presented at the Pasteur Institute on the history of allostery and subsequent debates based upon original documents selected by Henri Buc from the Pasteur Institute’s archives. [divider]

Science writer Matthew Herper has written about this paper for Forbes: "Lost Paper for Co-Discoverer of DNA's Structure is Published."

The Wellcome Library has digitised the Crick archive, which includes "a footnote on allostery" See: http://wellcomelibrary.org/player/b18184352 (Login required, but you can use Twitter, Facebook etc).

"A footnote on allostery" in three texts, two typescript and one holograph, written in response to Monod, Wyman and Changeux (1965), "On the nature of allosteric transitions: a plausible model." The paper is accompanied by a covering letter (holograph draft, undated) from Crick to Wyman.

Also included in the file is [Monod, Wyman and Changeux], "A third power footnote about allosteric transitions" (carbon typescript), beginning "Dr Crick has written an interesting footnote to a footnote in our recent paper ..."

In addition, there are four letters (January to April, 1966) between Crick and Wyman, and a single letter (27 December, 1965) from Jacques Monod to Crick which contains detailed comments.