The Research & Academic Relations department conducts regular and ad-hoc research projects to provide insights on market changes and opportunities, product development and performance, and directly enhances editor, author and reviewer relations. In the context of the SciMaps project, this also includes a significant investment in R&D around bibliometric data and visualization.[/note]

How can a map of science be used to help children attain a greater appreciation of science? This was the question raised by the Places & Spaces: Mapping Science exhibit in 2012, with its theme Science Maps for Kids. Among the 10 finalists is an interactive map designed by a team at Elsevier showing how different fields of scientific research fit together as a whole and placing scientific stories that would be interesting to children into context.

The entry, titled The Fundamental Interconnectedness of All Things, shows a map of journals in many different disciplines, illustrating a variety of stories to inspire children. For example:

The map was developed from article and citation data in Scopus, the world’s largest abstract and citation database of peer-reviewed literature. Scientific fields are distinguished from each other by color, allowing viewers to see how one field fits alongside and interacts with others. For instance, the large swathe of “Medicine” journals are bordered by “‘Dentistry,” “Neuroscience”and “Psychology.”

Andrew Plume, PhD Each story is placed in context of at least one scientific field from the journal map.

Dr. Andrew Plume, Associate Director of Scientometrics & Market Analysis at Elsevier, was part of the team that developed the map. “The project started off as a curiosity: could bibliometric data be used in a novel way to appeal to a very different – and brand new – audience?” he said. “Ultimately we found stories that have immediate appeal for children, and using these we take the viewer into the world of published research.”

Science Maps for Kids is the 8th annual iteration of the Places & Spaces exhibit, which has previously covered themes such as Science Maps for Economic Decision Makers and Science Maps for Scholars. Each year, the exhibit selects 10 maps on the given theme, which will culminate in 100 maps after the 10th iteration in 2014.

In the words of Dr. Katy Börner, curator of Places & Spaces and Professor of Information Science at the Indiana University School of Library and Information Science: “Maps in the 8th iteration give children an opportunity to immerse in, explore and navigate the landscape of science and to find their very own place in science.” (Dr. Borner discusses “The Power of Scientific Mapping and Visualization” in the January 2012 issue of Research Trends, an online publication by Elsevier’s Research & Academic Relations group.)

Other contributions include maps from National Geographic showing the history of space exploration; the Metropolitan Museum of Art, with a child-friendly plan of the museum; and David McCandless of Information is Beautiful illustrating differences across the political spectrum. 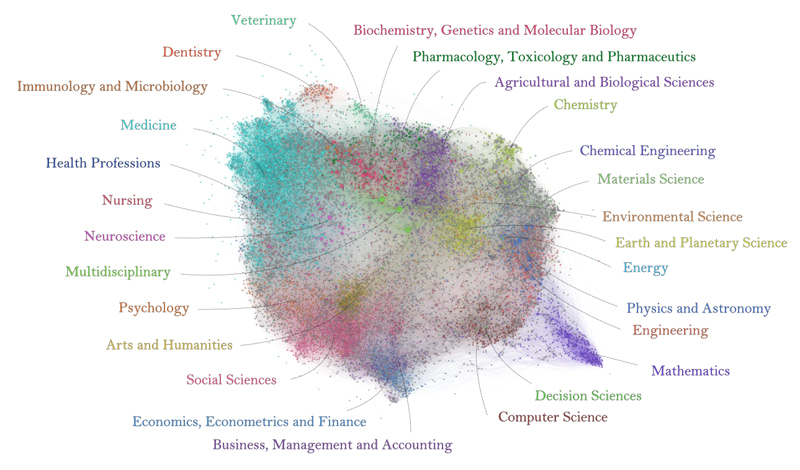 This Map of Science positions journals from across all scientific domains using citation data from Scopus. The methodology is described in this Research Trends article.[/caption]

The map of science used in Elsevier’s contribution includes more than 19,000 journals and takes into account almost 12 million citations to position those journals in the global research landscape. Different fields of scientific study are identified by color; on the final poster, these are annotated to show where one field merges into another. The full methodology behind this map was detailed in this January 2012 article in Research Trends.

The Elsevier entry was also developed in a dynamic format, which can be browsed by clicking or touching on areas of the map or on the stories which run along the top and bottom of the screen. The interactive view allows users to get more information on the different fields of science featured on the map, with a description and examples for each. The technology behind the map is Gephi, a freeware graphing program with a range of layout algorithms. ForceAtlas2 was selected because it can quickly position thousands of nodes and features many properties to refine the graph layout. As with many layout algorithms, ForceAtlas2 is force-directed, which means that unrelated nodes in the network repel one another, while connected nodes attract one another. In this case, the magnitude of these forces was determined by the proportion of citations given by the citing journal to the cited journal out of citations given to all other journals in the network.

How do I procure one of these posters? It's terrific!

Hi Patricia, thanks for your comment! Copies of any of the "Places &amp; Spaces: Mapping Science" maps (not just ours!) can be purchased by following the instructions here: http://scimaps.org/store/. Best wishes, Andrew