In the year E+1: a Mendeley update

On the anniversary of joining Elsevier, Mendeley’s co-founder reflects on the challenges, surprises and new opportunities 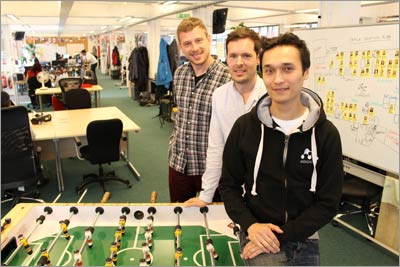 Exactly one year ago, on 9 April 2013, Mendeley — the company I founded with my two friends Jan and Paul — was acquired by Elsevier. Our journey had begun almost exactly six years earlier, in April 2007, when we signed a contract with a Belarusian outsourcing company in Minsk to develop the first prototype of Mendeley (then still named "Literacula"). The acquisition by Elsevier marked an important milestone in our journey, and moreso: many new beginnings, too.

For myself, it has brought a move from London to Amsterdam. In addition to my role at Mendeley, I became VP of Strategy at Elsevier last July. It meant leaving behind the manic commotion of the Mendeley office in Clerkenwell for the calmer — if also more corporate — environment of the Elsevier headquarters in Sloterdijk. My task here was (and remains) to share our vision with the various Elsevier product teams, enable them to build on Mendeley's capabilities, develop new product and business opportunities, and be a voice for the research community and their needs.

Coming to Amsterdam, my concern had been that some could see me as "the upstart" who had arrived to tell them "how things are done." As it turned out, the opposite was the case: Teams from all across the company, from publishing to operations to product, were eager to work with Mendeley and learn about what had made it successful — the close collaboration with our community, our third-party developers and, in particular, our group of Mendeley Advisors.

The Mendeley team has ramped up from around 50 at the time of the acquisition to 80 now — the biggest growth spurt of our company ever — and we still have a lot of open positions in our London office. Among the many new hires, we have finally had the chance to bring in an Android developer, thus fulfilling the all-time number 1 user request in our feedback forum. We are also building a team that will look at how Mendeley can help solve workflow problems associated with research data management and Open Data.

Most importantly, however, the backend integration with Elsevier's systems and the new hires are laying the foundation to significantly improve Mendeley's core functionalities around document management and annotation, collaboration and writing. Already, we have enabled one-click export to Mendeley from Scopus and ScienceDirect, and we are trialing innovative new approaches to peer review in Mendeley Groups with Elsevier's publishing innovation team. In the not-too-distant future, we will help our users maintain better research profiles to showcase their work and evaluate their impact, drawing on the market-leading citation and publication data from Scopus and research intelligence from SciVal.

In keeping with our community ethos, we have continued to partner with third-party apps like LabFolder, with Open Source projects like CSL, and with libraries and library consortia to make our users' lives easier. There are more partnerships like these in the pipeline, branching out into other areas of the academic workflow.

Of course, the integration also brought new challenges. Somewhat surprisingly, joining a publishing company initially didn't make our relationships with other publishers any easier. In fact, after the acquisition, the number of takedown notices we received from other publishers for content that our users had posted on their Mendeley profiles increased. To comply with DMCA rules (as we always have), we had to remove those publications (in some cases even if they complied with SHERPA/RoMEO policies), which understandably upset the affected users. We have since put a lot of effort into building relationships with other publishers and also academic societies, to develop ways in which they too can benefit from Mendeley's growth and the altmetrics our community generates.

Another strain felt by the Mendeley development team was the effort required to link up our systems with Scopus, ScienceDirect and other backend tools, sometimes at the expense of pushing forward the development of Mendeley Desktop, Mendeley Web, our new iOS app, and our revamped Open API. Major decisions can now take longer, too: Whereas Jan, Paul and I would previously huddle in a meeting room, work out a plan, then put it into action that same day, these days we have to ensure that what we propose also makes sense for the other teams within Elsevier to avoid roadmap collisions down the line. Due to the complexity of the many moving parts, this can sometimes take weeks and meetings across several continents! Yet, once the inertia has been overcome and the freight train is in motion, the added benefits of scale and access to Elsevier's resources become visible.

Does that mean that all of the concerns our community had when we were acquired have been addressed? Perhaps not all of them, but along with the announcement, we asked our users to give us time and judge by our actions whether Mendeley would remain true to its vision, ambition and spirit. I believe the past year has shown that we have, and that we will. Our Mendeley Advisor community is thriving and continuing to provide us with valuable feedback. Over the course of the next year, our users (and those of other Elsevier products) will increasingly enjoy the fruits of deeper product integration between Mendeley and the world's leading provider of science and health information. 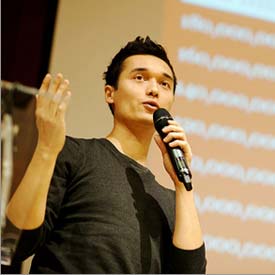 He holds a PhD from the Bauhaus-University of Weimar, where he researched the role of emotion in consumer decision making. His research was published in Psychology & Marketing, the Journal of Marketing, and in Media, Culture & Society. In his first year as a PhD student, he also won the Overall Best Conference Paper Award at the largest academic conference in the field of marketing, the AMA's 2005 Summer Conference in San Francisco – and was told by the conference chair that his academic career could only go downhill from there. Nonetheless, the Foundation of the German Economy kindly decided to grant him a doctoral dissertation scholarship in 2006, and the Royal Society of Arts elected him a Fellow in 2011.

At the Bauhaus-University, Victor was also frequently cast in student short films, despite a visible lack of acting talent. He compensated by organizing the "Guru*Talk" lecture series with German film industry luminaries, which was later turned into a book on the future of the film industry, and consulted for film production companies.

Prior to having had all this fun, he completed an MBA at the WHU Koblenz, the Université Libre de Bruxelles and the Handelshøyskolen BI Oslo.Victor has also worked as a Talent Scout A&R for Sony Music/Columbia Records in Berlin, and in various roles at punk/garage label Revelation Records in Huntington Beach, California. Realizing that one couldn't make a living with the music he loved, he moved on to Munich-based film producer/distributor Helkon Media, which promptly went bankrupt (not Victor's fault).

Later, in parallel to writing his MBA thesis, he also co-founded the Korova Bar in Vallendar which, if nothing else, taught him how to use dangerous power tools.

Congratulations! More power to Mendeley-Elsevier synergy. Your emphasis on your collaboration with developers and the community of advisors is truly admirable.

Thank you, Glenn - we intend to keep it that way!

Congratulations, Mendeley. The show must go on.