In the news: 'The IKEA effect: when labor leads to love' 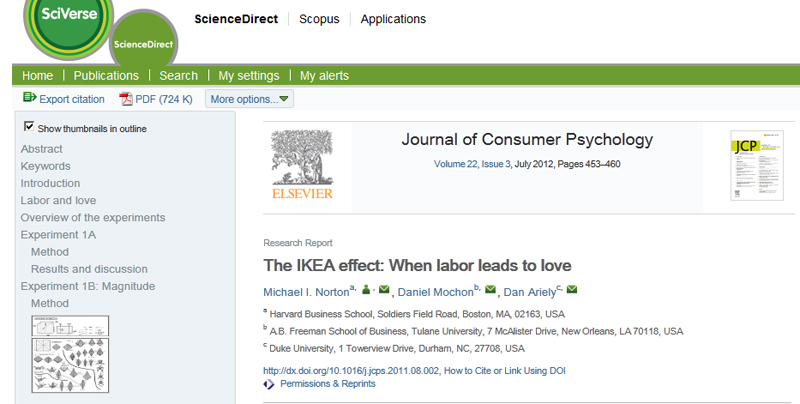 Three professors wrote about the IKEA effect in Elsevier's Journal of Consumer Psychology in July, introducing the term and concept into popular culture.

In July, Elsevier's Journal of Consumer Psychology featured an article called "The IKEA effect: When labor leads to love," authored by Dr. Michael I. Norton of Harvard Business School, Dr. Daniel Mochon of Tulane University and Dr. Dan Ariely of Duke University. Their premise: If you build it yourself, you will value it more. As they explain in the abstract:

In four studies in which consumers assembled IKEA boxes, folded origami, and built sets of Legos, we demonstrate and investigate boundary conditions for the IKEA effect—the increase in valuation of self-made products. Participants saw their amateurish creations as similar in value to experts' creations, and expected others to share their opinions. We show that labor leads to love only when labor results in successful completion of tasks; when participants built and then destroyed their creations, or failed to complete them, the IKEA effect dissipated. Finally, we show that labor increases valuation for both “do-it-yourselfers” and novices.

Today, their study — and author Machon — were featured onNPR's Morning Edition, one of America's most popular radio shows. Their segment was aptly called: "Why You Love That Ikea Table, Even If It's Crooked." 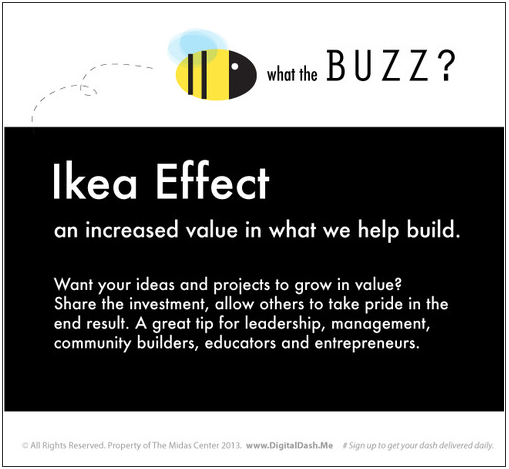 It was also featured by Andrea Cook (@andreacook) on her blogDigital Dash. In her words:

The idea is this: people value the items they help create. Much like that IKEA furniture that comes in a gazillion pieces tucked tightly in a cardboard box, the project of building it into the finished piece of furniture fosters pride. This pride in the process is understood to add more value to the finished item. Researchers are calling it the IKEA EFFECT.

She relates this phenomenon to effective leadership and management with the following tip: "Want your ideas and project to grow in value? Share the investment, allow others to take pride in the end result."

Andrea Cook is a digital communications expert, founder of The Midas Center, an event correspondent and the creator of Digital Dash, which she describes as "a social project that infotains with visual transmedia on today's trending topics."